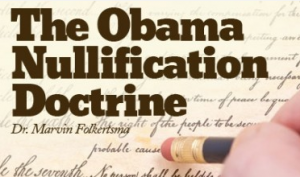 In December 1828, South Carolina had 5,000 copies of John C. Calhoun’s “Exposition and Protest” printed and distributed throughout the state. A defiant document, Calhoun’s “Exposition” outlined a theory of constitutional interpretation first adumbrated in the infamous Kentucky and Virginia Resolutions, which asseverated the right of states to declare “null and void” acts of the federal government within their respective jurisdictions. These instances of the nullification doctrine were based on the view that certain acts of the federal government could be deemed unconstitutional by state authorities and reserved to states the option of interposing their sovereign will between their citizens and officials attempting to enforce national law.

In his “Disquisition on Government,” which appeared two decades later, Calhoun explained, “It is this negative power—the power of preventing or arresting the action of the government—be it called by what term it may—veto, interposition, nullification, check, or balance of power—which, in fact, forms the Constitution.”

In short, a valid Constitution should allow any of its constituent parts to interpret its terms any way it likes, regardless of the Supremacy Clause, or those pesky introductory words to the acclaimed document, which state, “We the People”—or the first Article of the Constitution, which assigns to Congress the authority to make national law. More remarkably, Calhoun admitted in a letter written to a colleague in 1832 that the real inspiration for his nullification doctrine was safeguarding the power of the South to preserve its peculiar institution: slavery. Clearly, depraved intentions spawned this nefarious constitutional construction by Southern elites: preserve your political power by any means possible.

Interpretations like this lurk beneath the Obama administration’s recent non-enforcement of federal law. For instance, President Obama’s Department of Justice declared in 2011 that it regarded The Defense of Marriage Act (DOMA)—duly enacted by a majority in Congress, to use the president’s sophomoric constitutional reminder—to be unconstitutional and would no longer defend it in court. Oh, really? What happened to Article Two, Section Three of the U.S. Constitution, the part that enjoins the president to “take Care that the Laws be faithfully executed?” DOJ insisted it would continue to “enforce” the law, but still has managed to ignore it in several cases involving immigration and gay marriages, as pointed out by Representative Vern Buchanan (R-Fla.), one of which involved the department “vacating” a decision made by the Board of Immigration Appeals involving a gay man. And “not defending” a law in court on constitutional grounds is tantamount to lack of enforcement, because the bottom line is: if you don’t like federal law, simply don’t enforce it. Which is the federal version of nullification.

Nowhere has this nullification doctrine been more apparent or more maddening than the federal government’s refusal to enforce national immigration laws. Further, the Obama administration has announced that it no longer will abide by the so-called 287(g) agreements with the state of Arizona. These agreements permitted state and local authorities to assist in the enforcement of federal laws on immigration. Of course, if you have no intention of enforcing the law anyway, federal authorities certainly don’t want states to do it in their absence. Also, since national policy in this area has been significantly determined by executive order—since the president’s de facto amnesty announcement for children of illegal immigrations—neither Congress nor the American states seem to have any role to play.

And the nullifications keep on coming. On July 12 the Health and Human Services Department announced that it was granting waivers to certain states from the work requirements of the 1996 Welfare Reform Act, perhaps the signature achievement of the Clinton administration. Republicans reacted with predictable outrage, but also with a constitutional case to make, centering on HHS’ lack of legal authority to administer by regulation what it is denied to do by law, one that has been regarded by most observers as a huge success. As far as HHS is concerned, none of that matters, which is another egregious case of what critics have termed “executive overreach.”

But the HHS decree represents much more than that. In fact, there has been considerable commentary on Obama administration policies under the rubric of the “imperial presidency,” a term that dates back to the 1960s. However, the real doctrine is more threatening and the dangers are far deeper; the Obama-ites are not just doing their “imperial presidency” thing; they’re practicing nullification, with designs on power as suspect as those that inspired that interpretation’s notorious roots. Indeed, if the dark visage of John C. Calhoun were somehow to encounter the administration of Barack Obama, one can easily imagine a thin smile of approval cracking his stony expression. Nullification remains alive and well, though this time in federal clothing.