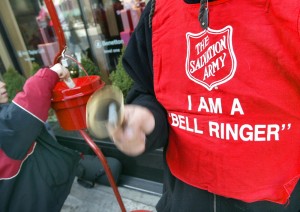 From the time of its founding by William Booth, the Salvation Army sought to help the poor, homeless, destitute and outcast. Booth endured beatings and humiliation for fearlessly proclaiming Christ, Who was born into the world through a poor, homeless, unwed teenager.

The Salvation Army loves the unlovely.

Which makes the latest news about the Salvation Army so distressing and perplexing. Is another honorable Christian institution losing its moorings, straying from its Biblical foundation?

WND reports that the Salvation Army International’s Social Justice Commission now supports abortion in foot-in-the-door cases. The kind of cases that appear to drip with compassion as they fundamentally deny the humanity of unborn babies.

“The Salvation Army believes in the sanctity of human life. Humankind was created in the image of God (Genesis 1:27). All people – without exception – are of value to him, holding a special place in his creation (Psalm 8:5), irrespective of age, gender, race, religion, health or social status, or their potential for achievement.”

It then contradicts that encompassing declaration with exceptions for when an innocent life can be snuffed out, such as rape, incest, the baby has a fatal abnormality, or threatens the life of the mother. That is, people who are too young, or too unhealthy, or whose social status is the child of a criminal, or potential for achievement is limited to hours, days or months after birth.

Following the Salvation Army’s counsel would mean that the only touch that severely disabled babies would ever feel is not the loving arms of their mother, but the sharp blade of an abortionist.

We’ve seen this play before. Dehumanize people, then, somehow, it’s OK to deny them the basic human right to live.

Here’s a simple treatment for this philosophical defect: place the same argument in a different scenario. Should an 8-year-old child of a rapist be killed? Should a man diagnosed with cancer, given 6 months to live, be dismembered?

Attorney and author Rebacca Kiessling – who was conceived through rape – was disheartened by the Salvation Army’s position. She told WND:

“They say that God defends the weak and those who are marginalized and that He is a God of justice, but the Salvation Army has now marginalized children like me who were conceived in rape. In other words, they support the death penalty for innocents like me who were conceived out of violence. Yet the Bible says that a child should not be punished for the crimes of [his or her]father.

“The Salvation Army is all about rescuing treasures and trading beauty for ashes with the used clothes and household items people donate to them, but they can’t seem to do the same for rape victims and their children.”

The Salvation Army has an admirable history of reaching the most outcast and shunned in society, the broken and destitute, the hardest of cases. This policy treats the most shunned and broken of unborn babies, the hard cases, and shuts them outside humanity’s house.

The Salvation Army’s powerful TV ads focus on the people they’ve helped, once hopelessly lost but now found. Perhaps now it’s the Salvation Army that needs to re-focus, to see the forgotten, invisible people, the children in the womb.