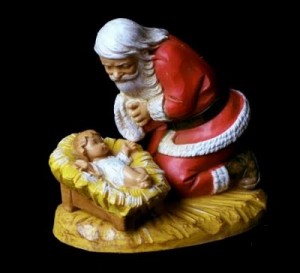 Yes, the to-Santa vs. not-to-Santa debate within the realm of our Catholic Christian community is fresh, real and has turned heated.

How did this develop? I believe that just as suddenly-well-meaning friends and acquaintances exhibit concern over homeschooled children ‘missing’ a grand social experience, as in some variation on the well worn and ever predictable: “So, you homeschool? Ah. Do your kids have any friends?” that non Santa-ers among us feel compelled to address our outright Santa-ing. As if to fill us in on a great truth.

The fact is, the non-jolly-old-elf-believers say, as long as the Incarnation of our Lord is paramount within our family’s catechesis, Santa Claus is permissible.

Well, thank you for the green light, non believers.  But, I kinda think that’s preaching to the choir. Pun intended.

As a Mom who absolutely, unequivocally and whole heartedly does the ‘Santa thing,’ was raised as a believer and married a believer, I can tell you that those of us who do the (considered by non Santa-ers) wretched-yet-required annual Santa events: waiting on line at a sometimes-cheesy-but-always-mood-setting temporary  ‘North Pole Workshop’ for the picture; setting out milk and  homemade cookies for the head elf and carrots for his reindeer on Christmas Eve; annual reveling in Clement C. Moore’s classic; leaving much thought-out thank you notes under the tree for gifts that graced our den last Christmas morn…….well, yes, I am here to affirm that we actually and truly do place the birth of our Savior at the forefront of our celebrations.

Rest assured non-believers; I can affirm with certainty, the following truths, as can any parent of believing children:

My children’s psyches will not be damaged because they are ‘deceived,’ resulting in hefty trust issues upon their adulthood.

My children’s cognitive development is not arrested because they have ‘fallen for’ the scientific inaccuracies that entail one rather heavy old man in an enormous gift-packed sled being pulled by eight gravity defying reindeer to children the world over.

My children will not suffer a traumatic blow when met with news that Santa is not ‘real.’

My children will not have a distorted sense of the True Meaning of Christmas.

I don’t. Nor does my husband. Nor do any of the millions of Santa believers the world over. I know this with certainty.

Because we recognize that Santa Claus is continuing the tradition made great in the fourth century by the much beloved Nicholas, Bishop of Myra, who gave humbly and generously to those in need. And to all.

Because we have come to embrace as part of our Catholic legacy that he was hell on heretics and took no grief from non-believers in the One True Lord.

Because belief in Santa does not make Christmas commercial or secular or lessen the beauty and the awe that we feel when we truly ponder the mysteries of the Incarnation, the Immaculate Conception and the Salvation into Eternal Life that we are offered as a result of the birth of this defenseless Babe in a dirty stable over two thousand years ago.

Parents of Santa believers and non-believers alike have instilled in their children a deep admiration for St Nicholas. He is a role model. He is a hero. He was The Enforcer and the Walker Texas Ranger of his time. All in the name of defense of his Faith. Our children may look to him as a moral barometer and a model of love for our Holy Mother Church as they grow to adulthood in our current culture of spiritual depravity.

What of the Santa-compared-to St Nicholas debacle? Santa, too, gives without compensation. Only that the children to whom he gives, believe.

If belief in Santa offers our children another avenue to the understanding of the Lord’s depth of mercy, giving and second chances whenever we really need them, than who are we to doubt? Who are we to question others’ traditions?

When my youngest works diligently to learn a hymn on piano which he desperately hopes to accompany the choir; when my oldest is honored to serve Christmas Eve mass; when both are eager to read for the O Antiphon days around our Advent wreath, I know that my children understand the reality of our Christmas celebrations.

When our houses are places of prayer, when we try to speak grace-filled words amongst each other, when our to-do list is comprised of all things unseen, isn’t that what the Lord asks?

Isn’t that what we all attempt despite our differing traditions?

The Lord’s ways are not always our ways and, we all know, are not always explainable. The goodness and kindness that the Lord wants us to seek and emulate might just be found for any of us, at any age, in the form of a red-suited, white-bearded, jolly, old elf who resides at the top of the world.

And really, why question that?