Trending Now
You are at:Home»Columnists»The Ship of the Soul
By Msgr. Richard Soseman on February 28, 2012 Columnists, Featured, Live in Christ 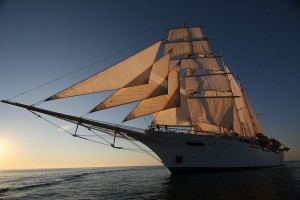 Gustavus Adolphus is known as one of the greatest kings Sweden has ever had.  He was very proud of Swedish power, and during his reign he triumphed over armies of what today are known as the nations of  Germany, Poland, Denmark, Finland, modern Sweden and other areas.    He ruled very powerful armies, but was a bit dismayed that his navy was not well respected as he hoped it would become.  Because of this, he determined to build a new flagship for his navy, desiring to design the finest ship ever, until that time, employing many innovations.

This ship was known as the Vasa, after his family name.  No expense was spared in its design or decoration, it was meant to represent the expansionist efforts of Sweden, and his own glory.  The finest woods and metals were employed, the latest in armaments were mounted, and the greatest of craftsmen were employed to put on the finishing touches.  Sadly, the expense of expert advice was spared in the design of the ship, but not to save money.  Instead, Gustavus Adolphus himself desired to design the ship according to the features he adjudged to be finest in the ships he had seen.

There were probably doubts about the construction of the ship, but these were never taken too seriously, as haste was taken as the day of launch, in 1628, neared.  On the day of launch the King was onboard, along with the sailors and their families.  The ship looked glorious, with beautiful sails and riggings designed –not  to be most functional — but very beautiful, with hand carved wooden rails and all manner of sculptured figures, representing mythical figures, mermaids, sea monsters and other subjects.  The ship was launched with full ceremonials and fanfare and was towed out into the sea.

It was there that the sails of the Vasa took on its first wind, a very light breeze according to witnesses, and began to move on its own.  A few hundred yards out into the port, the ship rocked onto its side once as a result of the slight breeze, and then a second time.  The second time the gun ports began to take on water, the ship capsized and sank, having sailed a total of 1 nautical mile.  It was later found that the keel was very shallow, much too shallow to add any stability to a boat which was so top heavy.

Many of us, through the goodness of God, and using the gifts and talents he showers upon us, are able to provide rather comfortable lives, for ourselves and for our families.  This is a good thing, as God has created the world for our enjoyment, for our benefit, and there are very good and beautiful things in nature, and which man has been able to construct through his ingenuity.  Never forgetting those who are most in need, never forgetting our obligations to Church and State, we are able to make comfortable lives for ourselves and our loved ones.   Goals which many of us have include  a home in a good neighborhood, a car decked out with amenities, tuition for good schools, wireless internet, satellite TV, and good food, among other luxuries.  Most of us, living as we do in modern economies,  are able to manage some of these, whether eating out includes for us the Victor Hugo on the 2 etage of the Eiffel Tower, or Olive Garden once or twice a month, whether our clothes be Yves St. Laurent or good, comfortable boots and jeans from Farm & Fleet.

So, most of us live good lives, at least to others; our friends and neighbors probably feel that we do pretty well.  We must make sure that our external lives, the lives we present to our friends and families,  are matched by interior lives which also feature many fancy adornments.  We can ask ourselves if we spend time in prayer.  Do we read Holy Scriptures or some other spiritual book or website regularly?  Do we attend Mass on Sundays and Holy Days?  How long since we have been to Confession, to scrub our souls?  Do we at least look at our lives daily or weekly, examining our consciences and practices to make sure that we are not becoming farther from God?  If we don’t look at ourselves once in a while, if we don’t ask the right questions, we run the risk of spiritual peril.

Just like those who failed to ask questions about the luxurious ship Vasa, because they didn’t want to put a damper on the glorious launch day, we can fail, ourselves, to ask questions which could help to straighten out our lives.  Just like that beautifully adorned ship which sank when it first encountered a breeze, if our greatly enhanced lives are not built upon a solid spiritual foundation, we too can founder when a challenge presents itself:  our child fails a class, our new car is hit and damaged, someone we love comes down with a life threatening illness.  Even minor stress can capsize our ship if we have a weak spiritual foundation.  If we don’t have a solid spiritual foundation, if we don’t meet Christ on Sundays in the Sacraments and daily in prayer, just like that beautiful ship, we may founder and sink.

We should not despair; instead we should redouble our efforts every day this Lent to enhance that spiritual keel, to make sure that the our life is built upon a solid foundation, and not only stabilized on a pile of sand.  We should not despair in this, though, because as our Lord said, “For man it is impossible, for God all things are possible.”

Give thanks to our Lord for all the good things you have.  Use them and appreciate them as good parts of God’s creation.  Don’t forget, though, at the same time, to make sure your spiritual ship is solidly built.