Trending Now
You are at:Home»Learn & Live the Faith»Apologetics»The Silence of the Shepherds: The Nation and the Church Gone Astray
By Louie Verrecchio on November 14, 2012 Apologetics, Columnists, Featured 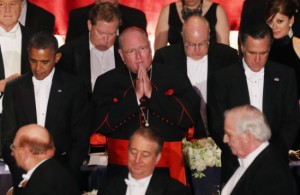 In the days following last week’s U.S. presidential election, a staggering amount of analysis has focused on Republican messaging, demographics and core constituencies — so much so that the fundamental point has been missed entirely.

If the Second Coming of Obama is evidence of anything, it is the godlessness of our nation, the majority of whose citizens worship an idol who not only grants free license to practically every immoral impulse one can imagine, but who also evidently demands human sacrifice to the tune of more than a million innocent souls each year.

This culture of depravity is the result of an underlying spiritual malady that has been allowed to fester and spread over the last five decades virtually unopposed by the only force capable of overtaking it.

The United States – a land wherein class-envy passes for compassion, same-sex “marriage” is accepted as fairness, and contraception is considered a matter of healthcare – is about to reap the just rewards, not so much of a nation that has abandoned the principles of its Founding Fathers, but of a Church that has abandoned its Founder and the mission He has given her.

I could go on, but presumably you get the point. The true cause of the nation’s most serious challenges – economic, social, and political – is really no different than it was for Israel some 3,000 years ago:

“These will be the ways of the king who will reign over you,” says the LORD… “He will take the best of your fields and vineyards and olive orchards; the tenth of your grain and of your vineyards and give it to his officers and to his servants. He will take your menservants and maidservants, and the best of your cattle and your asses, and put them to his work. He will take the tenth of your flocks, and you shall be his slaves. And in that day you will cry out because of your king, whom you have chosen for yourselves; but the Lord will not answer you in that day.” (cf 2 Samuel 8:11-18)

In spite of the valiant efforts of Samuel and those other intrepid prophets of old, who spoke on behalf of the Lord who said, “I am your Holy One, your Creator, your King,” the people Israel would not listen. The results are well known.

In the present case, the new People of God – under the feckless leadership of a hierarchy too timid to speak on behalf of its glorious King – have abandoned Him in favor of a president who has made clear his intention to persecute the Catholic Church by force of federal law.

As difficult as it may be to accept, Barack Hussein Obama, that anti-Christian oppressor and extraordinary purveyor of evil, is precisely what the American people, and especially the American Catholic Church, deserves. Yes: Precisely what it deserves.

And when comes the day that the tyranny of Obama and his ilk break our backs and force us to our knees, the Lord will not answer our cries because justice will demand His silence. This, my friends, is the price that the entire nation must pay for the failure of the Catholic Church to faithfully perform its divinely-assigned duty.

For more than forty years, the overwhelming majority of our prelates have been unable to muster the gumption to even hint at the sovereign rights of Christ the King over society. Yet many of these very same men have routinely leveraged the power of their exalted office to breathlessly invoke the “rights of the human person” in support of destructive Democrat policies and programs masquerading as valid expressions of Catholic social doctrine.

If the bishops, including the Bishop of Rome, would speak of the Social Kingship of Jesus Christ one-tenth as often as they speak of “human dignity, then the “dictatorship of relativism” that is dominating the global socio-political order might be felled.

Based on recent events here in the United States, however, even this is apparently asking too much.

Just weeks before the election, Cardinal Timothy Dolan – the most visible member of the hierarchy in this nation – wined and dined Barack Obama at the annual Al Smith Dinner, where he publicly anointed him an “honorable man,” while praising him for his “love for God and country.”

Seriously? How is a man who aggressively promotes intrinsic evil, and claims to be a Christian even as he actively persecutes the Church that Christ established, considered honorable? Can anyone, Cardinal Dolan included, point to a shred of evidence that isn’t offset tenfold by evil that indicates that Barack Obama has a love for God?

Even in an age when the majority of the episcopate has long since exchanged apostolic zeal for weak-kneed kumbaya craziness, Cardinal Dolan’s public act of infidelity is an embarrassment to the Church. It accomplished absolutely nothing — save confirm the wayward in their error.

Is it any wonder the majority of self-identified Catholics voted as they did?

After the election, faced with the stark realization (one hopes) that the national flock is teetering on the brink of full blown spiritual bankruptcy, Cardinal Dolan offered his congratulations to the president on behalf of the American bishops, saying:

“We pray that you will exercise your office to pursue the common good, especially in care of the most vulnerable among us, including the unborn, the poor, and the immigrant. We will continue to stand in defense of life, marriage, and our first, most cherished liberty, religious freedom.”

While graciousness in defeat is perhaps a virtue (assuming, of course, that Cardinal Dolan doesn’t consider Obama’s reelection a personal victory), I cannot for the life of me conjure up even one good reason to lump the “unborn” together with the rest of the “most vulnerable among us,” especially given the current political climate wherein the party in power advocates for the widespread extermination of the former.

And can our bishops, please Lord, temper this blather about “the first most cherished liberty”with an occasional reference to the first demand of justice: namely, the duty of every man to offer worship to the one true God, not in the religion and manner of his choosing, but in the divinely established Church of Christ.

To be clear, while I considered my own ballot for Mitt Romney a vote in favor of a step in the right direction, I do not wish to imply that such a vote was a de facto vote for Christ.

What I do wish to state, in the strongest terms possible, however, is that invincible ignorance aside, there isn’t one single solitary person who worships the one true God of Abraham, Isaac and Jacob who cast a vote in favor of Barrack Obama.

At the end of the day, America’s woes can be boiled down to good old fashioned godlessness. You are either with God — or you are against Him. In the case of election 2012, the godless prevailed because they have been failed by the Church.

Perhaps the dark days ahead will jolt the sacred hierarchy out of its collective slumber; emboldening them to set aside all worldly preoccupations, and to carry the light of Christ into the world and to proclaim His Kingship once more. This must be our prayer.