Trending Now
You are at:Home»Columnists»The Sinners Will Stumble
By Marge Fenelon on April 4, 2011 Columnists, Live in Christ

Let him who is wise understand these things;
let him who is prudent know them.
Straight are the paths of the LORD,
in them the just walk,
but sinners stumble in them. (Hos 14:10) 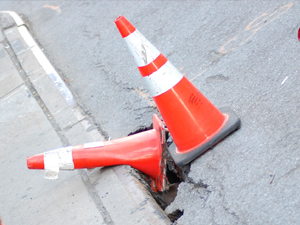 This passage from Hosea reminds me of a lesson my dad taught me when I was in my early teens. I was really angry with someone for something they’d done to me. Two “friends” of mine had set up one of those catty ambushes that young teenage girls justify by declaring that they have the right and obligation to know who likes them and who does not, who is popular and who is not.

Friend #1 invited me to her house to hang out with a mutual friend. When I arrived first, she suggested that we play a “joke” on the other friend by having me hide in the closet until she told me to come out. Being the extremely gullible child that I was, I did it.

When friend #2 arrived, my friend started asking her about me, prodding for her honest opinion and urging her to express how she felt about me. What she said was cutting, judgmental, and – to say the least – uncharitable. I was horrified! Feeling completely betrayed, paralyzed by hurt and not knowing what else to do, I stayed in my spot.

Suddenly I heard friend #1 call out, “Hey Margaret, you can come out now.”

At this point, there was nothing left to do but come out, so I did. I took one look at each of them – the smirk on friend #1’s face and the surprise on friend #2’s face – and ran out of the house, never to return.

When I sobbingly told my dad about the situation, he gave me the exact opposite advice I’d expected. Rather than helping me figure out how to “get them back” he told me to let go of my anger, leave them alone and go find some new friends. He insisted that I not seek retaliation in any form.

At first I was confused and agitated, but then he explained, “There was a guy at work once who double-crossed me, and I hated him for it. I wished bad things on him and looked for a way I could get him back. Then there was an accident, the guy got caught under one of those big steel coils and it severed his arm. I never wished anything bad on anyone again. I learned that God will take care of people who do dirty things to others; I don’t have to. That accident shook me so much that I’ve never wanted to get back on anybody again.”

What’s more, Dad was the foreman of the steel yard in a factory that made auto frames, piping and other heavy-duty steel products. The steel yard included huge cranes that would pull garage-sized coils of steel off trains and prepare them for further processing elsewhere in the plant. As foreman, it was his job to take charge whenever there was an accident – and there were plenty. Dad was working on the day his adversary lost his arm, and so Dad had to stabilize the man, get him into the ambulance, search for the severed arm, wrap it in newspaper and transport it to the hospital in hopes that it could be reattached. No wonder this incident so deeply impacted my father!

Dad’s recounting of the story impacted me, too, and still does to this day. Although there have been many times when my fist was ready to swing back, I withheld, thinking again of the man with the severed arm and Dad’s conviction that those who do dirt to others will, sadly, get theirs in the end. Like the prophet Hosea, Dad knew that the sinners will stumble of their own accord; we don’t have to help them by sticking our foot out.