Trending Now
You are at:Home»Columnists»Winning the Parent Lottery: An Interview with Fraser Heston, Son of Charlton Heston
By Peggy Bowes on April 4, 2011 Columnists, Featured, On TV and Movies 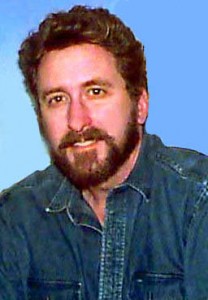 Fraser Clarke Heston is the son of the late actor Charlton Heston and his wife of over 60 years, Lydia Clarke.  Fraser directed his Oscar-winning dad in several films, including the recently released DVD set, Charlton Heston Presents The Bible.  Fraser also played the role of baby Moses in The Ten Commandments.  I recently spoke to Fraser about his famous dad, his adventurous mom and his own Hollywood projects.

Bowes: As executive producer of Charlton Heston Presents the Bible, what was your biggest challenge in bringing these ancient stories to life?

Heston: This project began with a conversation my dad and I had.  He wanted to record his favorite stories from the Bible.  We were originally going to do it on film here in Hollywood but then decided it would be better to go to the Holy Land and film it on the ground where the stories took place.  He wanted to perform his favorite stories and then comment in a sort of personal essay fashion in between the chapters.  Dad was able to walk the ground and sweat under the same sun and be in the same dust that some of the Biblical characters had walked themselves so many years before.  I think the biggest challenge was to take this marvelous, amazing document, this incredible work of art and theological resource, and turn it into something entertaining and informing and personally rewarding for my father and me.  I think ultimately we succeeded in all those things.

Bowes: I really enjoyed watching Charlton Heston add drama and depth to so many familiar Bible verses.  It 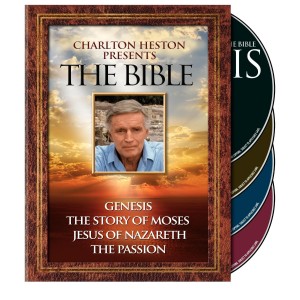 reminds me of the difference between reading Shakespeare and Seeing it performed on stage.  Has -this film inspired more people to actually start reading the Bible?

Heston: I hope so!  It’s a good parallel with Shakespeare.  We used the King James version, which is not the most popular version today.  But it is the richest, in terms of language.  It is the most poetic, the most moving version, I believe, of all the translations.  It’s the version my dad and I grew up with.  He turned it into what you might call a Shakespearean-style performance, and that language comes alive when it’s spoken aloud.  It’s meant to be spoken aloud.  Yes, I do hope it gives people of all faiths enough interest and intrigue in the text itself to go back and read the Bible, whatever version you choose.  It’s marvelously rewarding.  Dad often said he was neither a priest nor a scholar, but he was a storyteller.  These are the greatest stories ever told.

Bowes: During the “Behind the Scenes” feature on The Bible, DVD set, you joked that your mom, actress Lydia Clarke, was a female Indiana Jones.  How did your adventurous childhood affect your career as a director, producer and writer?

Heston: From a very early age, I was dragged along on what I used to call “Ruin Running” and “Museum Marching” expeditions.  Mom would get us up early to drive out to the pyramids of Egypt or explore the Roman Forum or the Roman ruins in Spain or France, or the pyramids in the Yucatan.  Wherever we happened to be, there was some archaeological adventure to be explored.  At the time, I was perhaps not as enthusiastic as I might have been, but I think some of that rubbed off.  My own taste for history, archaeology, adventure and travel came from my mom as much as my dad.  My dad was very content to hang out at his home up in the Hollywood Hills and play tennis with his friends and spend time with his family.  That was an ideal weekend for my dad.  My mom was a traveler and an adventurer.  She’s still with us and lives in the same house my mom and dad lived in for 60 years.

Bowes: Can you tell me more about your next project, The Search for Michael Rockefeller?

Heston: We’re just finishing that and premiering it at the Sonoma Film Festival next month.  It’s the story of Michael Rockefeller, who disappeared in New Guinea in 1961 and the search for him ten years later by a man named Milt Machlin who went down there looking for him on the rumor that he still might be alive.  Milt didn’t find Michael, but he found a great story.  As it happens for us, he also filmed it.  He was never able to complete the film.  It was never edited, and I found it so many years later and managed to put it back together and make a new documentary out of it, so that’s what we’ve done.  There were so many interesting new revelations, a lot of new footage no one has ever seen, a lot of eyewitness testimony, and various theories as to what happened to him.  Was he simply drowned at sea?  Was he eaten by cannibals?  Is he still alive, living in the jungles like some white god?  Fascinating theories— all of them have some basis in fact.  You can go to our website, www.SearchForMicahel.com to watch the trailer.

Bowes: I think it’s interesting that you chose Agamemnon as the name for your film company.  As a mythical Greek hero, he was asked to sacrifice his daughter to the gods in a story similar to that of Abraham and was eventually murdered by his own wife.  Why this particular tragic figure?

Heston: First of all, he is a Homeric hero.  I love the story of Troy and a thousand ships and all that.  Also, Agamemnon by Aeschylus is one of the oldest plays.  Aeschylus, I believe, is the oldest of the Greek playwrights, and this is one of his early ones.  It’s just a marvelous example of how all drama goes back to the classic structure of Greek drama, in my opinion.

Bowes: I read that there was some excitement on the scene of The Ten Commandments when you played baby Moses and the basket began to sink.  What happened?

Heston: I’m sure my presence was exciting enough! [Laughs.]  When I was about three months old, I found myself floating down the Nile River on the back lot of Paramount in this little basket, and indeed the basket did begin to sink.  Dad ran out there to rescue me and bumped into the social worker who the state mandates has to be on set when there are any infants around.  She said, “Oh no, Mr. Heston!  I’m the only one who can pick him up in front of the cameras.”  According to him, he turned to her, using a voice with only slightly less octane than he used on Pharaoh and said, “Give me that child!”  I don’t know what happened next, but I imagine she turned me over to him. 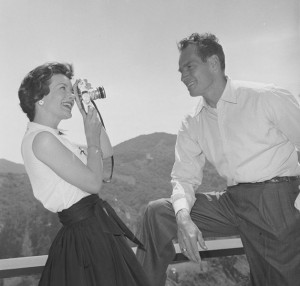 Bowes:  Your parents were married for over 60 years, a rarity in Hollywood.  What do you think was the secret to such a lasting marriage?

Heston: Dad used to say that, “The secret is having a perfect husband, and I happen to be a perfect husband.”  My mom was asked if she ever considered divorcing my father.  She said, “Divorce?  Never!  Murder?  Often!”  I think that the secret is you have two loving people who are willing to work out their challenges together and to face them together, whatever they may be.  I won the parent lottery.  They were amazing parents — loving and caring but not overly protective.  They gave me a lot of freedom to have my own adventures and make my own mistakes, which you have to do.  I was very, very fortunate in that way.

Bowes:  You refer to your dad as “Chuck” during your “Behind the Scenes” interview on  The Bible, DVDs.  Was your adult relationship more of a business partnership or a working relationship than a father-son bond?

Heston:  It was both, and we were very close as father and son and never had any sort of bad patch or estrangement as unfortunately does happen to a lot of folks.  When we became business partners and artistic collaborators, if anything, it made us closer.  He’s very easy to work with.  He was a wonderful director’s actor.  He could be directed and you could talk to him about the subtleties and nuances and try for something a little better, a little different; to dig down deep and reach for that performance.  He never took it personally if you wanted to do another take or ten more takes.  Or if you didn’t like his ideas, you’d come up with something better.  In that sense, it was a great experience for me and I hope he knew how much it meant to me when I was in my 30’s and 40’s to be able to work with him as an adult.
___________________________________

You can read my recent review of Charlton Heston Presents The Bible at this link http://www.catholiclane.com/dvd-review-charlton-heston-presents-the-bible/ . Several other Charlton Heston movies have been recently released on DVD, including Soylent Green, Antony and Cleopatra, Mother Lode (with Kim Basinger), and Treasure Island (with a young Christian Bale), due out this fall.