Trending Now
You are at:Home»Featured»The Triumphs and Failures of Feminism
By Dale Ahlquist on December 14, 2011 Featured, Women 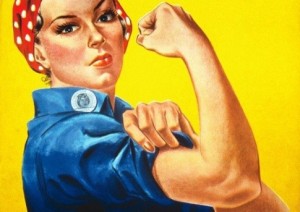 Some of the worst feminists are men. The classic feminist is a woman, of course. She emerged as a public spectacle about a century ago and has become something of an institution in our own time—thanks to the state-supported propaganda of our public schools and the history-by-pictures that passes for education. She is pictured as an oppressed creature breaking free from a social prison run by men. It is an image pretty well ingrained in the American mind. The demand for equality has a noble ring to it. It sounds like a cry for justice. But seeking equality with men was, as G.K. Chesterton, pointed out, a step down for women. That is probably why it was only a minority of women who embraced feminism. They were, as Chesterton said, simply guilty of “the plodding, elaborate, elephantine imitation of the male sex”—a description strikingly void of noble-sounding adjectives.

Chesterton explained that the main weakness of the feminists was that they believed all the silly claims that men made about the importance of politics. Most women were smart enough to let their husbands go off to argue in pubs and the clubs, since it accomplished very little and generally didn’t interfere with the real business of life, the drama of the home and the family. Men claimed politics was important; women knew better. They knew what was really important: shaping the minds and souls of their children in the ideal and independent setting of the home. But there were a few women, usually those whose upper class privilege had already separated them from their children, who fell for the male bombast and got political. Chesterton warned that if women got involved in politics it would have the dreaded result of making politics look more legitimate than it was. It would give cause for the government to grow in its reach and influence and eventually impose itself on every aspect of our lives. The result would be the weakening of the authority of the family and the strengthening of the authority of the state. History has shown that his warnings were justified.

Some may consider women getting the right to vote to be the triumph of feminism. But since feminists were a minority, the vote actually did not give them much of a voice. The real triumph of feminism was the legalization of abortion. The argument that women have the right to kill their own babies is not based on any known legal precedent, any traditional understanding of human rights, or any classic, civilized moral teaching. It turned the family violently inside out, making the very heart of the family its lethal enemy. But the feminist argument won…because a few men fell for it.

And there are still men who fall for it. In spite of all the evidence that feminism has failed—the broken homes, the day care generation, the wistfulness of working mothers, the fallout from promiscuous, loveless sex, and most of all, the deep regrets over abortion—the feminist flame still burns. But it is not women who have kept the flame alive. It is men. It is men failing in their masculine role. The male feminist has been the one of the worst influences in modern society. He represents the loss of chivalry, the loss of manliness, the loss of fatherhood, and the loss of authority.

Chesterton called feminism the hatred of all things feminine. The most feminine thing of all is motherhood, and the hatred of motherhood is epitomized by abortion: the gruesome slaying one’s own baby in an act that is defended as a right.

The loss of the distinctive roles of the sexes—what Chesterton calls “the distinction of dignities between men and women”—has had grave consequences for our society. The problem with the sexes today, he says “is that each sex is trying to be both sexes at once.” Feminism, which set out with women trying to be more like men, has only succeeded in getting men to be less like men. And women are letting them get away with it.