Trending Now
You are at:Home»Featured»Book Review: Economics for Helen
By Peter Chojnowski on December 14, 2011 Featured, On Books, The Economy

Economics” is the name which people have come to give to the study of wealth. It is the study by which we learn how wealth is produced, how it is consumed, how it is distributed among people, and so on. It is a very important kind of study, because it often depends upon our being right or wrong in economics, whether we make the whole State poorer or richer, and whether we make the people living in the State happier or not.1

By giving us a title such as Economics for Helen (apparently dedicated to Belloc’s adolescent niece), Hilaire Belloc, in 1923, was emphasizing something that many others at the time, such as the Solidarist Heinrich Pesch, 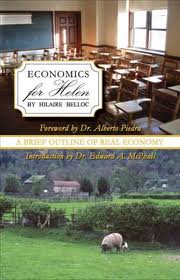 were also emphasizing. Economics is a human science about the very basic functioning of human society. It was a discipline that was not something abstract and unintelligible to the average man; rather that economics, as the study of the production, use, and distribution of wealth, was, in its basic concepts, accessible to all. With this conviction in mind, Belloc sets about denning and indicating the relationships between the basic concepts employed in the science of economics, such as wealth, land, the means of production, and capital. For example, one could not hope to even understand the scope of economics if one did not know that “wealth,” which is the proper object of the science of economics, was properly defined, not as something possessed by someone, but as “those values attaching to material objects through the action of man, which values can be exchanged for other values.”2 With this essential definition, we can understand “wealth” to be something necessarily social and civic in its very nature. With the social and civic dimension, we also enter into the moral dimension of human existence on account of the concern for justice that is part of man’s inherent conception of his life lived among other men.

Even though Belloc understands clearly this necessary and essential link between the economic and the moral, in Economics for Helen he specifically indicates that the operation of economic laws and the demands of the moral law are two distinct things. Likewise, he further identifies the parameters of economic science by stating that,

The science of economics does not deal with true happiness nor even with well-being in material things. It deals with a strictly limited field of what is called “Economic Wealth,” and if it goes outside its own boundaries it goes wrong.3

There are several aspects of this text, which open up new vistas for those seeking an alternative to the materialistic determinism of both the Marxists and the Economic Liberals. All of these insights, on the part of Belloc, into the very fiber of the economic life of man, point to the fact that economics is grounded in two realities, both of which the Capitalists and the Socialists have overlooked: the divinely ordained goal-orientation of human nature and the freedom of choice originating in the spiritual principle of man, which is his soul.

What these two facts indicate is that economics is grounded in the psychological, spiritual, and intellectual life of man to such an extent that the orientations and demands of this life create economic facts and laws that cannot be circumvented. One mentioned by Belloc is the idea of “subsistence.” According to Belloc, “subsistence” is “the worth while of labor.” By this, he means that if a certain standard of living were not provided to the worker, on account of his work, labor itself would no longer be thought to be worthwhile and, hence, would not be engaged in. Belloc identifies this as an economic law, rather than a moral law. Here we see the advancing of a concrete example of an “economic law” which all nations and economic concerns must adhere to if they are to maintain a healthy economic life. Moreover, Belloc implicitly refutes his accusers who charge him with collapsing economic law into moral law. If a nation does not provide its people, in their generality and in their individuality, with work that can sustain a man and his family at levels acceptable within the context of the national culture, men will not work and the nation will not prosper. Of course, it is the obligation of the State to ensure that companies and enterprises uninterested in providing subsistence wages do not simply locate their factories in foreign countries and export their products to the “job-free zones” of the “developed” countries.

The economic laws governing national economies also affect the outlay of capital. In this regard, Belloc affirms that “capital,” or “already-made wealth which man uses with the object of producing further wealth,” does not merely exist in capitalist countries. Just as “property,” or “lawful control over a piece of wealth,” continues to exist in communist countries. The only relevant question here is “who owns or controls the capital and property present in a nation?” Upon the answers to these questions rides the determination of the economic system under which the people of a nation live.

Having spent the first part of Economics for Helen delineating, in logical sequence, the various concepts that make up the science of economics, starting with wealth, moving through a consideration of the three elements necessary for the production of wealth, and arriving at the three parts into which produced wealth naturally divides (i.e., rent, interest, and subsistence), Belloc devotes chapters to two topics that render the definitional aspects of the earlier pages more immediately relevant and politically charged. Those two topics are money and banking.

In regard to money (i.e., currency) and banking, it is important to mention here that Belloc shows himself to be a perfect economic realist when he clearly states that both currency and some type of banking are the sine qua non of a complicated and advanced national economy. When money or currency is simply a medium of exchange, which is used to facilitate transactions between individuals with heterogeneous goods within the context of an economy based upon a highly specific division of labor, it serves as a useful human tool. When the currency becomes mere fiat money or, as Belloc calls it, “wretched bits of paper” (i.e., money to which the government or the “currency markets” assign a value consonant with their own needs but based upon no objective and regular standard of worth, like gold) then the nation with such a currency will see the greatest instability and social manipulation brought about by inflation and price fluctuation.

It is, however, the consideration of modern banking, as this began to flourish in England and Holland during the 17th century, which provides the incentive for Belloc to consider those economic systems (i.e., the Servile “slave,” the Capitalist, the Socialist, and the Distributist), which would struggle for supremacy in the last three quarters of the 20th century. Again, as in his consideration of paper currency, Belloc states that the origins of the modern banking enterprise were innocent and obvious enough. Men who have capital to save look for those who have the means to guard deposited wealth. Those who control the deposits of others agree to return the money deposited to the depositors when that money is demanded. However, the bankers soon find that only a small percentage of the deposited savings are demanded at any one time, hence, rather than allowing large amounts of wealth to lie “unused,” they “invest” the money to make more money. As this lucrative enterprise gains momentum, “partial reserve banking” (i.e., the system in which only a portion of deposited funds are actually “on hand” in the bank for the depositor to withdraw-the rest having been “invested”) and usury (i.e., the taking of interest on non-productive loans) become more and more the order of the day. It is by these means that the bankers gradually gain a stranglehold on the financial resources of the nation. This clout even outweighs that of the capitalist who owns the means of production (e.g., factories, machinery, land, tools), since it is to the banker that the capitalist must go if he is to launch into any new enterprise, always, in current circumstances, being “short” of capital. This situation continues to the point where:

[t]he bankers can decide, of two competitors, which shall survive. As the great majority of enterprises lie in debt to the banks-any one of two competing industries can be killed by the bankers saying: “I will no longer lend you this money”….This power makes the banks the masters of the greater part of modern industry.4

The part of this text that might aid those unfamiliar with Belloc’s Distributist thought is the section of the text on the “political implications” of his economic analysis. Here we find Belloc giving succinct definitions of the major systems which have, throughout the history of mankind, ordered the distribution and control of property, property being, of course, a necessary part of human society. Without some specific entity (e.g., corporations, guilds, governments, or private individuals) controlling every single item and piece of property in the world, those unowned items would eventually cease to be of any use to man, and “rot.” The question that makes for the division between the various economic systems is, “Who controls the process of production in any particular society?”

It is advisable that those who see Belloc as a “closet Communist” read carefully his portrayal of the socialist economic system. He both views it as unworkable and states that it is totally contrary to his own wishes and intentions. Whereas Belloc wishes men to become masters of their own fate by possessing the property necessary to direct and sustain a life of fulfilling and efficacious work, Socialism, and its extreme form-Communism-would take such power and property out of the hands of the family man and put it into the hands of bureaucrats. In Belloc’s own words, such a system would involve “complete surrender of personal honour and freedom and appetite.”

If we, in the nascent 21st century, wish to sustain our honor, freedom, and happiness, Helen must not be the only one reading this text.