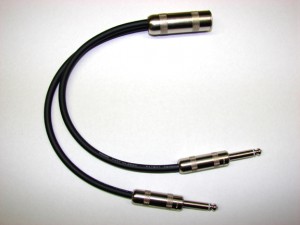 We were presenting a marriage preparation class to thirty-five couples the other day, and wanting to give them the best experience possible, we had all the latest presentation tools – well almost. We had hoped to show the newest USCCB video, “Saying I Do” but a simple little cord was needed to get sound to the whole room. My mission: get the “Y” cord.

After waiting forty-five minutes for the guitar place to open ,I confidently asked for a Y cord, to which the tattoo laden, half asleep young man answered, “Which one?” This was not a question I was prepared to answer. Silly, old lady me, I thought there was only one. Using my spiffy camera phone I took pictures of the various possibilities and sent them to Rob our techno-wizard/youth minister. As the minutes clocked by, I wondered why the delay in his response and looked at my phone. After all we are all trained with the new technologies to get instantaneous world wide information in seconds. The little blue spinny thing indicated that it was still trying to send the pictures. I walked outside and held my phone up high hoping this would get it a little closer the satellite for faster sending capabilities.

That didn’t work and I looked like an idiot to the other tattoo laden, gauge incrusted young folks having their morning smoke outside.

Plan B was go inside and take a stab at the possibilities, as time was of the essence. I made my purchase feeling pretty confident that I had the right pluggy things to go in the correct receptors. At the break we anxiously plugged all the right cords into the right places and we still seemed to be missing one simple little cord. This was beginning to feel like feeding a mouse a cookie.

We ended up just sticking a microphone by the LCD projector to pick up the little bit of volume coming from there. It sounded muffled and dull, so much for wowing them.

If technology is supposed to make our lives so much easier, why does it feel so difficult?

I found myself thinking of Christ’s Sermon on the Mount. Unavailable were Power Point, or Prezi, a sound system or sound tech. He didn’t have the Apostles set the mount with special effects to dazzle the crowd in the pre-concert show. Lacking were the huge jumbo-trons with giant images of Christ while he spoke.

The Apostles had a hard enough time figuring out where to get enough food to feed everyone, imagine if they were sent out to find a Y cord.

So much today we rely on technology when we do our presentations to blow the minds of our audience, tickle their gray matter, and titillate their senses. Mostly I think, they get lost in all the fanfare and completely ignore what is being said…or worse we lull them into a coma like state.

This all leaves me in a bit of a quandary. Jesus I am not.

I imagine the kind of hold Jesus had on His listeners. They hung on His every word, let it sink in, roll around in their minds and produce a response. Sometimes it was positive, and transformative. Other times, negative and people picked up stones. That means He got their attention, because they were listening. So what will we do in the future as we have many more classes to teach and couples to impact?

I think I will try and minimize the effects and maximize the message. It means I need to know my message and, more importantly, know Who it comes from. Do I trust that the Holy Spirit can work in these fickle modern times when we depend more heavily on gadgets and gimmicks to get people’s attention than on the words themselves?

Jesus is after all is the Word.

That Word, His Word, has the power to cut through to the bone and into the marrow; to pierce hard hearts, to plant seeds on fertile ground, and to set souls on fire.

It will take prayer, lots of prayer. It will take surrender to the Holy Spirit to lead, to trust, to guide. It will take courage beyond measure to entrust our audience to God and let ourselves be His conduit to bring His electrifying message home to darkened hearts.

While the task sounds daunting, and scares the crud out of me; it is also a grand relief. The unbelievable stress that malfunctioning, nonfunctioning and crashed equipment has caused me over the years has aged me a decade. If it can go wrong, I have found it does. I am tired of placing my trust in manmade material and it is time to plug into the Divine.

Pray for me. Pray for us, and pray that our listeners will open their hearts and ears to the Good News God wants to share with them for their marriage.