Trending Now
You are at:Home»Featured»Muslim Persecution of Christians: July 2011
By Raymond Ibrahim on August 16, 2011 Featured, Those in Need 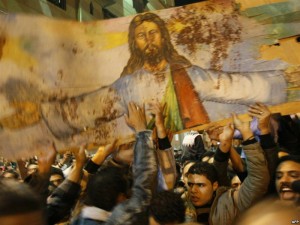 The purpose of this series is two-fold:

1) Intrinsically, to document that which the MSM does not: Muslim persecution of Christians.

2) Instrumentally, to show that such persecution is not “random,” but systematic and interrelated—that it is ultimately rooted in Sharia.

As will become evident, whatever the anecdote of persecution, it typically fits under a specific theme, including hatred for churches and other Christian symbols; sexual abuse of Christian women and misogyny; apostasy and blasphemy laws; theft and plunder in lieu of jizya; and over all expectations for Christians to behave like cowed dhimmis.

Because these accounts of persecution span different ethnicities, languages, and locales—from Morocco in the west, to India in the east—it will also become clear that one thing alone binds them: Islam—whether the strict application of Sharia, or the supremacist culture borne of it.

The vilest anecdote to surface in July comes from Pakistan, a hotbed of anti-Christian sentiment, even though Christians make up less than 2% of the population: a 2-year-old Christian girl was savagely raped when her father refused to convert to Islam. Because her anatomy has been disfigured, she has undergone five surgeries and suffers several permanent complications; her family lives in fear and hiding. Though this anecdote surfaced days ago, it occurred four years ago—a reminder that some of the most savage instances of persecution never see the day of light; and a reminder that, no matter how late they surface, they shall be duly noted and remembered.

Categorized by theme, the rest of July’s batch of Muslim persecution of Christians includes (but is not limited to) the following: