Trending Now
You are at:Home»Featured»World Youth Day Exhibition Highlights Christian Persecution
By ACN-USA News on August 16, 2011 Featured, Those in Need 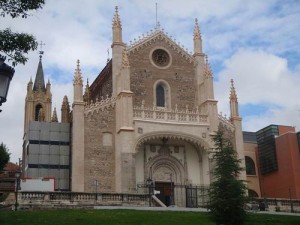 The persecution of Christians is being highlighted by an exhibition which has been organized as part of World Youth Day (WYD) 2011’s cultural program.

The photographic and multimedia exhibition, “Persecuted Christians Today,” takes place in the Royal Church of Saint Jerome in Madrid from the 15th – 21st August, but a special preview was held on Friday, August 12th.

The exhibition has been organized by the international Catholic charity Aid to the Church in Need (ACN).

Javier Fariñas, Head of Communications for ACN-Spain, said, “Many people are surprised to find that freely living one’s faith is still an offence in many countries.”

“We are challenged by the incredible testimony of people who continue living in their country, in their home, despite hostility, violence, discrimination, ridicule or mockery – despite everything they have to endure – because of their Christian faith.”

“What would I do if I lived under the same conditions as them?”

The ACN exhibition tells the story of 15 martyrs from the last 50 years and describes three examples of persecution which have attracted attention in the wider media.

The featured anti-Christian attacks took place in Gojra in Pakistan, in India’s Orissa State and in Tibhirine in Algeria.

Visitors are also encouraged to pray for persecuted Christians.

ACN’s Amparo Llobet, who organized the exhibition, said, “Prayer is one of our pillars, we want to transmit to the young people the necessity of interceding for the rest of the Church.”

She added, “What we want is to enter into dialogue with the young people so that they know us and that they know what Aid to the Church in Need is and the various ways they can help the Church throughout the world.”

“We want to sensitize them, to awake their conscience and help them engage with the issues of religious liberty and the persecution of the Church.”

On the 16th and 17th of August, there will be special events with individuals talking about their personal experience of the situation of Christians in Iraq, Cuba and Sudan.

Among those speaking will be 37-year-old Fr. Jorge Naranjo from Madrid, who has worked in Port Sudan, Khartoum and Omdurman in Sudan.

Fr. Naranjo said, “To be Christian is to have disadvantages – it is difficult to get work, to obtain a grant… It is practically impossible to obtain a license to build a Church, even if the Christians are numerous in the region.”

But, the priest said that persecution can lead Christians “to discover that the faith is a true treasure which gives all its direction to the existence and which the largest joy is to be able to divide it…”

“That which perseveres in the faith in spite of the difficulties looks further into it and builds its identity with a more solid base.”

The exhibition “Persecuted Christians Today” is being held at the Church of Saint Jerome (San Jerónimo el Real, Calle Moreto, 4, 28014 Madrid) from the 15th to the 21st of August. It will be open from 10am to 9pm.