Trending Now
You are at:Home»Featured»Three Wrong Reasons to Become a Religious
By Kevin Banet on February 6, 2012 Featured, MyChurchParish.com, Vocations 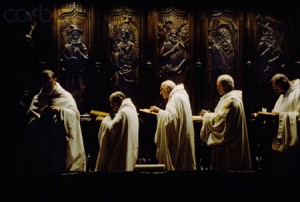 You may think you have a religious vocation, but do you?

A recent post on a Catholic social media website warned of three faulty motivations of those who were attracted to religious life. The post said that the candidate might see religious life as 1) a refuge from a hostile world, 2) an attraction to something external, as pleasant singing, or 3) as an escape from someone, as from parents.

These motivations have, says bishop and doctor of the Church, St. Francis de Sales, “no value for entering the house of God.”

One reader on the website who responded to this post explained why these three appealing notions seem at first to be correct. The reader wrote,

What then, is the answer?

Saint Francis de Sales, co-founder along with St. Jane Frances de Chantal of the Sisters of the Visitation of Holy Mary, illustrates the best motivations for entering religious life. He says they include union with God, growth in virtue, and the strengthening of our will to follow Jesus.

Here are the qualities he talks about:

This and other excellent material can be found in the Spiritual Conferences of St. Francis de Sales, Conference XX, “Why We Should Become Religious.”

The spirituality of the Sisters of the Visitation of Holy Mary grew from the communication — nearly all from letters — between St. Francis and St. Jane. These letters fill several volumes.