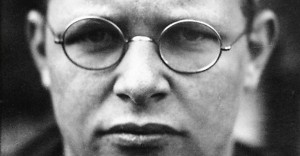 Much has been said lately about how to do evangelization. I’ve contributed a bit to that myself. Now I begin to think that, instead of always stressing niceness, it might be good to give tough religion a try.

That idea was inspired by a reading of Eric Metaxas’s biography of Dietrich Bonhoeffer, the Lutheran theologian and pastor executed by the Nazis near the end of World War II for  involvement in the plot against Hitler. Metaxas’s book, Bonhoeffer: Pastor, Martyr, Prophet, Spy (Thomas Nelson), is a tad too worshipful for my taste, but it contains a wealth of information about this iconic religious figure of the 20th century and, best of all, quotes generously from his writing.

As in this description of what he found while doing post-doctoral studies in the early 1930s at Union Theological Seminary in New York: “In New York they preach about virtually everything, only one thing is not addressed, or is addressed so rarely that I have as yet been unable to hear it, namely, the gospel of Jesus Christ, the cross, sin and forgiveness, death and life.”

As that suggests, Bonhoeffer, an intellectual from a well-off, highly cultured family, was no wimp. Welcomed back to New York in 1939 before the outbreak of hostilities, he could have spent the war there safe and secure. But he chose to return to Germany in the conviction that he belonged with his people during what he knew would be their darkest hour. For the Nazis to have killed him with the end of the fighting in sight was an act of malevolence serving no purpose but revenge.

The circumstances of his death aside, Bonhoeffer may be best remembered now for his scathing comments on “cheap grace.” That was the name he gave to the delusory self-justification many Christians bestow upon themselves with little support for it.

His view of abortion also deserves recalling today. In his Ethics, Bonhoeffer makes the point that quibbling about the personhood of the unborn is an evasion of the real issue: “The simple fact is that God certainly intended to create a human being and that this nascent human being has been deliberately deprived of his life. And that is nothing but murder.”

As might be expected, Bonhoeffer’s thoughts on evangelization are consistent with his thinking on most other things. In a paper written in 1937 he said in part: “The proclamation of grace has its limits. Grace may not be proclaimed to anyone who does not recognize or distinguish or desire it… The world upon whom grace is thrust as a bargain will grow tired of it, and it will not only trample upon the Holy, but also will tear apart those who force it on them.”

Well-intentioned people, Catholics included, sometimes argue that for the sake of evangelization the churches should water down the gospel: a little trimming here, a little prudent silence there, and behold–those pew-sitters who disappeared years ago will come flocking back.

Maybe, but I doubt it. And even if true, how useful would this way of getting people back to church be? “The world upon whom grace is thrust as a bargain will soon grow tired of it.”

I’m reminded of something that somebody else, not Bonhoeffer, said: “If any one will not receive you or listen to your words, shake off the dust from your feet as you leave that house or town” (Mt 10.14). It might even be a good way to get their attention–which is how evangelization begins.