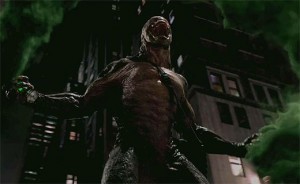 The other day my family made me sit down and watch the new Spider-Man movie, The Amazing Spider-Man. I don’t know why they had to make yet another Spider-Man flick, but for the sake of family unity I cuddled up on the coach and watched.

Recently, I hit a bunch of unsuspecting Catholic women at an innocuous book club over the head with the reality that transhumanist ideas are everywhere and that our children are soaking them up like a sponge. “The Amazing Spider-Man” was full of them.

I appreciated that the depiction of transhumanism, called “cross-species genetics” in the movie was a negative one. Dr. Connors, in a desperate attempt to keep his job and regrow his lost arm, injects himself with what I assume is a concoction of reptile DNA. In a total suspension of disbelief, Dr. Connors gets his arm back and then some when he turns into something horrific, the vile character of the Lizard that is whole, strong and, in the Lizard’s opinion, superior to all humanity.

But Dr. Connors doesn’t stop there. He wants the whole human race to share in his new found genetic superiority. He now understands that humans are weak and pathetic and it isn’t good enough to fix us. He needs to change us and it is for our own good. In a monologue in the depths of the sewer, Dr. Connors muses, “This is no longer about curing ills. This is about finding perfection.” (At which point my 10 year-old son whispers to me, “Don’t say a word, Mom. Don’t say a word.”)  Dr. Connors, of course, attempts to bring all of New York City into his genetic nirvana.

I was heartened that Dr. Connors was such a tragic figure as super-heroes and villains with super powers have traditionally been. So why does the depiction of a lizard-man in a silly remake of a silly comic matter? Because I hear Dr. Connor’s monologue everywhere coming from normal everyday people. People like this commenter at the transhumanist site Singularity Hub who tells us how he or she really feels about being human:

“Who doesn’t want to be smarter, prettier, healthier? Who doesn’t want to have wings to fly through the air, or gills to breathe under water? Are we stuck just being land dwellers? We spend most of our lives OBTAINING and MAINTAINING health, beauty, intelligence, etc., when we could be spending all this time and money obtaining and maintaining loving relationships with other people (transhumanists!) and going on adventures out to space exploring the universe, rather than stuck at home watching crap movies from Hollywood, going to school half our lives and drowning in debt because of it, and then just paying bills and taxes till you die. That’s no life, that’s SLAVERY.

Transhumanism is the answer to the racism, sickness, death, ugliness and stupidity. Transhumanism is the ultimate solution to be able to live up to our fullest godlike potential. The creative potential is limitless! I can’t wait to experience more, not being trapped inside these biologically frail, disease-prone bodies!

The screenwriters from “The Amazing Spider Man” could have put these exact words in the mouth of Dr. Connors. Take note that this person qualifies who “people” are: other transhumanists. Join them or be inferior, considered less than a person.

Do your children a favor: use these super-hero movies as a way to talk about what it means to be human, how God loves us just the way we are, and going beyond curing disease and disability to changing our God-given nature is a disaster waiting to happen. My 10 year-old son can spot a transhumanist story line from a mile away. Can yours?