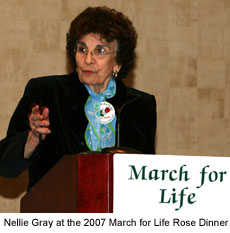 One of the leading lights of the pro-life movement in the United States has gone out. Nellie Gray, the charismatic octogenarian founder of the annual March for Life in Washington, D.C., the largest annual pro-life event in the country, passed away over the weekend, and was discovered in her apartment yesterday.

Gray, who was once described by Cardinal Sean O’Malley as the “Joan of Arc” of the pro-life movement, was an ubiquitous figure at the pro-life march every year, her slight frame standing at the podium at stage centre, introducing the many luminaries who addressed the crowd of several hundred thousand during the rally before the march.

Gray founded the march in 1974, and guided its development into a massive annual movement that has inspired copycat events not only in cities across the U.S., but around the world, striking fear into the heart of pro-abortion activists in the process. In 2010, outgoing NARAL President Nancy Keenan recalled her dismay at stumbling on the March for Life after coming out of Union Station. “I just thought, my gosh, they are so young,” Keenan said. “There are so many of them, and they are so young.”

“Every year since 1974, Nellie Gray has mobilized a diverse and energetic army for life,” said Father Pavone, who credited his experience attending the march as a teenager with confirming his decision to become a priest and devote his life to the pro-life cause. “Her own commitment to the cause never wavered. She was a tireless warrior for the unborn and her motto was ‘no exceptions.’ “

Though Nellie had begun to show the effects of her nearly 90 years at recent marches, she never failed to show up and to lead the proceedings. In 2008, the then-84-year-old pro-life leader was taken to hospital after tripping and falling while on stage at the March. Gray sustained bruises and cuts and required stitches to her forehead, and was unable to attend the Rose Dinner at which she has always been the MC.

But in an interview with LifeSiteNews, Fr. Frank Pavone remembered that, to his astonishment, Gray was present the following morning at a meeting of pro-life leaders, with her head all bandaged up. “It was just symbolic of her entire life. Her commitment to this cause was unstoppable,” Pavone said. “Seeing her standing up in that meeting with that patch on her head just said it all.”

Jim Hughes, vice president of International Right to Life and president of Canada’s Campaign Life Coalition, who is a regular attendee at the U.S. March for Life and a longtime friend of Nellie’s, described her as “a dynamite personality.”

“She served as a great example to all of us of how to get the pro-life message out to people,” Hughes told LifeSiteNews.com. “She was a woman that was so determined that every little baby that died was on her watch, and she wanted to work as hard as she possibly could and with as much ingenuity to change the situation.”

“She has left a tremendous legacy and she will be greatly missed,” he said.

Bryan Kemper, founder of Stand True Ministry and director of Youth Outreach for Priests for Life, said: “My heart is broken by the loss of Nellie Gray, a true pro-life hero and role model. At the same time I celebrate that Nellie is with our Lord who she loved so dearly. I have had the honor of working with Nellie for years and every time I March in DC in January, I know she will be watching over us and praying for us. Nellie Gray, I will miss you dearly. 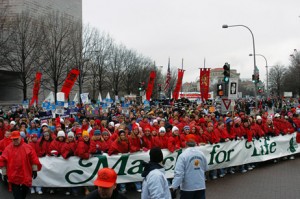 “It was an anniversary that broke Nellie Gray’s heart every year, and every day,” Father Pavone noted. “In January we will march in her memory, in her honor, to save the unborn children to whom she dedicated her life.”

Pavone recalled that Nellie was in many respects an unwitting founder of an event that was destined to transform the pro-life movement by drawing hundreds of thousands of enthusiastic pro-life advocates to Capitol Hill every year.

“She never expected or planned to start a March for Life. She would often tell me with a humorous recollection, ‘You know father, they just wanted to have a meeting, and some of us came together, and we decided to use my house for the meeting, and we thought we would have one march and that would be it. And before you know it, I was in charge of this March. And it’s not something that I wanted or anticipated, but we came together, we did it, and before we know it we had to do it a second time and one thing led to another.”

In a profile of Gray published in 2010, Catholic News Service reported that Nellie served as a corporal in the Women’s Army Corps during World War II.

“She later earned a bachelor’s degree in business and a master’s in economics,” reported CNS. “She was an employee of the federal government for 28 years, working for the State Department and the Department of Labor, while attending Georgetown University Law School. Gray found herself practicing law before the U.S. Supreme Court.”

After the Roe v. Wade decision was handed down, Nellie said there was a “tugging at her heartstrings” to do something about the decision, which ultimately led her to retire from law and devote herself to the pro-life cause – which eventually led to her role in founding the March.

“Following the march, we had about $400 left over and we were trying to decide where we should donate it,” Gray told CNS. “One Knight [of Columbus]said we need another march next year, so it went in the coffers.”

“Today marks a bittersweet moment for the pro-life movement,” said Students for Life of America President, Kristan Hawkins, upon hearing of Nellie’s passing. “A great warrior for the preborn, Nellie Grey, has left this earth and entered her eternal reward. Pro-life students from across the nation will be forever grateful for the leadership that Nellie Grey has provided to our movement, for founding the March for Life, and setting an example of passion and perseverance that inspires us all to dedicate our lives to finishing what she started, abolishing abortion in our lifetime.”

Janet Morana, executive director of Priests for Life and co-founder of Silent No More, said, “We are so grateful that Nellie Gray shared our vision of Silent No More, and recognized that the women who have had abortions speak with unquestioned authority about the ways they have been harmed by this choice.”

Every year since its founding in 2003, Nellie invited the women of the Silent No More Awareness Campaign to stand on the rally stage holding signs that said, “I Regret My Abortion,” and she arranged for a larger group of post-abortive men and women from Silent No More to be in the vanguard of the March.

“Every year more women and men come to march and to share their testimony,” said Morana. “Nellie Gray helped make that possible for us.”