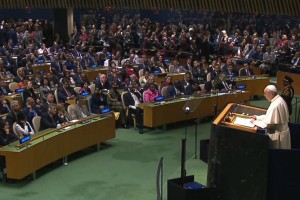 Abortion and contraception must be widely available to prevent a climate change Armageddon according to some scientists. But these views are not gaining traction at UN headquarters, and were rejected in Laudato Si, Pope Francis’ much-publicized encyclical on “care for our common home,” in which he endorsed the theory of anthropogenic global warming.

Population control is not on the agenda for a global UN climate conference in Paris this December and the UN population division’s recent work undermines any arguments to change this.

While some scientists are grateful for Pope Francis’ overall endorsement of climate change theory, others don’t want him to have the “final word” on how it should be addressed.

That’s how an editorial in the latest issue of the scientific journal Nature Climate Change puts it, before introducing a series of critical articles on the encyclical, including one by celebrity environmental alarmist Paul Ehrlich, chiding Pope Francis for upholding the Church’s teaching against abortion and contraception in Laudato Si.

Ehrlich told the Guardian that Pope Francis’s exclusion of population control from his approach to the environment was “raving nonsense,” and that he was “dead wrong.”

In the encyclical Pope Francis denounces international organizations that condition aid on implementing “reproductive health policies.” “[B]laming demographic growth” instead of consumption and production patterns is a way of “not confronting the real problems” facing the poor, he wrote.

Ehrlich retorts that solutions to poverty cannot be found without also looking at “re-production.”

“Pope Francis needs to heed his own comments on the church’s ‘obsession’ with contraception and abortion, and assume a leadership position in support of women’s rights and family planning,” he writes, warning, in his well-known style, of impending famines and apocalyptic catastrophes due to population growth.

Ehrlich admitted in an interview with the New York Times earlier this year that similar dire predictions he made in the 1960s failed to materialize. He used hyperbole to provoke “people to get something done.”

“The idea that every woman should have as many babies as she wants is to me exactly the same kind of idea as everybody ought to be permitted to throw as much of their garbage into their neighbor’s backyard as they want,” Ehrlich said.

Ehrlich’s views on climate change are flatly contradicted by the UN population division’s latest work on population and the environment.

Their analysis shows that abortion and contraception will have little impact on carbon emissions compared to changes in production and consumption, and sound environmental policy.

At a briefing earlier this year explaining these findings, John Wilmoth, who heads the UN population division, chided the climate change movement for being too alarmist.

The uncertainty about future carbon emissions is due to consumption patterns and human behavior that vary much more than fertility patterns, Wilmoth told delegates. Recent reports from the UN population division illustrate this same unpredictability can be seen between countries in recent decades.

The Catholic Church has been a global leader in denouncing inhuman and degrading ideologies behind population control. Some may say the UN is finally catching up.