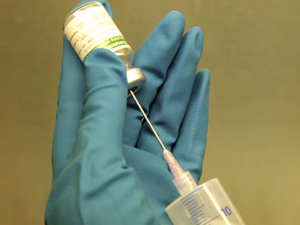 The UN is about to ask governments to fund the vaccination of every girl in the world against the sexually transmitted disease HPV, human papillomavirus. The controversial campaign could cost as much as $300 per person, totaling billions.

Dignitaries who launched the campaign at the UN in mid-April included a prominent African first lady, leaders from the UN Population Fund (UNFPA), the American Cancer Society, and the contraceptives manufacturer PATH.

UNFPA and PATH want donor nations to buy the vaccine at $14 per shot. Three shots are required over a period of six months, totaling $42, and the treatment is only good for five years. Seven treatments would be required to cover each woman’s reproductive lifetime.

Advocates warned the assembly that the idea would be contentious. Casting the campaign as an effort to eradicate cervical cancer rather than a massive vaccination program against a sexually transmitted disease will help steer clear of political resistance, they said.

One advocate advised the dignitaries that when they are asked why children should be vaccinated against a sexually transmitted disease, the UN should use the precedent of infant vaccinations against Hepatitis B.

While none of the UN speakers addressed the issue, cervical cancer is caused by HPV infection, which is spread through sexual contact.  The panel lamented a dramatic increase in the cancer in the developing world, but were less clear on the reasons for its rise, sidestepping issues of sexual behavior and focusing instead on gaining political will to fund the vaccination program.

Of the half million new cases of cervical cancer each year, more than half of the patients die, usually because they did not know they had the disease until it had reached advanced stages.

UNFPA deputy executive director Purnima Mane said UNFPA would spearhead the campaign.  If approved by UN member states, UNFPA stands to receive a significant boost in funding, given the fact that there are billions of women and girls who would require the $42 treatment every five years.

The funding would reverse a decline in donations for international population programs, which have fallen from a high in 2008 due to the global economic downturn and plummeting global fertility rates. The Obama administration had to marginally cut UNFPA funding for 2011 during budget battles with U.S. lawmakers, but promised to increase it to $50 million in 2012. PATH likewise received $50 million, about a fifth of its funding, from the U.S. government in 2009.

Critics are concerned that the vaccination scheme will subsume the fight against cancer into the already well-funded reproductive rights agenda at the UN. They warn that because UNFPA aggressively promotes “sexual rights” for minors, the effort will not address sexual behavior or parental rights regarding medical decisions and could lead to an increase of the disease rather than its cure.

UN member states will deliberate the issue September 19th and 20th at the UN High Level Meeting on Non-communicable Diseases.