Trending Now
You are at:Home»Featured»War on the Meaning of Christmas
By Rebecca Taylor on December 19, 2012 Featured, Live in Christ 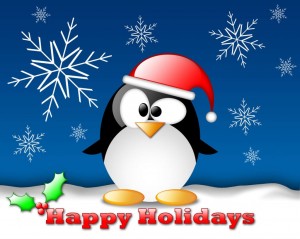 What does this penguin have to do with the birth of Christ?

I recently saw a Jon Stewart monologue that really got me thinking. Stewart was making fun of Fox News’ “War on Christmas.” Stewart asks how could there possibly be a “War on Christmas” when Christmas, as a holiday, has become so bloated that this year it finally took over Thanksgiving. In 2012, before the turkey was even cold, Americans flocked to the stores to buy Christmas gifts on the new consumer holiday called Black Thursday.

What other holiday gets so much media? My cable guide is filled with endless Christmas specials of my favorite shows. Christmas music gets its own radio stations dedicated to such crimes as “Dominick the Italian Christmas Donkey” (I am Italian, by the way) and Justin Bieber’s version of “The Little Drummer Boy.” And we are subjected to some of the worst music ever made not just for a week or two, but for a whole month or more. (I feel so sorry for the people who have to work places that pipe in that garbage. I think they should strike.)

Stewart ends by telling Halloween to watch its back. A wise admonition since we all have seen Christmas decorations on display right next to Halloween costumes and candy.

Upon some serious reflection, I discovered I agreed with Stewart. There is no “War on Christmas,” the increasingly secular holiday. How could there be when Christmas has expanded its waistline so dramatically that it has finally eaten Thanksgiving?

I realized that instead there is a “War on the Meaning of Christmas.” We have all heard the stories of the “Holiday Pageants” where kids are only allowed to sing “White Christmas” and “Rocking Around the Christmas Tree.” No “Silent Night” or “God Rest Ye Merry Gentleman” allowed. Or municipalities that will not allow a nativity on public grounds. And yet all around are twinkling lights, bad music and the “Lowest Prices of the Year!” For the majority it seems, Christmas is a secular holiday devoid of its true meaning: the celebration of the birth of our Lord and Savior Jesus Christ. 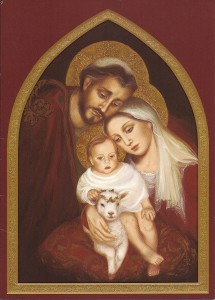 I believe the “War on the Meaning of Christmas” and the Christmas season’s urban-sprawl-like expansion are linked. I see it like I do ice cream. It only takes a few bites of full-fat, full-sugar ice cream to satisfy. It’s the real deal. But take the nearly fat-free, sugar-free stuff and it may take the whole carton to reach the same level of satisfaction. And you are left with a bad after-taste.

The more the true meaning of Christmas is forgotten, the more gigantic the holiday has to become to satisfy. The secular Christmas also leaves that bad after-taste of gluttonous consumerism.

My family calls me the “ba-hum-bug.” I will not allow Thanksgiving weekend to be interrupted by sales and Christmas decorations. We deck the halls only after the first Sunday of Advent. I do not play any Christmas music in my car until a week or so before Christmas and even then it has to be good, sacred Christmas music. (Sorry Biebs, but you just don’t cut it.)

And for all my attempts to try and keep the “full-fat, full sugar” version of Christmas, I am seen as the Christmas downer. So be it. Because when Christmas Eve arrives, I am ready to celebrate. Ready to sing carols with abandon. Ready to be merry with family and friends. Ready to experience the joy and wonder of the birth of Christ. All without that nasty after-taste.

The “War on the Meaning of Christmas” continues. It will no doubt escalate along with the trampling of our religious rights. As more of the true meaning of Christmas is lost, I expect the secular Christmas to become like “The Blob” devouring everything in its path. All I can say is, “Watch out Halloween. You are next!”