Trending Now
You are at:Home»Arts, Leisure & Culture»On Books»We Make the Future, Not the Other Way Around
By Archbishop Charles Chaput on May 10, 2011 On Books, The Shepherd's Voice 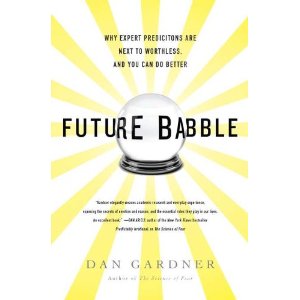 “How bad are expert predictions? Almost predictably bad.  In 2005, Philip Tetlock, a professor of psychology at the University of Pennsylvania, published the results of a magisterial 20-year analysis of 27,450 judgments about the future from 284 experts.  He discovered that the experts, in aggregate, did little better, and sometimes considerably worse, than ‘a dart-throwing chimpanzee’.”  —Trevor Butterworth,  The Wall Street Journal

If Dan Gardner’s new book, Future Babble: Why Expert Predictions Are Next to Worthless, and You Can Do Better  (Dutton) is half as good as Trevor Butterworth says it is, buy it and read it right now.  I will.

Butterworth’s review of Future Babble in the April 30 Wall Street Journal is a gem in its own right: funny, insightful and unsettling all at the same time.  As author Gardner and reviewer Butterworth both point out, human beings are “addicts for certainty.” This makes us easy victims of plausible-sounding nonsense.

We live more and more in a cocoon of knowledge-class opinion and prediction which is often wildly wrong.  As Butterworth notes, “the high priest of erroneous prediction is, of course, Paul Ehrlich,” whose books “The Population Bomb” and “The End of Affluence” have been tossed in history’s dustbin by actual events.

But Ehrlich is just one in a very long list of impeccably credentialed experts who got things drastically wrong—who warned of 21st century race war in America; the collapse of Britain; the irrelevance of China; Japanese global dominance; extreme and chronic inflation; and the Soviet Union (when there was still such a thing) surpassing the West in economic production.

Given the track record, why do people still listen so gullibly to “experts”? As Butterworth notes, the key to an expert’s “success in the face of repeated failure (is) never admit mistakes, never sound doubtful … the more you sound like you know what you are talking about, the more people will believe you.”

In practice, gullibility has very little to do with education.  Future Babble recounts the story of one “renowned” Dr. Myron Fox, an expert in “mathematical game theory as applied to physician education” who wowed three different audiences of academics and graduate students with his confidence and clarity.

Alas, Fox was an actor in an experiment by University of Southern California psychologists.  And his presentations were nothing more than rational-sounding mumbo-jumbo.

How does any of this relate to our lives as Christians?

It’s worth remembering that “experts” saw Jesus as a delusional wilderness prophet.  Experts dismissed the idea of the resurrection.  Experts laughed at Paul in the Areopagus.  Experts put their money on the Sultan’s fleet at Lepanto.  Experts predicted the death of Christianity during the Enlightenment. The list goes on and on.

Most tellingly, most of Europe’s political and economic experts 80 years ago shrugged off Islam as a stagnant, fossilized thing of the past. It was the Catholic writer Hilaire Belloc who saw the flaws in our own civilization and the coming resurgence of Islam more clearly than any of his secular contemporaries.

The tools of social science that undergird so much of modern expert opinion have great descriptive value.  But the key word in that sentence is descriptive, not “predictive.”

History is made by people, not things or trends or the opinion of our knowledge classes, because history consists of individual decisions and actions that flow from human free will, not statistics.

As Scripture cautions us again and again:  We cannot be sure of our lives even tomorrow.  And to the degree God grants us the gift of tomorrow, its content depends on our choices and actions today.

The lesson of the Easter season is that we are redeemed by the love of God — a love unearned but passionate and real — and made free to co-create with him a future of mercy and justice for the people whom our lives touch.  We make the future, not the other way around.  It’s a principle worth recalling the next time we listen to experts.

The Lord is risen!  Alleluia!  Once again, happy Easter!