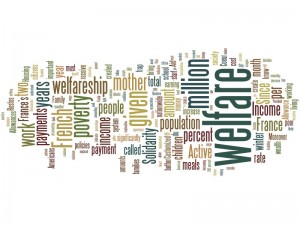 Welfare has become a characteristic of President Obama’s domestic policies. There has been a surge in American citizens on welfare over the last four years, including a 50-percent increase in people on food stamps (from 32 to 47 million). It is a form of “welfareship.”

As a citizen of France, I know such a society very well. France has 60 years of experience with entrenched welfare policies, beholden to a kind of welfareship. It is a democratic society based heavily on welfare, and distrusting the values of free markets.

In 2009, 11.2 million French persons received welfare payments, out a total population of 65.3 million. This amounted to $78 billion in payments. Moreover, these 11 million beneficiaries have families (parents, spouses, children); thus, more than 35 million people are actually benefiting directly or indirectly from welfare payments, which is more than 50 percent of the French population. If this rate were applied to America, about 157 million Americans would be relying on welfare.

Owing to the amount of money poured into welfare, should it be expected that there is a “social return on investment” and that the living conditions of French citizens are improving? In other words, does this welfareship work?

First, the poverty rate: In 1990, 13.8 percent of the French population was poor; in 2009, the percentage was almost unchanged at 13.5 percent. In 20 years, poverty did not significantly decrease, despite all the welfare payments.

Second, the “Active Solidarity Income,” which symbolizes France’s welfare system: It has replaced a previous payment called the “Minimum Income for Insertion.” These two are the same thing; only the name has changed. The latter was implemented in 1989, when 370,000 people benefited. In 2009, this “income” was given to 1,697,357 people. That is a huge increase. Failure must be acknowledged.

In practice, France’s welfare system is a failure, and there is an economic explanation for this. Welfareship does not create wealth; there are no incentives to create wealth. Despite its good intentions, welfareship has created a “poverty trap.” Consider:

Let’s take an unemployed mother living alone with two children between six and 10 years old. In 2010, there were 284,445 French families in this situation that were on welfare.

This mother will be given the “Active Solidarity Income.” Since she has two children, the amount will be $1,100. If she is renting an apartment for $650, she will be given the “Housing Customized Aid,” amounting to $620. Then she will receive “Family Allowances,” which amounts to another $160. Finally, let’s add the payment known as “Allowance for the start of the school year,” which is $750 once a year, or $62.50 per month. (She might even benefit from other aids, but these are the most common.) She will be given a total of $1,942.50 per month.

Now imagine that this mother has found work and will be paid the “legal minimum wage,” which amounts to $1,820 gross—or $1,430 after taxes. Since she would be earning $1,430, she will no longer receive the “Active Solidarity income.” Her “Housing Customized Aid” will be lowered to $460, but she will still be given “Family Allowances” and the “Allowance for the start of the school year.” Therefore, her total income will amount to $2,112.50. She will then belong to the 50 percent of French workers earning $1,960 per month.

For this mother of two, working again will bring her family an additional income of only $170. Moreover, this $170 is likely to be lost in the cost of transportation to work, since the cost of gas in France is $7 per gallon. In any case, such a small amount of money is not an incentive to go back to work. Between staying home and working, the choice is simple: welfare is a better deal.

This mother, like many in France, has fallen into the “poverty trap.” Since work cannot significantly bring a real improvement in daily life, it is better to stay “poor” and do nothing, which is not rewarding. Assistantship becomes more important than entrepreneurship.

Americans need to understand these lessons from across the Atlantic. They must know that welfareship is not optimal. The more welfare, the less well-being.