Trending Now
You are at:Home»Columnists»Western Civ in the Crosshairs
By Dr. Paul Kengor on April 29, 2016 Columnists, Featured, Government & Politics, The Social Order 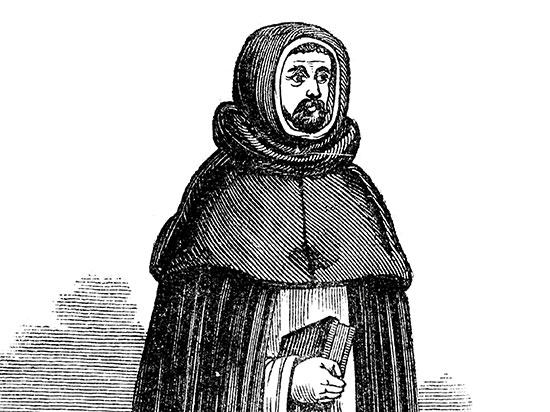 And A Glimmer of Hope

Students at Indiana University-Bloomington recently went into panic mode at the sight of a Dominican friar, who they mistook for a Ku Klux Klan member. Funny? Yes, but also sad. It is a further sign of the state of our universities, and what is and isn’t being taught.

For starters, let’s get this on the blackboard: For a really long time, there have been religious guys in robes, flatly unmistakable in their appearance. This year, 2016 A.D. (Anno Domini, Latin for “In the Year of Our Lord”), just happens to mark the 800th anniversary of the Dominicans. The Dominicans, named for their founder, Dominic de Guzman, a Spanish priest and contemporary of another giant of the faith, Francis of Assisi, founder of the Franciscans, long pre-date the KKK. These orders preceded Luther’s Reformation by three centuries, and themselves were a vital reform in rekindling and sustaining the faith against some significant heresy.

(A related funny-but-sad story on the Franciscans: A Franciscan friar told me about an encounter he had on the New York subway. A young woman looked at him in his garb and smiled and said: “Okay, I get it—you’re a Jedi Knight, right?”)

The Dominicans far pre-date the American university. Not unrelated, our universities once taught what we commonly call “Western Civ,” or “Western Civilization,” where students learned the elemental facts of their Western world, and where contemporary campus oddities like religious figures were not alien to their mind’s eye. But such is not the zeitgeist of the modern university, where today’s typical student is enmeshed with a thoroughly secular worldview where a trinity of race, gender, and sexual orientation account for what is held sacred. They are carefully trained to be ever-vigilant for the slightest whiff of racism, sexism, and “homophobia” or (the latest rage) “transphobia.” Their “education” is such that an ancient religious order is utterly unrecognizable.

That brings me back to what happened at Indiana University-Bloomington.

The mysterious robed intruder shuffled his way on to campus in the dark of night. “iu students be careful,” Tweeted one vigilant student, “there’s someone walking around in kkk gear with a whip.”

The “kkk gear” was the friar’s robe. The “whip” was presumably either his belt or his rosary, the latter an 800-year practice likewise started by Dominic.

Residential hall advisor Ethan Gill zapped an email to his peers, warning them of the ominous “threat” marching across the quad: “There has been a person reported walking around campus in a KKK outfit holding a whip…. Please PLEASE PLEASE be careful out there tonight.” Later in the evening, a relieved Gill retracted his warning, but not before recounting the sense of horror unleashed by the unsuspecting friar: “Then my residents, terrified, come running to me, saying yeah the report must be true, they saw him and couldn’t believe there was a klansmember with a whip,” he explained. “And I see this picture. It’s a priest. With a rosary.”

In short, it’s no surprise that today’s college students would be dumbstruck at the image of a religious figure in a robe. Such is completely symptomatic of the life and learning of the cultural asylum we call the modern American university, where—in the name of secular liberalism, multiculturalism, diversity, and “tolerance”—a relentless battle has been waged upon Western civilization for decades. In fact, consider this irony: fittingly, mere days after this incident in Bloomington, students at Stanford University resoundingly rejected—by a margin of six to one—an effort to add a required course on Western Civ to the curriculum. The campus secularists can breathe a sigh of relief knowing that a dangerous Western Civ requirement will not cut into enrollment for courses like “Narrating Queer Drama” at Stanford’s department of Feminist, Gender, and Sexuality Studies.

And here’s the height of the irony: If students at Stanford, and at Indiana University-Bloomington and elsewhere, would dare explore Western civilization, they might discover that their entire educational tradition owes quite a debt to these arcane men with robes and beads. The reality is that it was the monks, starting with the Benedictines (founded in the 5th century), that preserved crucial ancient texts and were the educators who established the model and laid the foundation for the universities. We arguably would not have the modern university without monks, certainly not how and when we did. The founder of the Benedictines was Benedict of Nursia (480-547 A.D.). He arrived in the world only a century after the birth of Augustine (354-430 A.D.) and the Council of Nicaea (325 A.D.), which, among other things, affirmed the literal belief in the Trinity (no small thing).

Picking up with the Dominicans and their influence: Dominic died in 1221, only to be followed by Thomas Aquinas (1225-74) and the Scholastics. Aquinas himself was a Dominican. Also seizing the torch at the time were the likes of Bonaventure (1221-74) and the great writer Dante (1265-1321). They all not only fought the heresies of their day, from Gnosticism to Albigensianism, but they were the teachers of their day, holding forth in historic universities from Oxford to Paris.

Secularists need not approve of these things, but they ought not be embarrassingly (and even deliberately) ignorant of them.

Needless to say, college students will not learn any of this in their courses on “Transgender Studies” or “Gay Autobiography.” The progressive professors running these courses are championing the thoughts of Harry Hay (the Marxist gay-rights pioneer) rather than Francesco Bernardone. And I assure you that to the legion of contemporary American progressives, “progress” is indeed a vigilant sophomore more attuned to suspecting a klansman than recognizing a friar.

In the ashes of the Judeo-Christian values and timeless absolutes they have set ablaze, our modern progressives in the academy have instead fashioned a molten calf of politically and culturally correct nostrums. They peddle false faiths full of contradiction and selective application, such as their “tolerance” and “diversity” heresies—carefully applied only to things they want to tolerate. It is tolerance and diversity for me but not for thee. They denounce the “bigots” who oppose transgender bathrooms while they resist the Christian teachings that have beautifully transformed and redeemed the lives of billions. And thus, when these late-adolescent products of contemporary academia look at a Dominican brother with confused fear, we shouldn’t be surprised. This is a direct extension of their “higher” education. This is what they and their parents have paid for at great financial and moral cost.

May I point to what has been a light in the darkness? Here at my college, Grove City College in Grove City, Pennsylvania, we not only respect Western civilization but teach it. It is the root of our five-course Humanities curriculum, which every student is required to fulfill—covering art, music, literature, history, and sacred ideas and texts—and one of the courses is even unashamedly titled, “Western Civilization.”

We are striving to maintain Western Civ, not kill it. How counter-culture is that these days? It is indeed. As our college president, Paul J. McNulty, observes, “We are the counter-culture at Grove City College.”

Yes, we are. In the 1960s, the campus “counter-culture” had decidedly different overtones than it does now, 50 years later. To be counter-culture in the 21st century means to fight to retain the best of the timeless Western Judeo-Christian values that got us here. And it certainly means knowing the difference between a priest and a klansman.