Trending Now
You are at:Home»Learn & Live the Faith»Evangelization»What do Traditionalists Want?
By William Bornhoft on January 6, 2015 Evangelization, Featured 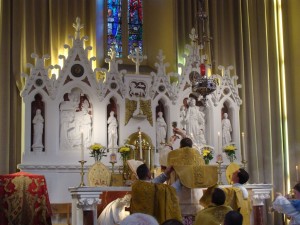 Thank you for your continued work on this dialogue. It’s been a pleasure reading the comments from Catholic Lane readers. I encourage anyone with questions or concerns about anything I’ve written here to email me. As a self-described orthodox Catholic, I guarantee that any differences I may have with traditional Catholics are small when compared to our common ground.

Per your recommendation, I would like to take this opportunity to ask you about the motives and goals of traditionalists in the Church today. I think a Q&A of sorts here will be educational for myself and others, and perhaps you will get a better understanding of the causes of my concerns.

My first question addresses what I think is the elephant in the room for any discussion about the Roman Rite; Do traditionalists believe that Tridentine Christendom and Catholicism are (or should be) nearly synonymous? Is there something about the Church’s past European traditions that are inherently superior to traditions that developed, or may develop in another time or place? A recent piece written in Crisis Magazine argues that “the New Mass didn’t give nearly so distinctively Catholic a view of things” compared to the Extraordinary Form. Is this a statement you agree with? If so, I would like to know what exactly makes the Extraordinary Form more Catholic than the Ordinary Form.

Regardless of their ultimate goal, I am concerned that, in their efforts to win this battle, traditional Catholics are creating a Catholic ghetto of sorts, in which families practice their faith in an entirely pre-Conciliar Church, unattached to the modern Church and maintaining a bunker mentality towards the modern world. The Church in the United States already has an issue with self-segregating parishioners, with social justice liberals congregating in one part of town, political conservatives in another, and fewer parishes desiring true obedience to Rome. As I’ve said before, traditional Catholics set a good example for us all by partaking in frequent confession, fasts, feasts days, and adoration. But their good example goes largely unseen by most of the Church because traditionalists, like everyone else, have their own parish.

Allow me to dive a bit further into the topic of American Catholic segmentation. In 2007, current New York Times conservative Catholic columnist Ross Douthat, then writing for The Atlantic, wrote an insightful post on this issue:

“I wish more people went to confession and fewer people went up to Communion, but I also want to attend a church where the lukewarm and the zealous can feel comfortable sitting side-by-side in the pews; I understand the impulse behind Ave Maria University and all the other redoubts of neo-orthodoxy, but I’m wary of the separatism they embody. And I hate the polarization in the Church that makes me feel like I have to choose between what the op-ed accurately describes as the listlessness of the typical suburban Mass on the one hand – thick with ‘parents sedating children with Cheerios; priests preaching refrigerator-magnet truisms; amateur guitar strumming that was lame in 1973’ – and what often seems like a strident, more-Catholic-than-the-Pope zealotry on the other.”

Douthat is harsh on everyone here, but he gets his point across. Though EF parishes may continue to grow, it’s extremely unlikely they will become a majority. The best case scenario, in my view, is that adjustments are made to the OF that satisfy traditionalists enough yet don’t undo the important work of ressourcement initiated by Vatican II. The worst case scenario is that the liturgy becomes the subject of a proxy war between the different parties battling for the meaning of the Second Vatican Council.