Trending Now
You are at:Home»Featured»What Dreams May Come: Azazel and the Pursuit of Justice
By Fr. Gordon J. MacRae on January 16, 2013 Featured, Law & Justice, Vocations 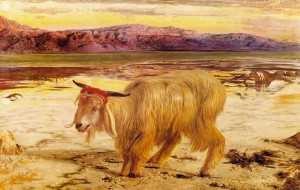 In “Nightmares and Dreamscapes from the Desert,” a These Stone Walls post during Lent last year, I wrote of a recurring dream I’ve had throughout 18 years of imprisonment. The dream had multiple variations and outcomes, all of them anxiety producing, but one version in particular seemed to be an archetype for the dream’s central plot.

You might remember its details. In the dream, I was lost at night in a city vaguely familiar, pursued by a mob hunting me through the dark city streets. I climbed the steps of a Catholic church for refuge. That particular scene came right out of my childhood, and I wrote of it in “A Glorious Mystery for When the Dark Night Rises.” In my dream, however, the church doors were locked and its sanctuary inaccessible.

Left on the stairs of the church with the pursuing mob closing in, I turned from them to face the huge bronze doors. There I saw an immense, finely detailed bas relief of the Crucified Christ cast into the bronze of the huge door. Someone in the mob let loose a stone aimed at me, but it missed me and struck the Crucifix. I awoke muttering something I’ll always remember: “The stone that was meant for me struck Thee.”

I have very vivid dreams in prison, sometimes with plots that seem to run all night long, though I know they don’t. That dream and many others very much like it have been both the cause and effect of anxiety, a problem that every prisoner seems to have in abundance. What’s central to the plot in every variation of the dream is the fact that I am a priest being pursued by a lynch mob.

A lot of people don’t know that “lynch mob” is a term that originated just after America’s Revolutionary War. In 1780, after America gained its independence from Great Britain, Colonial Army Captain William Lynch of Virginia organized his own private army. It was a band of former soldiers intent on seeking and punishing Loyalists, Colonists who remained loyal to Britain during the war. Too often, Captain Lynch’s only evidence came from anonymous informants, and with that spectral evidence he and his mob descended upon farms to summarily convict and hang their occupants. Hence the term, “Lynch mob” which used to be capitalized in the English lexicon.

My lynch mob dream is interesting because from it you can easily pinpoint some of the reality that has befallen many accused priests. With policies that left accused priests standing alone and exposed outside Church doors, the mob – aka, SNAP, VOTF, and much of the secular and Catholic press – closed in for trials without evidence and condemnations without defense. I happen to know first hand that once a priest is so condemned to wear the scarlet letter of accusation, there is great resistance in some Chancery offices to hearing any defense.

Some might think it’s risky to write of such dreams on These Stone Walls. Some think I shouldn’t let people into my psyche so openly, but there’s really not that much going on in here. Besides, I found that writing about the troublesome lynch mob dream robbed it of its power, and I haven’t had it since. Others have come to take its place, however, and I had one recently.

In this new emanation of the dream, I was brought in chains to a court hearing on our new appeal that has been ever so slowly evolving in fits and start since it was filed one year ago. In the new dream, I stood before a judge who in the end ordered all my chains removed and declared me to be free. The lawyers all congratulated each other and shook my hand in the dream, and then they got into their cars and left me standing on the courthouse steps alone. With my bonds of 18 years suddenly removed, I was free. I was also tired and hungry and I realized with anxiety in the dream that for over 18 years I had been a non-person. I had no money, no identity – at least no identity that anyone in my diocese dared acknowledge – and no place to go.

Then it was night in the dream, and I was on the city streets again. I knew I had been there many times before, but there was no mob. 1 walked to the only place 1 knew, the parish where I once served 30 years ago. A priest I once knew opened the door and declared, “I cannot help you,” then slammed the door leaving me in the cold. I went into the church through a back door found open, and I fell asleep in a pew, the Blessed Sacrament’s vigil candle burning brightly just a few feet away.

I don’t think I had ever had a dream about falling asleep before. Anyway while it was still dark, I was awakened in the pew by my brother priest who had called the police to have me charged me with trespassing. The chains removed just hours earlier were put back on me, and I was taken back to prison, full circle, to where the dream about freedom began.

The priest at the rectory door, and his “I cannot help you” comment, was also a real experience that Ryan MacDonald wrote of in an article entitled “To Azazel: Father Gordon MacRae and the Gospel of Mercy.” It wounded me deeply when it happened a few years ago. It troubled me again when I read it in Ryan’s article, and yet again when it entered my midwinter night’s bad dream. Obviously, my psyche and soul are telling me that it needs some attention.

WHAT THE JEWS KNOW OF JUSTICE

Ryan MacDonald’s use of the term, “To Azazel” in his title was very clever. It’s a mysterious term, used in Scripture on the Day of Atonement (Yom Kippur) when the high priest placed his hands on a goat upon which was imposed all the sins and transgressions of the people. This Scripture passage in the Book of Leviticus (16: 8-10; 20-28) was the origin of the term “scapegoat.” The scapegoat was then sent into the desert, “To Azazel.”

The actual meaning of “Azazel” is uncertain. It appears to be both a name and a place, or even a social standing. According to the Jewish Apocryphal book, 1 Enoch (8:1; 10: 4-6), Azazel is the name of a fallen angel, a demon of the desert. The name also denotes the region to which the scapegoat is sent bearing the sins of others. Its place in the desert is the land of the lost, a place from which the scapegoat is never allowed to return.

One of our earliest TSW subscribers is Jacob, a devoutly Jewish man from the San Francisco Bay area. Jacob writes to me on occasion, though as usual I’m very delinquent in responding. One of Jacob’s letters has always stood out. He wrote that the pursuit of justice is valued very highly in the Jewish community. He wrote that the Torah admonishes us three times that, “Justice, justice, justice shalt thou seek.”

Catholics – and I’m not excluding bishops and priests – could learn a few things about justice from our spiritual ancestors, the Jews. Late last month, a TSW reader sent me an example in a surprising December 16 blog post entitled “Father Gordon MacRae – Imprisoned for Abuse Payoff?” It was posted by psychologist and rabbinical scholar,Daas Torah on his website of the same name. The site is subtitled “Issues of Jewish Identity.” Daas Torah has authored several books on child and domestic abuse in the Jewish community and is considered an expert in this field.

After a decade of official Catholic efforts to appear sufficiently harsh and unmerciful in heavy-handed condemnation of accused priests, Catholic leaders might take a cue fromDaas Torah and the Jewish community’s grappling with these same issues. Some of the comments by Daas Torah’s readers on his post about me reveal a basic tenet of justice that somehow became lost as we addressed the burgeoning Catholic scandal a decade ago. Daas Torah’s Jewish readers are firm in their opinion that victims of real abuse are not at all served by presumptions of guilt and sabotaging the rights of the accused. Here’s an example by a commentator reacting to Daas Torah’s presentation of the case against me:

“Innocent victims who were targeted by false allegations . . . is another thing the victim community does not want to hear . . . Don’t assume that all victims consider themselves to be well-represented by the political activists. Many victims are exceptionally sensitive to injustice. This is also true in the Catholic community, where groups like SNAP want to bury cases like MacRae’s because they undermine sound-bite propaganda.”

Daas Torah’s post included a link to a 2012 update on this story. As a prisoner with no on-line access, I had only a printed version that was sent to me so I had to ask someone to go online to find out what this “update” link was. Surprisingly, it’s a link to an article by Ryan MacDonald entitled, “Judge Arthur Brennan Sentenced Father Gordon MacRae to Die in Prison.”

Fellow Catholics, take note of this. Salvation came to us from the Jews. And lest any of us wonder whether Catholics are ready to hear another side of this decade of scandal in the Catholic Church, we need look no further than The Media Report which a few weeks ago posted its year end “Top Ten Stories of 2012.” In Part 2 of that post, the Top Five, The Media Report’s most visited and cited story of 2012 was David Pierre’s coverage of my defense in “Exclusive Report: Alarming New Evidence May Exonerate Imprisoned Priest.”

Whether 2013 brings freedom remains an uphill climb, but there are signs that it may at least bring forth truth, and there is indeed a certain freedom in truth. The loud lynch mob of SNAP and VOTF have toned down their rhetoric noticeably as facts and new evidence emerged over the last year. Just as in my dream, most of them seem to have simply disappeared.

I have never issued a plea that my brother priests and bishop open the rectory doors to take up the cause of my defense. That would be a lot to ask as the lynch mob roams the streets. But there is a defense, and it is the truth, and a blatant refusal to hear it leaves justice in the realm of Azazel.

In our “Hits and Misses of 2012,” I cited Bill Donohue at The Catholic League and David Pierre at The Media Report for being undaunted witnesses to the truth. And I am very much aware of the dozens of dedicated Catholic bloggers who routinely cite and link to These Stone Walls. They include Bishop Rene Gracida at Abyssus Abyssum, Father George David Byers at Holy Souls Hermitage, Father John Zuhlsdorf at What Does the Prayer Really Say?, and Deacon John Giglio at Deacon John’s Space, Scott Reichert at About.com Catholicism, and our very own graphic artist, Vincenzo, at Sancte Pater.

Many others have carried links to some posts on These Stone Walls including Spirit Daily, the National Catholic Register blog, Catholic Canada, New Zealand Conservative, Friends of Justice, and dozens of others. I add to them the example ofDaas Torah for whom justice and truth are clearly not expendable as he grapples with these same issues in the Orthodox Jewish community.

In 2012, These Stone Walls had nearly a quarter-million pageviews thanks to you. No midwinternight’s bad dream can stand against those open to truth and justice.