Trending Now
You are at:Home»Columnists»What is Community, Really?
By Marge Fenelon on June 26, 2012 Columnists, Featured, Marriage, The Social Order 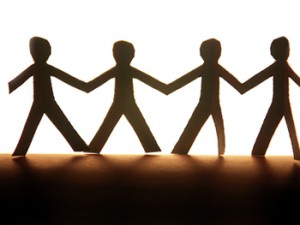 Lately, I’ve been involved in a number of ongoing efforts and conversations regarding community. Basically, we’ve been trying to get at the crux of what community really is and how to live it, and that’s got me yearning to dig deeper into the subject. We hear the word “community” all the time, used in many different contexts. A family can be considered a community of believers. A church can be considered a worship community. We refer to groups of dwellings as a neighborhood community and have community centers in which people attached to a particular municipality gather for events. Movements and religious orders call themselves communities. Then there’s the whole range of communities for senior citizens. All over the place we run into community this and community that.

But, what do we actually mean when we use the word community? Community is supposed to be good for us, something we need and thrive with. Without some kind of community in our lives, we can become isolated, depressed, and lethargic. The need for community can be so strong that we do things we wouldn’t normally do just to be part of one. Why are young people willing to commit heinous crimes in order to join a gang? They’re desperate to belong to a community, even if it’s a criminal one. Still, knowing we need community isn’t the same as understanding what it is and how to be one.

Everybody runs to Webster when they’re talking about the meaning of a word, so I thought I would, too. Just for fun. And was does the sage scholar have to say about community? This:

1. a. the people living in one locality
b. the locality in which they live
c. ( as modifier ): community spirit
2. a group of people having cultural, religious, ethnic, or other characteristics in common: the Protestant community
3. a group of nations having certain interests in common
4. the public in general; society
5. common ownership or participation
6. similarity or agreement: community of interests
7. (in Wales since 1974 and Scotland since 1975) the smallest unit of local government; a subdivision of a district
8. ecology a group of interdependent plants and animals inhabiting the same region and interacting with each other through food and other relationships

Eight excellent definitions, and eight excellent ways to look at community. But, there’s one essential word missing from every definition: unity. None mention the need for the community members to be bonded in unity. Common interests and participation, yes, but not specifically unity. Without true unity, a community is nothing more than a group of associated individuals.

I like best Fr. Joseph Kentenich’s way of defining community. Fr. Kentenich is a Servant of God and founder of The Apostolic Movement of Schoenstatt. He described true unity as an “in-, with-, and for-one-anotherness.” Isn’t that beautiful?

If we are in true community together, we live in one another, meaning that what affects you also affects me. Your cares are my cares, and my cares are your cares. You feel what I feel and I feel what you feel. There’s a connection between our hearts that binds us together, whether we’re in physical proximity or across the world.

That’s in-, with-, and for-one-anotherness.

The Early Christians demonstrated this type of community in both actual and spiritual ways. They “broke bread’ together as holy Eucharist for their souls, but also as sustenance for their bodies. They were aware that what the one did affected all the others. St. Paul cut right to the point in his second letter to the Thesalonians:

Sounds harsh, doesn’t it? But St. Paul knew that the Christian community would either thrive together or die together. If they didn’t live the in-, with-, and for-one-anotherness to the nth degree – all the way from the divine to the practical – it would be to their peril.