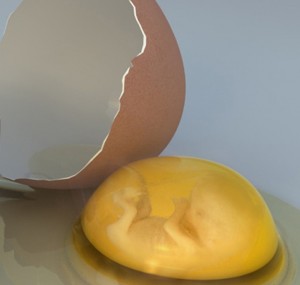 This is not an article about the reasons why chicken eggs may or may not be good for your health. This is an article about eggs that hold much more importance, for they are the eggs produced by females during their fertile time. But hold on to your seats, because there’s trouble all right. Lots of it.

Reproductive science is at the forefront of what can only be described as ghoulish manipulations of the human being at his earliest stages of development.

In Britain, the Human Fertilization and Embryology Authority (HFEA) is pursuing the creation of three-parent embryos. The organization has assured the British government that such practices are safe for all involved. This particular manipulation of the human embryo is defined as simply an “advanced” form of in vitro fertilization. How misleading. The “F” in IVF stands for fertilization—sexual reproduction—the fusion of sperm and oocyte resulting in a new human being. Yet the kind of research the HFEA is describing as “mitochondrial transfer” is asexual reproduction—the reproduction of a new human being without the immediate fusion of sperm and oocyte. Literally dozens of such asexual reproductive techniques are hidden from the public by simply calling it some form of “IVF.” What it really is is eugenics.

The HFEA is supporting a dangerous type of genetic modification of the human embryo, its DNA, and the human genetic material from three or four individuals at their earliest stages of development for the purpose of deconstructing and then reconstructing the human being in such a way that his genetic composition is drastically modified. This practice, described by one science writer as the newest form of eugenics, is alleged to be useful in avoiding certain diseases, but what it really represents is a further step in man’s quest to create the perfect human being.

On our side of the pond in California, legislators are proposing compensating women for their time and trouble if they are interested in donating their eggs. Currently payment for eggs is illegal. But it is argued that if payments of five to 10 thousand dollars were made available to women who are thinking about donating their eggs, research using such eggs would advance at a faster pace because more women would be willing to go through the process. There are many in the genetic and reproductive technology field who support such actions. These scientists firmly believe that, with the advent of increasing numbers of donated human eggs and human embryos resulting from IVF procedures, the reproductive life of the female can be extended well beyond current physical limitations.

The American Society for Reproductive Medicine, for example, says that a woman should not be prevented from bearing children simply because she has gone through menopause. In many cases, it is said, such women are healthy enough to have babies; they just need some help!

None of the scenarios noted above would be part of the scientific question to alter human existence if in vitro fertilization had not come on the scene 35 years ago. The practice has made it possible for the scientific capability to manipulate, destroy, and otherwise reduce human beings to nothing more than products that are useful to treat infertility, not to mention advance science that includes experimentation that results in the death of the embryonic child.

The human embryo—a member of the human family—is constantly being devalued in our Machiavellian culture. This is why, when North Dakota passed a personhood measure last week, opponents cried foul. The false allegation is always made that granting legal protection to “fertilized eggs” is bad for the reproductive technology business and a cruel act that denies infertile couples the right to be treated.

So much for honesty! The facts never seem to trouble these folks.

A human being at his earliest stages of existence is not a “fertilized egg” but a real human being—an individual with his own particular identity found in his DNA. A mere “cell” that is part of a larger organism (like a sperm, or an oocyte) is not an organism. It is just a cell. The new human embryo who begins to exist via sexual reproduction (fertilization) is an organism per se, consisting of one cell that will simply divide and multiply to make the organism bigger throughout development. Therefore, indeed, if it were established that such organisms were deserving of the same protection as the rest of us, given the fact that they are like the rest of us though smaller, scientists would no longer be allowed by law to manipulate or kill them.

Protection of human rights for any group of people, including every human being from his earliest stage of development, requires honesty and clarity of understanding. Zealots disagree. But at the end of the day, when we reflect on the ghoulish research and practices described here, it is easy to see why legal protection for people from their creation to death is long overdue.

The “trouble” inside the human egg is that nature has made it possible for the union of that egg with a sperm to result in another person being added to the human family. That is natural.

The real trouble is that those who reject nature’s design in favor of man’s folly deny the truth. That, my friends, is just another definition of evil. And that is always trouble.