Trending Now
You are at:Home»Featured»What is Socialism?
By Ryan Grant on November 15, 2011 Featured, The Economy 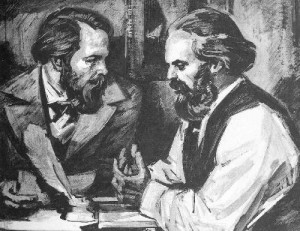 Lately, there has been the labeling of government officials, and Obama in particular, as socialists, and decrying government interventions as socialist per se. Now, I will not deny that Obama is probably a socialist of some sort at heart, and that he has many of the aberrant moral ideas as the socialists. However, the characterization of the government’s present behavior as “socialist” is a misnomer of the highest order, as we shall see later.

I myself have described Obama as a National Socialist (NAZI), but that is not because he is a true socialist, but because the Nazis were not true socialists. They agreed with many of Marx’s propositions, and were a movement of the Left (something that is often forgotten), but in practice the Nazis did not create a socialist government, they created a tyrannical government which functioned on a capitalist system. Likewise, what we have seen recently with the Obama administration forcing the CEO of GM to step down in exchange for government aid, is not an expression of socialism. In my opinion it is not even an expression of tyranny since the government is entering into a free contract with GM, and GM is freely accepting it to get the funds. Moreover, even if the government would decide, without loaning any money out, that certain CEOs needed to go, this would not be an expression of Socialism, but of raw state power which is called Statism. Statism is where the state is essentially all powerful and trusted to do the good. Such a system may indeed be or become tyrannical, but it is not socialist in any sense.

Incidents where libertarians claim Distributism is some kind of veiled Socialism, due to its predication of government intervention in the economy, betrays the same failure to grasp what Socialism is even all about. Socialism was never defined as government intervention into economic life or the running of businesses. If it was virtually every government in history would have to be socialist, even the Bush administration. Every government has regulated trade to a greater or lesser extent. Rather, socialism as predicated by its founder, Louis Blanc, and its most well known advocate (Marx) is when the government becomes the universal capitalist. In every system, for wealth to be created, capital must be expended to produce the wealth. This is something as simple as the food a man must eat and the tractors, plows, and livestock he must use in order to produce wheat, or as complex as the scientists that must be paid to develop a drug. This is true whether we are talking about Distributism, Capitalism, slavery or Socialism. There must be capital, and there must be labor to produce wealth regardless of where it comes from.

With Distributism a large portion or a majority of members of society both own the capital (which is not mere money but the means of production) and the labor. As Chesterton once noted, the beauty of ownership is that the tenet doesn’t pay rent, but the landlord does a little bit of work. In Capitalism however, these are often divided so that some men somewhere own the capital, and some men somewhere else labor, and the former keep the wealth while the latter get very little of the wealth that is produced. This creates a whole host of social evils and insecurities which go from the top down. Socialism proposes to solve all the problems of Capitalism by making the state a universal capitalist. This means that the state will own all the capital, that is, all the means of production available in society.

For instance Marx and Engles declared in The Communist Manifesto:

“When therefore, Capital is converted into common property, into the property of all members of society, personal property is not thereby transformed into social property. It is only the social character of the property that is changed. It loses its class character.” (Marx-Engels Reader, pg. 489)

Marx’s thought is simply that capital will be socialized by the state, not that every man’s piece of property will become that of the state per se, only if it is productive property. For Blanc, Marx, and other socialists the state should not be concerned with my pipe or a picture of my family, or even a book. Rather, the state will own all the horses, tractors, plows, tools, food and housing which a farmer uses to produce wheat or corn or other crops. The state will own the factory equipment and belts, gears, cogs, etc. which laborers will use to produce machinery, assembly line products, or any other type of factory equipment, as well as the metal, wire, and all raw materials utilized in production. This is what is meant by Socialism. It is not that the state will tell a CEO to pack his things as a condition for government aid—which he as asked for, nor is it that the state will start behaving in a tyrannical way. The state may very well behave tyrannically without a hint of Socialism.

Of course this is neither to say that tyranny is good nor that Socialism is good. Ultimately, any attempt to implement Socialism leads us to the Servile State: back to slavery. It takes us there faster than Capitalism, which must at some point re-introduce slavery to bring stability to markets and keep the bottom classes consuming. Socialism soon discovers that the means of maintaining itself are impossible.

To make the state the sole capitalist, two things are necessary. First, the state must be absolutely just and people must be content being told what to do in all things relating to business by the state (which is the owner). Hilaire Belloc describes it this way:

“Now the Socialist scheme requires both these very strong emotions, common to all mankind, to be suppressed. The people who run the State- that is the politicians-are to be absolutely just (although there is no one to force them to be just), they are to forget all personal wishes and to think of nothing but the good of those whose labour they direct and among whom they share out the wealth that is produced. We know by experience that politicians are not angels of this sort… You can not give this enormous power to men without their abusing it.

[Second], you will never get the run of men and women contented to live their whole lives entirely under orders. In exceptional moments a large part of individual freedom will be given up to the necessity of the State-as during the Great War; for if the State did not survive the individual’s life and that of his children would not be worth living. The individual in abnormal crises goes through a great deal of suffering for a moment in order that he and his should have less pain in the long run. But even in such crises a large part of liberty remains to him. Under Socialism he would have none. He would have to do what he has told by his task-masters, much more than even the poorest labourers now have to do what they are told by task-masters. And there would be also this difference: that everyone would be in that situation and there would be no way out.” (Economics for Helen, pg. 109-110)

Certain Catholic libertarians try and act as though Socialism is entirely condemned and that Capitalism has been praised by the Church. This is simply not the case. It is a simple and ridiculous principle. If anything other than Capitalism is socialist, and the Church has condemned Socialism, then it is possible to say that anything that is not Capitalism is condemned. This follows from their overall world view that everything not Capitalism is Socialism, and everything not Socialism is Capitalism. However, this overlooks both that the Church has condemned the grave separation between rich and poor as well as the control of the means of production by a few, present everywhere under Capitalism (Rerum Novarum, Quadragesimo Anno, and Centessimus Annus), and that the Church has described Socialism only as the belief that all means of production should be transferred to the state (abolition of private property) and a belief in class warfare only solvable by the state owning capital. (Rerum Novarum §9)

Hence, if any real progress is going to be made in solving economic woes, it is important to speak with the same terms. The debate as it is framed today often is useless since it does not clearly define the terms it uses, and often obfuscates meanings. It is one thing to identify the abuse of state power from Bush to Obama with the same evils of fascists and communists, it is quite another to say that the United States is becoming a socialist state. Ironically, by defining Socialism as anything contrary to free market Capitalism, as the Right attempts to do today, is to say that the United States has been a socialist country longer than there have even been socialists. From the very beginning, the pre-Revolutionary government printed its own currency (colonial script), states had established religions, state and federal government imposed tarrifs, made land grants (Homestead Act), gave lavishly to railroads, all while Marx was yet to appear on the scene.

Once we get out terms straightened out, then it becomes evident that there are alternatives to Hudge and Gudge, and it is not a necessity that we must be either socialist or capitalist (thank God). We simply need men who are forward thinking enough in both government, business, and the average citizenry to implement the solutions. The abuses complained about by libertarians today are the same abuses which have evolved continuously on the same principles for hundreds of years, until now they have come to fruition in the coming totalitarian state of Orwell and Huxley’s imaginative writings.