Trending Now
You are at:Home»Featured»What the EU’s Culture War Against Hungary is Really About
By J.C. von Krempach, J.D. on January 25, 2012 Featured, Law & Justice 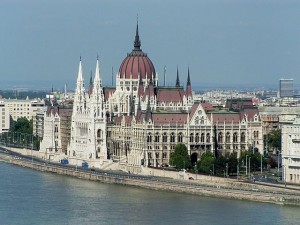 In recent days there have been a lot of media reports about Hungary. According to those reports, the country not only is in a very bad shape economically, but there is also a risk that the Government, led by Prime Minister Viktor Orban, was trying to overturn democracy and install a right-wing dictatorship that is completely out of line with “European values”.

The chorus is led by politicians like Luxembourg’s foreign minister Jean Asselborn, who slammed the country as being on its way to becoming “the blemish of the EU”, or the European Parliament’s Vice President (and Lenin-Double) Marin Schulz, who insinuated a lack of legitimacy of the current government when he said: Everybody in Europe is called upon to support the democratic opposition in Hungary.

If information like this is repeated often enough in the mass media, the public will end up believing that something is going seriously wrong in Hungary, and that the international community must join all its forces to get rid of a dangerous oger who is going to erect some kind of neo-fascist regime right in the very center of the continent. It all reminds very much of the hysteria back in 2000, when Austrian conservative leader Wolfgang Schüssel dared to form a new Government that did not include the Socialist Party. In other words: where Social Democrats (or, in the case of Hungary: ex-communists) lose control, the end of democracy must be nigh…
Although this blog only reaches a limited readership, I think I should do what is within my powers to rectify what appears to be a deliberate slandering campaign of the EU’s liberal left against a government that they see as a threat against their cultural hegemony. Presumably, most of our readers are Americans, and hence will (quite understandably) be unfamiliar with Hungarian politics and recent history. Thus, let me explain the situation as follows:

1. While in Germany after WWII there was a process of “de-nazification”, no comparable process took place in most countries of the former Soviet block. There were elections where the communists were voted out of power, but their organisations were never dissolved, nor was there any systematic attempt to cleanse the public administration from former communist party members. In some of those countries, legislation that stands in the most radical contradiction to human rights and democratic values still remains in force today – the most blatant example being the so-called “Benes Decrees” in the Czech Republic. There was no real rupture with the past – instead, the former communists just changed the name of their party, presented themselves at the next elections, and, in certain countries, were back in power fairly quickly. As a matter of consequence, many members of Eastern Europe’s contemporary political elite are in fact former communists (if their pre-1989 party membership was not always motivated by inner conviction, then at least by opportunism). During the enlargement process that preceded the accession of formerly communist countries, the EU did not exert any pressure to address the problem, which, as a consequence, has been imported into the EU’s own institutions: following the EU-accession of those countries, many of those ex-communists have made careers in the EU institutions, including the European Commission and the Parliament (where, quite unsurprisingly, most of them have joined the ranks of the Socialist and Communist groups).

2. In Hungary, the communists actually were clever enough to anticipate the revolution of 1989, and to initiate the transition to democracy before anybody else did. It was communist leaders like Gyula Horn, Imre Poszgay, or Miklos Nemeth, who allowed Eastern German refugees to cross the border to Austria, cut down the iron curtain, delared Hungary’s renunciation of the Warsaw Pact, and called the first democratic elections. This won them the praise and confidence of Western elites, which is why Hungary never came under any pressure from the outside to revisit its comunist past. As a consequence, many communists were never from the posts they had occupied before 1989, but stayed on.

3. In the years following 1989, Hungary has been led by ex-communist governments from 1994 to 1988 and from 2002 to 2010. This has not done the country much good. Although the country was received into the EU as a reward for its role in 1989, many structural reforms have not been carried out. Instead of cutting public spending and initiating thorogh economic reform, subsequent governments (including a conservative government led by Mr. Orban from 1998 to 2002) found it more convenient to “meddle through”. This is why Hungary’s economy today is in such a bad condition.

4. The Socialist government led by Ferenc Gyurcsany acquired a particularly bad reputation when, shortly after his electoral victory in 2006 an audio tape (allegedly from a closed-door meeting of the Socialist Party) surfaced on which he was heard saying that “we have obviously been lying [viz.: about tha state of the country’s financial situation] for the last one and a half to two years”. It was at this moment that the public suddenly realized how bad the country’s situation really was. the publication of the tape led to riots on the streets of Budapest, but Gyurcsany refused to resign. However, he was a lame duck from that moment onwards, and the following elections in 2010 resulted in a landslide defeat of the former communists. This time, the Hungarian Electorate wanted a real change. The elections undoubtedly were fair and democratic, but the results for the conservative “Fidesz” Party was truly overwhelming, securing them more than 2/3 of the seats in the National Assembly.

5. The new Prime Minister of Hungary is Viktor Orban, leader of “Fidesz”. With a 2/3 majority in the National Assembly (263 seats out of 386), Fidesz was able to enact a new Constitution. While there can be no serious doubt that this new Constitution corresponds to all democratic standards one could reasonably ask for, it is also true that it does not represent a “compromise”. Here are some quotations that are clearly indicative of those values:

M. Article
(1) Hungary protects the institution of marriage between man and woman, a matrimonial relationship voluntarily established, as well as the family as the basis for the survival of the nation.
(2) Hungary supports child-bearing.
(3) The protection of families is regulated by a super majority law.

II. Article
Human dignity is inviolable. Everyone has the right to life and human dignity; the life of a foetus will be protected from conception.

The Constitution also has a preable beginning with the words “Isten áldd meg a magyart” (“God bless the Hungarians” – the first words of the national anthem).

It is a Constitution based on Christian values. The opposition, consisting of the ex-communist MSZP, the extremist right-wing “Jobbik” Party and the Green-Liberal Party “Politics can be different” (Lehet Más a Politika) voted against it, which however did not prevent it from being adopted with the necessary 2/3 majority.

6. The media attacks against the current Hungarian Government can thus to a large extent be explained as a culture war against the Christian values that are expressed in the new Constitution. The campaign is led by the defeated ex-communists, who, having been victed from power at home, are now mobilizing their allies in the European Parliament to fight back on their behalf. It is no wonder that one of the first charges against Mr. Orban was that he had “imposed” this new Constitution without duly involving the opposition parties. (I commented on this in a previous post. The reproach is nonsensical and can only be explained by the bad faith of those making it. In actual fact there had been a wide public consultation, including with all political parties represented in Parliament. It was the ex-communists who, when they realized that (inter alia) references to God, the family, marriage, and the protection of unborn life were going to be included, pulled out of the process and started to campaign from abroad. In addition, one is tempted to wonder which opposition should have been treated with greater forbearance than actually was the case: the ex-communist “Socialists” scarcely have more votes that the extreme-right “Jobbik”, so that any benefit given to them in terms of institutionalized minority rights would equally have to be given to “Jobbik”. Would that really be a reassurance for the politically correct EU?)

7. Given that issues like the family, the protection of unborn life, etc. do not fall within the competence of the EU, it seems hardly possible that any of the above-quoted provisions violates EU standards. There are no EU rules to legalize abortion (which indeed is illegal in Ireland and Malta, and regulated under rather restrictive terms in Poland), nor is there any obligation for the State to be “secular” (besides Hungary, many other EU Member States, including Germany, Ireland and Greece, invoke God in their respective Constitutions). There also is no obligation under EU law to recognize “same sex marriages” (a point that has, with regard to the European Human Rights Convention, also been clarified by the European Court on Human Rights). Thus all allegations concerning these issues are obviously unfounded. However, it comes ats no surprise that the most radical anti-life and anti-family campaigners (such as the homosexual lobby ILGA and its allies in the European Parliament) are at the forefront of the campaign.

8. The newest diatribes against Hungary’s government deal with issues such as the nomination of new constitutional judges (again, and quite absurdly, the charge is that the opposition – i.e. the ex-communists and the extreme right “Jobbik” – have not been allowed to nominate any judge, which is of course outrageous…), or a new law that provides the government considerable influence on the policies pursued by the country’s central bank, or the new law on mass media. Most of these issues, however, again are clearly outside the competence of the EU. There are no common EU rules on the nomination of constitutional judges (the UK even has no Constitutional Court!), nor are there any common standards to protect the independence of central banks (Hungary is not part of the Euro zone, and even within the Euro zone each country follows different approaches with regard to the role assigned to its central bank).

Certainly, some of the policy choices made by Mr. Orban seem debatable, but it is absurd slander to say that these choices, just because they are not shared by the destitute ex-communist party or the extreme right-wing “Jobbik”, were in contradiction to any “common European values” Hungary has taken a committment to comply with. On the contrary: the above quotations show that it really is Hungary that defends true moral and cultural values against the contemporary “mainstream” represented by the EU establishment.