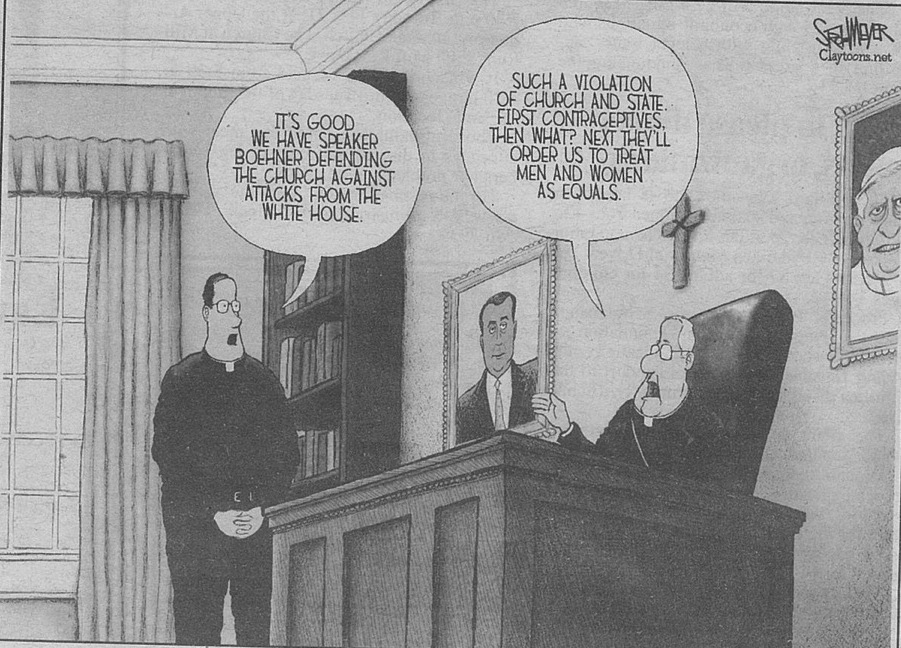 A very conscientious Catholic, Harold Baumeister, saw this cartoon in his hometown paper and had the conviction and gumption to do something about it! He wrote to the editor (letter follows) to let him know that he was deeply offended by this crass cartoon and that the pope and all Catholics will fight to defend our freedoms. Furthermore, Speaker Boehner is not the head of the Catholic faith!

But there is more to this vile cartoon than the things Harold pointed out. Look closer. Not only does the priest-figure make a comment about Catholics needing Boehner to defend the Church, but the sitting priest-figure replies, “Next they’ll order us to treat men and women as equals.”

Now this is a low blow! It implies that because the Church doesn’t accept contraception and abortion, it treats women as less than men. The reality is just the opposite. Because the Church teaches that a woman is to be loved for her whole self, which includes her fertility, she is much less likely to be objectified. It is the wide spread acceptance of contraception and abortion that has caused women to be less than men, for when a woman is objectified, she is becomes no more than a plaything. Unfortunately, in current society, women have become not only less then men but less than human.

The only thing this cartoonist unknowingly got right is that he talks about “…defending the Church against attacks from the White House.” And this is exactly what the White House has done. It has made an outright attack on out faith, on our Church.

So, thank you Harold for your courage and follow through.

As a Christian, a Catholic and a Veteran, I was deeply offended by the Commentary-Political Cartoon published in the Hilliard Northwest.

News dated February 15, 2012. The cartoon makes a mockery of our plight to preserve our Christian constitutional religious freedoms.

It depicts our religious and our spiritual leader, the pope, as defenseless against the current U.S. Government Health Care Insurance mandates. The cartoon says we are depending on the current House Speaker to defend these precious freedoms.

I, for one, would like to make your readers aware that our current religious leaders and laity in the Catholic Church are very capable of defending our precious religious freedoms with or without the current House Speaker’s help. Let me also add for your readers’ information that these published mandates not only violate Catholic religious rights, but Christian and Jewish rights as well. As Glen Beck recently stated “We are all Catholic when it comes to defending our religious freedoms in this country.” Publications like this have awoken a sleeping giant. The media has always used Christians and Jews as punching bags just, as this cartoon has portrayed. Why is it that the media never publishes Muslim cartoons in their commentaries in the same context? Would something like that not be politically correct? The answer is simple. The media must be fair and balanced in their commentaries and offend no religion in the process.

As a Veteran, I am heartbroken that our country seems to have forgotten that our Founding Fathers laid the foundation for our religious freedoms and many good men and women have fought and died to preserve them throughout our history. I ask you, have we forgotten them? How could we do such a thing?  We need to remember them and know they fought and died to preserve our freedoms. Don’t be fooled. “FREEDOM is not FREE.”