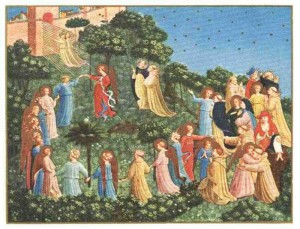 I have a lot of crazy things to belong. Most were embarrassing or even downright stupid: such as smoking, swearing and pretending you had an active sex life, skipping school, driving too fast, bullying the poor boy that sat in front of me in math class, or making fun of a teacher. It feels as if my entire teenager years were spent trying to fit into some specific group or place.

While perhaps these activities are typical at that age, they were still dangerous, absolutely awful and in the end, downright sinful.  Yet, I didn’t care; I suffered from an earthly, misguided, tunnel-vision.  I worried only about what I could see, without a thought beyond this realm or of the eternal consequences of my behavior.

In my teens, I belonged to what was below. I cared what other people thought of me. I sought acceptance and approval from my peers whatever the cost. It was an incredibly egocentric period, yet ironically a time filled with uncertainty and insecurity.

My dreams included marrying rich but also being rich and famous myself. I read Cosmo and Self magazines and strived to look as model-like as possible, and judged and scorned those who did not. In parties, I sought the most popular people to impress, and joined the ridicule of those not in that group.  My validation of worth came from putting down others.  This world and being a significant important part of it enveloped my whole being.

I wish I could look back at my life and say these thoughts and behaviors were contained to my immature teenage self, but alas that is not so. Gossip, judging others, making poor choices to belong to a particular crowd would follow me throughout most of life until I discovered truth.

I learned, through tradition and scripture, that there was more, much more, beyond this earthly dwelling place, and finally allowed ‘what is above’ to matter more than ‘this world’. This renewing of my mind was not easy, and came with many tears, regrets and painful confessions, yet it was not impossible, and the freedom and joy I now feel striving not belong to the world, is by far more amazing than anything I attempted to attain here below.

As you think about your current state of life, can you say you are more concerned with the things of Heaven, or are you rooted in the things of earth?