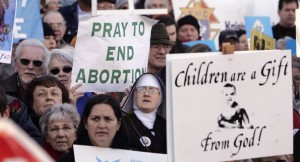 Pennsylvania State Rep. Babette Josephs, a Philadelphia Democrat, recently attacked her pro-life women colleagues in the state legislature for supporting a bill that would allow women a chance to see an ultrasound of their unborn child before an abortion, calling them “men with breasts.” But who are the real “men with breasts”?

As one of those pro-life women Senator Babette Josephs disparages as “men with breasts,” I would like to point out that it is not people in the pro-life, pro-family movement who have made women like men. No, Sen. Josephs, it is the radical philosophy that you and your pro-abortion allies support that has had this gender-bending effect. From the sixties onward, women have been force-fed the birth control pill, told that they should leave the home, leave their babies with total strangers in daycare, and work as hard as men, all this so they may be “fully liberated.” As a physician who treats women who have bought into this myth for exhaustion and depression, I see the toll this flawed view of femininity takes not only on women, but on their poor children as well.

Who has made women like men? It is those on your side, starting with women like Margaret Sanger who helped create the pill. By flooding a woman’s body with powerful, steroid-based drugs, the pill shuts down a woman’s natural reproductive system and essentially turns women into sterile “play toys” for men. This, in turn, encourages unfettered sexual activity and has led to an epidemic of sexually transmitted diseases. The pill also has a number of harmful side effects, including blood clots, strokes and increased rates of cervical and breast cancer.

You speak of “men with breasts,” Babette, but what about the tens of thousands of “women without breasts?” These are women who have lost their breasts, literally, to cancers caused by oral contraceptives and abortions.

You want to know who has made women like men? Women like Health and Human Services head Kathleen Sebelius who consider harmful treatments like contraception, sterilization and abortion to be “women’s preventative care.” Since when did preventing and killing babies become preventative health care?

You want to know who has made women like men? Politicians like former Speaker of the House Nancy Pelosi and Senator Barbara Boxer (D-CA) who support Planned Parenthood with immoral legislation, and fund it with hundreds of millions of tax dollars. I’ve been to Planned Parenthood. Their counselors lie to women, telling them that the 12- and 16-week infants being aborted are merely “prehuman” tissue.

You and your pro-abortion allies all promise to make abortion rare, but last year there were over 45 million recorded abortions worldwide. I guess you were wrong about that, too.

Women deserve to see the truth with their own eyes, incontrovertible evidence that they are carrying innocent children in their wombs. An ultrasound will help thousands of Pennsylvania women realize that they are already mothers—with breasts. This knowledge will empower them to do the right thing: to love and protect the babies growing within them.