Trending Now
You are at:Home»Featured»“Who Do You Say That I Am?”
By Rev. Tucker Cordani on August 24, 2014 Featured, Live in Christ 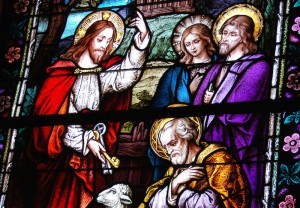 “Who do you say that I am?”  That is a question that we are called to answer every day.  Who it he?  Is he God?  Is he the Lord of our lives?  Or was he just a good man who healed the sick and got crucified for crimes against the Jerusalem establishment a long time ago?  Does he live today in our hearts?  Is he worth talking about anymore?

Many in the world today believe that speaking about God is a crime, in Iraq where Islamic fundamentals are killing American journalists and Christians, and in Tennessee where a girl got kicked out of her high school class for saying “God bless you,” when another student sneezed.

Jesus asks that question, “Who do you say that I am?”  because he really wants to know. Like the president, Jesus is not interested in public opinion. He is not John the Baptist; he is not Elijah or Jeremiah or any of the prophets. He knows who he is and is not ashamed to live his truth.  He is the Son of Man, the Son of David, the Son of Mary and Joseph, the Son of God. But he wants us to answer the question in order to affirm our faith in him.

We can’t be on the fence about it. God is either everything or he is nothing. God either is or he isn’t.  In the Letter of Saint James the author writes: “Let your ‘yes’ mean ‘yes’ and your ‘no’ mean ‘no’ ” (Jas 5:12b). Even James “the brother of the Lord” struggled with the question until he saw the Risen Lord and accepted unequivocally the truth of the Jesus’s identity. Then he became a saint.

God is a mystery, is beyond our comprehension. How can the finite understand the infinite? The Apostle acknowledges his own struggle with the mystery of the history of salvation. “Who has known the mind of the Lord?  … “O, the depths of the riches and wisdom of God!  How inscrutable his judgments, and how unsearchable his ways!” (Rom 11:34, 33). More will be revealed.  Keep praying.  Keep listening and then speak your truth. Speak openly without fear the truth about Jesus, who says, “Great will be your reward in heaven.”

The gospels tell us plainly who Jesus is, because the Holy Spirit inspired the evangelists to write the truth about the Lord, and all four stories agree that Jesus is the Son of the of God. Peter, the prince of the Apostles, becomes the spearhead of this truth when he answers Jesus’s question, ”Who do you say that I am?” on behalf of the Apostles.

Peter’s affirmation of the identity of Jesus goes a long way back, a blast from the past, and continues into the future and the Church in which we worship today.  God continues to reveal himself to us and we must listen to what he says.  Yet God only spoke one word, the Word, into the darkness and created the light (Gn 1:1-3; Jn 8:12).  Jesus Christ the only Son of God is the light of the world.

How do we know and believe this?  In the 1960s the Church held a council, the Second Vatican Council. One of the principle truths expressed by church fathers at the council was the “Constitution on Divine Revelation”, Dei Verbum, or “The Word of God.”  Dei Verbum tells us that God speaks to us as a father speaks to his children, with tenderness and love. “In his goodness and wisdom God chose to reveal himself. … Out of the abundance of his love he speaks to us as friends … and lives among us” (Dv 1:2).  “Since then the Holy Spirit has appeared on the earth, and continues to live among us” (Bar 3:38) as God-with-us (Is 7:14).

God wants us to know him better and grow closer to him. To do this, he long ago initiated a conversation with the world beginning with Adam and Eve so that we may know him as a Father and as a friend. Accordingly, the human race could not know God we as humans simply don’t have the intellectual capacity to know and to believe¾were it not for his providence, his willingness to become one of us, and his deep desire that we accept him for who and what he is: the one, true, and eternal God.

To prove this to us God sent his Son into the world, “the image of the invisible God” (Col 1:15).  How does one to grow to know and to love one another?  By spending time together as friends.  Spending time together strengthens our relationships.  Thus Jesus Christ the only Son of God spent three unforgettable years with the human race. Many came to accept them; many more rejected him.  His legacy, life, and preaching remain with us. We continue to study them today. Such is the immensity of the Christ-event.

To ensure that the Word of God remains a living Word, Jesus, the Word made Flesh, established a sacred order of men and woman to carry on his work of building the kingdom of heaven after he rose from the dead and ascended into heaven. He promised that he would come again. Thus he put the question to his disciples: “Who do you say that I am?”

Peter, the prince of the Apostles, spoke first: “You are the Christ, the Son of the living God.” For his bravery  — how difficult it is for one to make an authentic confession of faith — Jesus conferred on Peter the keys to the kingdom. In that light the members of the faithful have looked upon Peter as our first “pope.”  Since that day an unbroken chain of men have sat in the chair of Peter and held fast to the confession of faith.  The question remains, the answer never changes — if we are able to accept that Jesus Christ is our Savior.

Jesus’s provocative question put to Peter is a question we are called to answer every day.  This is not an easy admission to make, for in the midst of a preponderance of persecution of Christians worldwide, countless men and woman who have spoken their truth have died — popes, bishops, priests, deacons, religious, and the laity. A high school student in Tennessee. The question is put to us today:  “Who do you say that I am?” If we believe and speak with the wisdom of revelation, then we are impelled to speak the truth as did Peter that day in Caesarea-Philippi: “You are the Christ, the Son of the living God.”

The Word of God, expressed through Divine Revelation, provides the assurance that Jesus is the way, the truth, and the life.  “The Word provides us with the certainty and knowledge of Christ as the Son of the living God.  It provides the nourishment of the Scriptures for the people of God, to enlighten our minds, strengthen our wills, and to set their hearts on fire with the love of God” (DV No. 6:23).

Revelation is guaranteed; it happens daily in ways worldwide and personal.  Yet it all comes back to the original question: “Who do you say that I am?”