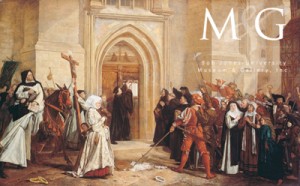 In part one we discussed the importance that the Protestant principle of sola scriptura still has as we near the 500th anniversary of the “Reformation.” Now it is time to get into the meat of the argument by examining the classic Protestant interpretation of two key verses of Scripture.

“All Scripture Is Inspired”

The Bible verses that demand the most attention and have the longest history of being used in the Protestant defense of sola scriptura are 2 Timothy 3:16 and 17. Let’s take a look at them in context beginning at verse 10:

10 Now you have observed my teaching, my conduct, my aim in life, my faith, my patience, my love, my steadfastness,
11 my persecutions, my sufferings, what befell me at Antioch, at Ico’nium, and at Lystra, what persecutions I endured; yet from them all the Lord rescued me.
12 Indeed all who desire to live a godly life in Christ Jesus will be persecuted,
13 while evil men and impostors will go on from bad to worse, deceivers and deceived.
14 But as for you, continue in what you have learned and have firmly believed, knowing from whom you learned it
15 and how from childhood you have been acquainted with the sacred writings which are able to instruct you for salvation through faith in Christ Jesus.
16 All scripture is inspired by God and profitable for teaching, for reproof, for correction, and for training in righteousness,
17 that the man of God may be complete, equipped for every good work. — (RSV, Catholic Ed., Scepter)

Although the argument has gone on longer, we can exhaust the various lines by taking it up at the point where John Henry Cardinal Newman entered the discussion. Protestants look at the words of verses 16 and 17 and reason that since Scripture can make a man of God “complete, equipped for every good work,” Scripture alone is the sole rule for faith. Cardinal Newman pointed out that Protestants prove too much by this argument since the New Testament (NT) writings were not what St. Paul was referring to — he meant the Old Testament (OT). So if these verses were an expression of the principle of sola scriptura, they would have ruled out reception of the NT.

Newman was laying out the historical Catholic understanding. For instance, Chrysostom (c.347- c.407) commented on this question in Homily IX: “All what Scripture? All that sacred writing, he means, of which I was speaking. This is said of what he was discoursing of; about which he said, ‘From a child thou hast known the holy Scriptures.'” Chrysostom is here pointing out that since the only Scripture Timothy had access to as a child was the Old Testament, St. Paul could hardly have been including in “all Scripture” the still-unfinished and not-yet-collected writings of the NT.

Protestants counter that the NT is certainly included in Paul’s “all Scripture” or at least that portion of it that was already written at the time he wrote to Timothy. That would be the letters of St. Paul and possibly one of the Gospels. We do know from St. Paul’s words at 2 Timothy 4: 6 that this letter was written very near the end of his life.

Although the Catholic understanding is more coherent with the text, we Catholics certainly are not denying that, in principle, what St. Paul says about the usefulness of “all Scripture” does apply to both the OT and the NT. So it is to what he said on that score that we ought to direct our attention and that of our Protestant friends, because it is here that the real burden of the Protestant argument lies. To reiterate: they reason that since Scripture can make a man of God “complete, equipped for every good work,” Scripture is the sole rule for faith.

Now, one line of Catholic argument against this has been to look at the word “complete” and notice that other things are also said in the Bible to make one complete, such as endurance, mentioned in James 1:4.

Protestants in turn have pointed out that other instances of the English word “complete” or “perfect” are not truly parallel with 2 Timothy 3: 17, because the Greek word used there is different from the Greek word used in the other passages. Since most of us, and the Protestants with whom we dialogue, are unlikely to be conversant in Greek, it is most helpful to focus on a point that will make these ancient language vocabulary discussions irrelevant.

Regardless of the Greek word used in 2 Timothy 3: 17, Catholics and Protestants agree: the Christian could never be more adequate, more complete, more equipped for every good work than Jesus. Jesus is precisely what Pilate called Him when he said, “Behold the Man!” He is “the Man,” the human person par excellence. To be conformed unto Him is the goal of all true spirituality, of all Bible study, too, for that matter.

Ask your Protestant friend to hold onto that thought while you read together Ephesians 4:11-16:

11 And his gifts were that some should be apostles, some prophets, some evangelists, some pastors and teachers,
12 to equip the saints for the work of ministry, for building up the body of Christ,
13 until we all attain to the unity of the faith and of the knowledge of the Son of God, to mature manhood, to the measure of the stature of the fulness of Christ;
14 so that we may no longer be children, tossed to and fro and carried about with every wind of doctrine, by the cunning of men, by their craftiness in deceitful wiles.
15 Rather, speaking the truth in love, we are to grow up in every way into him who is the head, into Christ,
16 from whom the whole body, joined and knit together by every joint with which it is supplied, when each part is working properly, makes bodily growth and upbuilds itself in love.

Now all that is needed to defeat the argument of sola scriptura is to demonstrate from Scripture that something else accomplishes in Christians what Protestants claim Scripture accomplishes — and these verses in Ephesians do that.

But we can draw out the logic here a little further. Let’s ask this question: Could I use this passage in Ephesians to make a case for sola ecclesia — to say that all we need are the various ministries of the Church; we don’t need the Bible? Of course not! Indeed that would be an absurd claim to make, wouldn’t it? Here I am using a scripture from the Bible! Obviously I can’t use this scripture to claim that we don’t need the Bible. To attempt to do so would be self-refuting.

Well, the Catholic case here is that the Protestant use of 2 Timothy 3:16, 17 is equally self-refuting, although not quite as obvious on the surface. Let’s use an illustration to demonstrate it: Imagine that a group of Christians have gone to hear St. Paul preach while he is under house arrest. After hearing him speak, one of them pipes up and says, “Look here, Brother Paul, we do not really need to listen to you. I’ve been to visit Timothy and he has a letter from you that says that the Scriptures are the sole rule of faith.”

In the next article we will explore what that apostolic authority was saying to Timothy — and to us — about the Scriptures.