Trending Now
You are at:Home»Featured»Will There Be Zombies? Part 1
By John Médaille on August 19, 2011 Featured, The Economy 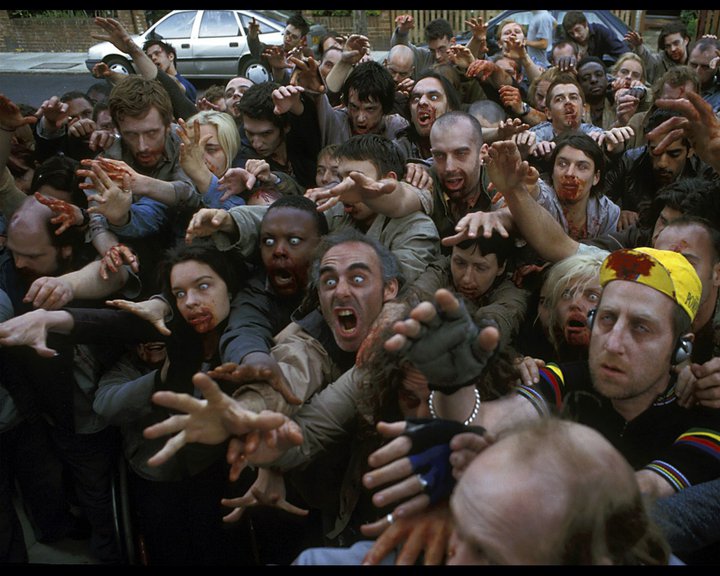 As we all know, the end of the world is coming soon. No, I don’t mean the eschaton, the final event in which the Son returns all things to the Father. That will be, by all accounts, a very cinematic event, full of all sorts of special effects. It will be, no doubt, very entertaining for those fortunate enough to be raptured in time to get a ring-side seat to the festivities to enjoy the spectacle of suffering for all those left behind. However, it is an event I know nothing about—and certainly not the day and the hour—and even if I knew that, there is not much I could do about it. I would like to address a quite different sort of end, the end of our world. Now, while the eschaton will come but once, the end of the world in this sense is something that happens with appalling frequency, and is usually an appalling event. These events are, at a minimum, the loss of familiar things, the comfortable and customary things, and even when they are things that we do not particularly love, and may even especially hate, they are at least things that we are used to, and giving up such things can be wrenching.

I will immediately concede that predictions of collapse are far more frequent than actual collapses. What the predictions generally ignore are two things: the first is the remarkable adaptability of human beings, their ability to create institutions “on the fly,” as it were; the second is the remarkable courage and endurance of many people in the face of adversity. Indeed, it is the virtues, and the virtues alone, that equip us to survive difficult times. Justice, courage, temperance, and prudence, perfected by faith, hope, and caritas. Still, I am going to go out on a limb and predict that collapse is imminent; indeed, I do not believe that constitutional government, or such of it that remains to us, will survive to the end of the decade, and that the Union, and the world with it, will fracture into many pieces.

Now, every collapse is different, but the particular shape of the collapse is given not just by the conditions that cause it, but by the quality of our response; men will go mad, or men will go rational, and that will seem like a kind of madness. And it is in this regard that the study of the coming collapse is important for this group, for it is only groups like this, I believe, that can form a remnant, and the purpose of a remnant is to conserve true faith and knowledge, and, when the moment comes, to rebuild the world, or more importantly, to rebuild their own neighborhoods. That moment, I believe, is fast upon us. It is the remnant that must lead the way, must exercise that rational madness which will allow us to rebuild—if not the world—then our communities, and these functioning communities must show the world the way to rebuild itself.

What I wish to do here is to examine the causes of the coming collapse and the shape it might take, and then to examine the resources the remnant can bring to the world. And most especially, I want to examine the one factor that makes this collapse unique in all of history, and that is the presence of the zombies, and I want to answer the question posed by popular culture, namely, “Will there be any zombies?” More of this anon.

Let me start by noting the whole problem of the collapse of complex societies. Certainly, we live in an extremely complex world, one which we have difficulty understanding. Now, social complexity itself begins as a way to make systems more robust, and to incorporate as many elements of society as possible into a coherent system. But as time goes on, parts of the system that were designed for one purpose get used for another, and usually inappropriate, purpose. Each little part of the system acquires its defenders who will not let it change, or will change it in complex and inappropriate ways. When this happens, systems become extremely brittle, and by “brittle,” I mean that a failure in a small part of the system will cause massive failures in large parts or even of the whole system.

We just saw a perfect example of this in the financial markets. There, a failure in one small part of the system, the sub-prime mortgage market, caused a failure of the whole financial system. The sub-prime market was, at its height, worth about $1.4 trillion. Most analysts understood that the market was failing, but they were not particularly worried about it, since the market was so small in the overall scheme of things. What they failed to understand was that a comparatively few mortgages had been magnified to make the whole system brittle. What happened is that the banks, after making the loans, would package them into securities, called MBSs, which they sold to hedge funds. The hedge funds borrowed money from the banks to buy loans the banks had made to home-buyers. Then the hedge funds re-packaged the MBSs into CDOs which they sold to investors, which the investors bought with money they borrowed from the bank. Or another hedge fund might buy them in combination with CDSs to create synthetic CDOs, with money they borrowed from the banks. The whole system was supposed to be “insured” by something called a “credit default swap,” or CDS, which was sold by insurance companies like AIG. But since nobody believed there could be a general failure, AIG and others did not keep reserves for insurance losses; they just treated the premiums as “free money.” Further, investors (using money borrowed from the banks) began buying massive quantities of CDSs on securities they did not actually own. It is as if all of your neighbors started buying a fire insurance policy on your house. If that were to happen, two things would follow. One, your neighbors would all be encouraging you to smoke in bed, and two, when you did have a fire, there would be not one claim, but hundreds, and no insurance fund can survive that.

The sub-prime market reached default rates of 16%, the whole structure fell apart and achieved the positive miracle of causing $30T in losses in a $1.4T market. But beyond these losses of nominal wealth, there was the recession in which people who had no involvement in this elaborate structure lost their jobs, their homes, their positions in their communities, and perhaps even their marriages and self-respect. Here we see how complexity works, or fails to work, in its brittle stage: a small failure in a small market causes massive failure throughout the system. Nor can such systems be easily repaired, as we are discovering. Despite all the pundits and politicians, brimming over with good advice and simple fixes, it turns out that the system can only be “fixed” in one place by breaking it in another; every patch weakens the whole, and every “solution” is its own recipe for disaster.

When we go through the catalog of our economic, political, and social systems, we find a network of the same brittle systems, all of them ripe for failure, and any of them sufficient to cause the failure of the whole system. Our systems of trade, defense, education, entertainment, agriculture, housing, transportation—you name it—turn out to be fragile, dysfunctional, and beyond repair. They are all systems of inter-locking fragility, such that the whole system is brittle and on the verge of collapse. I would like to focus on just two of these systems to illustrate our situation: energy and advertising.

As for energy, our entire industrial civilization for the last two or three centuries has been dependent on cheap energy, first coal and then flow-able oil. But we are now in the stage of peak oil, and the system cannot be sustained. Peak oil does not mean we are running out of oil, and certainly not that we are running out of energy; that we will never do since we cannot outrun the sun, the source of all our energy. But we are using four barrels of oil for every barrel we discover, and what we are discovering is in increasingly difficult places and less useful forms. The sweet, light crude that was the mainstay of the oil age is in increasingly short supply, and the other forms are more difficult to refine. Indeed, much of the oil isn’t pumped at all, it is mined, as in shale “oil” or the tar sands. These sources are expensive to turn into flowable products that can actually be put into, say, a car; and the energy-in, energy-out ratio is very low. And the use of corn-ethanol produces little more than it consumes, and makes food compete with fuel for farmland.

The debate over peak oil is over, because it is reflected in the prices. On the day we invaded Iraq, oil was at $27/bbl, and that was considered high, a reflection of uncertainty in the Middle East. Now it is four times that amount. And we see a consistent pattern. As economic activity picks up, oil use increases, which drives up the price, which depresses economic activity, which again lowers usage and hence the price, but only along an upward trend line. And so it goes. Oil acts as a tax on productivity, which places a cap on the economy.

Now come the intricate dependencies. Our global trading system, agriculture, transportation, and urban systems all presume cheap oil and will not work without it. For example, when the price of oil was driven by speculation to $140/bbl, the price of shipping a container from Shanghai to Los Angeles went from $2,000 to $6,000, which wiped out any wage or regulatory advantages that the Chinese had, and companies made plans to bring their production back to our shores, which would have devastated the export-dependent economies of China, India, and others. The crisis passed, but the lesson was clear: at somewhere between $120-$130/bbl, the world trading system breaks apart, and we are not far from that.

A second dependency is agriculture, which is largely oil-based. Now, Americans have largely given up on eating food, or at least anything our grandparents and great-grandparents would have recognized as food. Increasingly, our diets consist of highly processed and manufactured food-like substances, composed mainly of corn syrup, starches, fats, salt, and the chemical compounds necessary to keep the whole thing from instantly rotting. But the farms themselves have become extensions of the factory food systems, where the soil is no longer used to grow food. Rather, the soil, or what remains of it, is merely used to hold the plants in the ground; it must first be sterilized, like instruments in a surgeon’s operating theater, and then a variety of petrochemical substances are applied to stimulate growth, fight disease, and ward off pests. The crops are planted and harvested with a large array of capital and energy-intensive equipment, to produce standardized products, most of which were unknown a generation or two ago. As the price of oil goes up, the price of food must follow. Nor can most farmers return to pre-petrochemical days, as they have destroyed their own soil, and it will take years to get it back. We do not have machinery for making soil; that comes in God’s own time with man’s own care. And if we don’t care, it won’t happen.