Trending Now
You are at:Home»Columnists»Wiping the Slate Clean
By Marge Fenelon on August 15, 2011 Columnists, Featured, Live in Christ 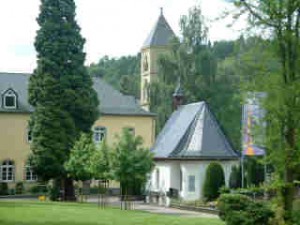 The other day, I wiped the slate clean. Literally.

In our prayer corner, we have a gray slate shingle that once belonged to the roof of the original Schoenstatt Marian shrine, the founding place of the International Schoenstatt Movement in Schoenstatt, Germany, by Father Joseph Kentenich in 1914. Some years back, local movement members salvaged the old shingles when the shrine was given a much-needed new roof. Our shingle was given to us as a gift by some dear German friends who are members of the Schoenstatt Movement, just as my husband and I. It’s an important reminder to us of our roots and a meaningful link between the original shrine and our prayer corner, which we call a home shrine, because we’ve enthroned the Blessed Mother there in the tradition of the Schoenstatt Movement.

While the shingle isn’t part of the original roof (the Schoenstatt Shrine, a former cemetery chapel, was built in the 1100s), it is the better part of a century old, with cracks, crevices, and chips throughout. To most people, it probably looks like a shabby old piece of flat stone. To me, it’s a piece of my heritage, with each crack, crevice, and chip signaling an event, person or milestone that contributed to the history of the movement. Its presence in our home shrine reminds me that one day, I’ll be one of those cracks or crevices – a person long gone and likely forgotten, but who somehow contributed to the history of Schoenstatt.

We had just finished painting the walls of our dining room – the room in which we enthroned our Blessed Mother – and I wanted to clean and polish everything before reassembling the home shrine. I held the slate under the kitchen faucet, letting the warm water gently flow over it, swooshing over it with my sponge. Then I laid the slate on a towel to dry.

“There!” I signed with pleasure. “That’s that.”

I finished cleaning the rest of the home shrine items and set them aside. Then I went to retrieve the slate from the kitchen counter. It looked as dirty as it had been before I washed it!

I grunted in disgust, “Fine. I’ll wash you again, you nasty thing.”

I repeated the cleaning process, this time adding a couple drops of dish soap to my sponge and wiping with a little more vigor and deliberation. When I came back to re-examine it later, I saw that it was better, but still not completely clean. Stubborn, grimy dust still was nestled into the deepest part of each crack, crevice and chip.

“Argh!” I seethed, wanting to get on with the rest of my day.

I took the sponge, added a bit more soap this time, and meticulously wedged the corner of the sponge into each dust-laden corner of the slate, matching edge to edge and making sure I had just the right angle on the sponge. As I worked, I began to chuckle to myself.

As I continued to work, my pun started to sink in. It occurred to me that I have a lot of “slates” in my life; people and situations that became marred by the grimy dust of misunderstandings, misjudgments, misinterpretations, or even just stupid mistakes. Some of that dust was light enough to be swished away with little effort, or at least it was easier to fool myself into thinking it was gone. Some of it nestled deep enough to require serious wedging from just the right angle and with an extra dose of soap. On first pass, I’d think – I’d hoped – I’d swooshed it all clean, only to later discover that much of it remained, still caught in the cracks and crevices. Then I’d have to go over it again, this time digging deeper and with more care. I’d to go back and right the wrongs, or admit that there are some wrongs that can never be righted completely but must simply be let go.

Now the shrine roof slate has a new meaning for me. It reminds me that, no matter how much I’d prefer to wipe the slate clean in one swift pass, often I have to get out the soap – God’s grace and mercy – and go over those cracks and crevices with greater vigor and deliberation. Prayer, the Sacraments, and surrender to God’s will can help me to match the sponge – my humility – edge for edge, making sure I have just the right angle. Then I’ll have wiped the slate clean.