Trending Now
You are at:Home»Business & Work»Working Women: Secular Jobs as Inconveniences or Callings?
By Amy Bonaccorso on March 25, 2013 Business & Work, Featured, On the Job 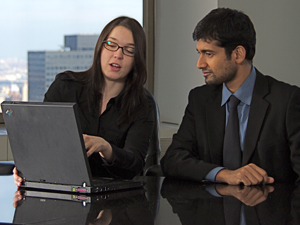 The day finally came when it was time to pack up the majority of my office suits. They used to be so important to my daily life that they had the privilege of living in their very own closet.

But I recently resigned from my decade-long government career, am hugely pregnant, and focused on my coaching business and writing projects now. I have a chance to create the life I want and follow my inspirations. At the same time, I can’t help but reflect on what Catholic women face when they work in secular office environments.

My life as a ladder climbing “government gypsy” meant that I didn’t quite fit into the popular Catholic woman’s paradigm. My perception was that a woman needed to be married with kids and tied to her nest to really qualify as a full on Catholic woman. Well, I’m about to fit more into that mold than ever before, but what if you don’t fit in?

You have to figure out how to maintain your Catholic identity in the work world, which can be challenging. It’s easier if you work for a Catholic organization or non-profit, but in my case, it was office work without any religious connotations for 10 years. I think I was both professional and unapologetic about my faith, but it didn’t feel like a common path.

At times, I deflected comments from other Catholic women who were suspicious of my business acumen, childless status and big paycheck. The fact that it could have been God’s Will for me didn’t initially occur to them. They seemed to suspect my lifestyle was a result of selfish indulgence.

I couldn’t help but notice that some traditional sorts seemed surprised that I had my own opinions and was capable of accomplishing what maybe they only saw their fathers do in 1960s America. Perhaps a petite frame and long hair don’t suggest “achievement” to a lot of people still? That was equally troubling.

On the other side of the coin, some who were committed to the cube farm seemed a little shocked by my decision to leave and suspected that it would not stick.

Regardless, the movie screen in my head always showed me attaining a senior rank and leaving to put baby first. And while I couldn’t have planned everything even if I’d tried – that vision became reality. Except for one thing…

I thought that I’d probably see my secular jobs as necessary evils on my road to motherhood that would serve no benefit after baby arrived. I got sucked into the idea that my career was somehow irrelevant to my identity and calling as a Catholic woman. I’ve found this to be untrue.

As I packed my suits, I realized that I’m lucky. Many co-workers along the way didn’t share my worldview, but were also highly functional and possibly friendly people. As a consequence, I am more mindful of polarized thinking than I was before my office jobs. At the same time, I know what’s “out there” and how hard it is to balance family and work, so I don’t take my transition to a home-based business for granted.

Secular jobs can be inconveniences, but they can also be important steps in our lives that are more closely aligned to callings. They may help us fulfill our life purpose. As St. Catherine of Siena said, “Be who God meant you to be and you will set the world on fire.”