Trending Now
You are at:Home»Featured»Youthful Joy
By Vince DePalma on April 2, 2011 Featured, Live in Christ 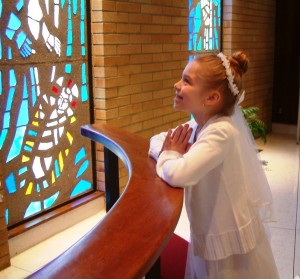 “Ad Deum qui laetificat juventutem meam.” I memorized those Latin words when I was in first grade. Yes, in first grade. I was 6 ½ years old. Those were the first words spoken by an altarboy in response to the priest’s opening words of the Mass. The priest would make the sign of the Cross and then say, “Introibo ad altare Dei.” Translated, the priest would say, “I will go to the altar of God,” and my memorized response was, “To God, who giveth joy to my youth.” But of course it was always in the beautiful yet meaningless sounds of my Latin:

I am now almost 57 years old. For 50 years I have not forgotten those Latin sounds. Phonetically, “Ahd Day’oom quee lay-tee’fee-cott yoo-ven-too’tem may’ahm.” I have always enjoyed saying them, but it was not until a few years ago that I came to understand the literal meaning. It was on a December 28th when my father-in-law passed away. With my mother-in-law and wife present I spoke those Latin sounds to the attending priest. The priest immediately perked up, turned, and looked into my eyes because he knew the Latin. He smiled and told us the meaning: “To God, who gives joy to my youth.”

My late mother, bless her heart, never would allow me to just say “the Mass.” It did not sound reverent enough, I suppose. If she were here to read the above paragraphs, she would carefully correct me, “Vincent, it is the Holy Sacrifice of the Mass, not the mass.” Now that’s Roman Catholic! Evidently, it did not matter that I might have been thinking capital “M” when I said, “the Mass.” Mother wanted to make sure I was a good, God-fearing boy who spoke and thought within the proper ontological framework. I understood what she meant. For ultimately I believed as she did. It was through faith in Jesus presented in this Mass that we went to God for youthful joy and so much more.

The important thing here prevailing through any questioned reverence for the Mass and prevailing through the years of memorized Latin sounds is the fact that I have never forgotten the youthful joy God has given me. Or if ever have, God was faithful to remind me of it. The meaning in those Latin words (found also in Psalm 43:4) is real. The joy is real. Youthful joy’s source has faithfully endured throughout the years and through the darkest of nights. Scripture proclaims, “The joy of the Lord is my strength,” and “Joy cometh in the morning.”

I began writing this at 5:30a.m. sitting here by the fireplace at our vacation home. Two sentences into it, my son Joseph (7 years old) was somehow awakened and found me. He snuggled up next to me. I put down my pen. He asked me if it was still nighttime or morning. I kissed him, and told him how precious he was, and I answered his question by telling him that it was “almost morning.” He wanted to know what I was doing, and I told him about how I memorized “ad Deum qui laetificat juventutem meam” as a first grader. I told him what the words meant. “To God, who gives joy to my youth.” He quietly listened and of course understood I was talking about God. I asked him, “Do you know what joy is?” “What is it?” he responded with his face half-buried in my chest. I then said to Joseph, “Look into my eyes.”

Joseph smiled brightly in return, gave me hug, and said he was going back to bed. I was glad because, in more than one way, he enabled me to finish writing to you on youthful joy.

Vince DePalma is a Christian ecumenical writer. A baptized and confirmed Roman Catholic, he suffered a broken family at age 15 and lived with a Protestant foster family until graduation from high school. Vince attended Bucknell University, the Jesuit School of Theology, and Golden Gate Theological Seminary. He was Director of Christian Social Ministries in Seattle, for which he received commendation from President Ronald Reagan, and was a minister in the National Parks System when he met his wife of 23 years, Patricia. They have three children, Victoria 22, Rebecca 17, and Joseph 10. Email address is vjdepalma@gmail.com