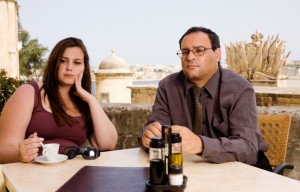 (author’s note: the following story is an adaptation of a short story by Ernest Hemingway entitled “Hills Like White Elephants.”)

They sit quietly together in their house. He has a beer; she has nothing. A look passes from man to woman.

“I don’t see why you’re upset baby. You seemed fine with it yesterday.”

“That was yesterday,” she says silently.

“Pay for it? Like you paid for that beer?”

“You were going out; I thought you could do me a favor.”

“Really, what are you so upset about? Its just a simple operation.”

“Its not simple, ok? Do you know what could happen if those doctors screw up?”

“And how do you know that, huh? Have you been there before? Do you go and watch these every day or what?”

“Its really nothing big. It’s common practice nowadays, standard you might say.”

“Yeah, so fifty years ago some paranoid religious nuts thought a harmless operation was evil.”

“Look, you really want medical advice from some old hack in another freaking country?”

“He probably doesn’t even know what it is. Just another old hack job.”

“My friend Sara said it was bad too.”

“Sara, who never broke a rule in her life? She thinks breathing wrong is evil. Besides, do you really want advice from your one friend who didn’t approve of us moving in together?”

“We’ve discussed that. She’s a little old fashioned, that’s all.”

“Um, and I believe, getting back to the point, we’ve discussed the operation before, and you were all for it.”

“But that was before I…”

“What? Got cold feet? Look, there is nothing wrong with the operation, ok? They’re just gonna take it out and you’ll be fine. No problems.”

“How long will it take,” she whispers.

“I’m sure it will be over soon enough.”

A pause: she inhales.

He sits again at that same table, some time later; she enters.

“Hey honey,” he says with some life.

“I was just gonna ask you something.”

Her coffee mug crashes as it hits the floor. The room is still for a moment.

“Don’t call it that. I don’t want to talk about that.”

“Are you feeling ok honey?”

“Are you sure? Do you need any help…”

She throws out the broken mug.

“Are we doing anything special today? Maybe tonight?”

He leaves her there, standing in front of an empty table, rubbing her left hand, bare and cold.

“Love you too,” she says slightly.

He enters his office; there is a woman waiting for him.

“We need to talk.” She is insistent.

“Um,” and she whispers in his ear. No one heard.

With a smile, a wink, a touch of the hand, and she walks away. He watches her sway out the door, and then picks up the phone. It rings twice.

“Hey honey. I’m here at work. Yeah. Ok. I’ll call you when I get off, but it might not be until after seven or so. Its kinda crazy here. Ok? Ok. Bye.”