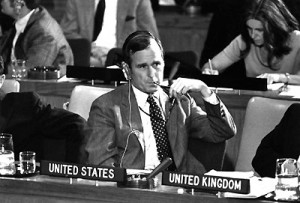 Future U.S. president George H.W. Bush in 1971, at the start of his U.N. ambassadorship.

If Franklin D. Roosevelt and his wife Eleanor were the naïfs who foisted the United Nations on the world, George H. W. Bush was responsible for its revival as a political force.

From about 1950 to 1990, the United Nations Security Council was essentially toothless, as the Soviet and U.S. governments disagreed on issue after issue. As a result, anyone wanting to get things done generally by-passed this forum, from the Berlin problem to the Vietnam War to Arab-Israeli negotiations.

The Iraqi invasion of Kuwait in August 1990 constituted the first post-Cold War crisis. The great powers could have handled it any number of ways – in NATO, with a “coalition of the willing,” or with a new organization – but Bush (himself a former U.S. ambassador to the UN) took the matter to the Security Council for decision making.

I opposed this decision at the time, seeing it as investing unwonted authority that would long outlast the Kuwait crisis in a morally decadent and politically hostile institution. Indeed, Bush’s action had this effect – and we live with the rueful consequences today. UNSC votes on Iraq, Libya, and Syria have had a major impact, permitting a semi-despotism in Moscow and a full-scale one in Peking to exert a major influence on the decisions of democratic states.

(1) A bipartisan folly: a Democrat founded the organization and a Republican turned it into today’s powerhouse.

(2) Counter-history: the 2003 invasion of Iraq would likely have turned out very differently if not for the UNSC.

(3) Another Bush: George W. Bush built on his father’s mistake by begging the UNSC for resolution after resolution on the Iraq issue.

(4) Syria: It is particularly painful to watch the weight of vetoes by the Russian and Chinese governments of a resolution calling on the Syrian president to leave office. How can the democracies allow dictators protecting their own to stymie their own policy?

(5) The future: presumably, only an American president can dismiss the UNSC and transfer its authority to an organization of only democratically-elected governments. Republican candidates are good on this issue while Barack Obama will imbue the UNSC with yet more power.