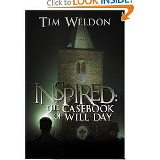 An Excerpt from “Inspired: the Case Book of Will Day”

It was a Sunday morning and just before dawn. From the first floor of The Old Harbor
Gallery, I stood listening and watching beyond the elegant silhouette of the curator and
through the forty foot windows. From the eponymously named Cliff’s Edge Lighthouse, the
slow rotation of a light filled the gallery and the inlet shoreline of Lake Superior.

The gallery went nearly dark again. I turned around. The sinewy Hilda Redge, enfolded
in a black turtleneck cape, wanted my full attention.

“And our missing painting jumps that number, of course.”

I was admonished with a haughty tsk as we looked over to the now empty paneled wall
near the museum’s entrance. A dusty, six by nine outline newly supplanted the place of Horace
Pendergruff’s “Winter Light.”

“Money and beauty form a crass coupling, Mr. Day.” She held a finger to her chin. “Still,
you will find the painting.”

I grinned and quoted her double my old fee. St. Killian’s could use the money for their
annual Christmas charity drives.

“”Done. My part, that is.” She walked over with a retainer in hand. “Chief Larsson says
that you come with the highest of recommendations: the recovery of Don Reynosa’s ‘A Rapt St.
Agnes’ for a Boston museum and Hetzger’s ‘Autumn Clear’ for a Pittsburgh gallery. With us,
you’ll exceed his recommendation, I’m sure.”

She stepped back into the darkness.

“And the police didn’t take the case, because…”

“Beauty’s underappreciation is part of its legacy.”

“That, Chief Larsson has.” She stepped even further back, stopping before another high
window that walled the gallery. She turned her back to face the lake. “Now if you don’t mind, I
find daybreak to be a sight unrivaled, an exhilarating sensual-”

The Volvo was in the shop, its second home, and I decided against a taxi. A long walk
home from the tony end of the lake front, and in the winter wind, could only quicken analysis.

December’s promise of snow had not been kept. Making my way through lonely
streets, I concluded the bare concrete and brown lawns were false accommodation for
the Christmas season. Brown grass and LED lights spoke too loudly of the times. The theft
of “Winter Light,” cinched the hollowness of the secular. The mural-sized canvas, by one of
America’s renowned “frontier artists,” translated the story of Joseph and Mary and the first
Christmas into rural nineteenth century, Middle West America, with a fur-wearing trapper
playing the part of Joseph and his blanketed, expectant wife atop horseback, Mary. Surrounded
by snow at the forest’s edge, the family stood in fixed mutual gaze upon a small church in the
starlit horizon. A single, golden light from the solitary church window bid refuge and more.

“Who could steal such a painting?”

Inspired: The Case Book of Will Day by Tim Welton is available at Amazon.com.