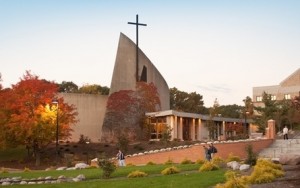 Catholic religious leaders have warned that religious institutions may be forced to stop providing health care coverage if the Department of Health and Human Services does not change its mandate to provide contraceptives, including abortifacients, as part of their health care plans. Yeseterday, the first Catholic university has followed through by dropping its health care plan for students.

The Franciscan University of Steubenville announced it will not furnish students with health care coverage effective this fall, specifically citing the HHS mandate as the reason.

“The Obama Administration has mandated that all health insurance plans must cover ‘women’s health services’ including contraception, sterilization, and abortion-causing medications as part of the Patient Protection and Affordable Care Act (PPACA),” a statement posted on its website states. “Up to this time, Franciscan University has specifically excluded these services and products from its student health insurance policy, and we will not participate in a plan that requires us to violate the consistent teachings of the Catholic Church on the sacredness of human life.

The rising premiums that attend a greater government role in health care were another reason for the cancellation. “Additionally, the PPACA increased the mandated maximum coverage amount for student policies to $100,000 for the 2012-13 school year, which would effectively double your premium cost for the policy in fall 2012, with the expectation of further increases in the future,” the statement said.

The college located in eastern Ohio, which is ranked one of the best private college values by Kiplinger, noted its current student health insurance plan will expire on August 15.

On September 29 the university was one of 18 Catholic colleges to write a letter asking the Obama administration to rewrite the mandate, noting they were “being forced to choose between offering such coverage, paying a fine, or offering no coverage at all.”

An employee of the university, Tom Crowe, wrote his employer’s message was brisk and clear: “We. Will. Not. Comply. And our students are the first one who will feel the pinch.” He added that the university is not self-insuring and would not have been exempt from the mandate, adding such an exemption exists “on paper only.”

Catholics universities are not the only religious institutions poised to take drastic action as a result of the Obama administration’s abortifacient decree.

If these hospitals closed it would create a supply shortage, with the likely effect being government programs will be forced to pick up the slack.

South Carolina Congressman Trey Gowdy said at a House Oversight Hearing on February 16 that closing religious hospitals and schools, or forcing them to end health care coverage, “means government is gonna get bigger, because they’re going to have to fill the void…and maybe that’s what they wanted all along.”