Trending Now
You are at:Home»Featured»Good and Bad News from Catholics in India
By ACN-USA News on September 7, 2011 Featured, Those in Need 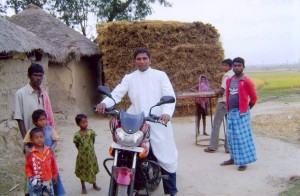 “We are a growing Church, and each year around 1000 people find their way to the Faith.” This was the report of a bishop from India during a visit to international Catholic pastoral charity Aid to the Church in Need (ACN).

Bishop Cyprian Monis, from the Diocese of Asansol in West Bengal, on the eastern side of the Indian subcontinent, told ACN that the number of Catholics there has almost doubled since the diocese was founded in 1997, while the number of priests has tripled.

Today his diocese has a total of 29,000 Catholics, including 230 religious and 44 priests. The diocese also runs 7 primary schools and 8 secondary schools.

Their mission is clearly set out: Catholics are to “prove themselves in word and deed as true disciples of Christ,” as it says in one of the diocesan programs.

The diocese shares its name with the industrial city of Asansol, which numbers around half a million people. It is situated roughly 140 miles northwest of Calcutta, the capital of West Bengal, itself one of the most densely populated states in India, with over 90 million people in an area a quarter the size of Germany

Asansol is dominated by coal mining, iron and steel production and by the textile industry. Good roads linking it with Calcutta are also allowing the town to grow rapidly.

Catholics make up only a tiny minority in the region where roughly three quarters of the inhabitants of are Hindus and another quarter are Muslims.

Among the issues of particular importance to the diocese are the instruction in the faith of the local rural population and the various programs of education and vocational training, such as the teaching of better methods of agriculture and improved healthcare programs. 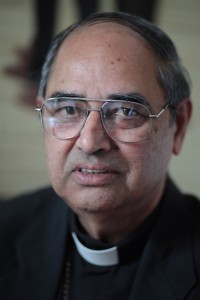 As Bishop Monis remarks, “We are starting from scratch with everything, in fact. We need churches, parish and social centers, schools… in short, everything.”

ACN is helping the further development of the diocese, since the Catholic faithful themselves can contribute little. The majority are simple peasant farmers living in the most basic conditions who must pay tithes of a part of their crop to large landowners.

Nevertheless, as Bishop Cyprian points out, the collaboration of the laity is essential for the development of the diocese, whether women or men, young or old.

According to the bishop, the laity must be encouraged to live their faith in an exemplary manner. In their everyday life they encounter many non-Christians, and so they should bear witness to what a life lived in a spirit of Christian solidarity really means.

Bishop Cyprian believes it is vital to support and strengthen the laity, “so that they can feel that they are Church.” He hopes to achieve this through regular educational courses, especially for catechists, parish leaders, women’s groups and young people.

He also encourages the faithful to become involved politically.

So far Catholics in Asansol have not had to face the hostility and oppression suffered by many in other parts of India. The various religious communities manage live peacefully together, and Bishop Cyprian emphasized that he regularly and gladly accepts invitations to meetings with those of other faiths.

[In an example of this hostility a] Catholic church in India that has been repeatedly vandalized was once again desecrated at the end of August. 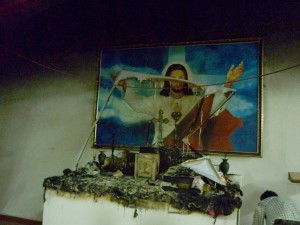 On repeated occasions, the Syro-Malankara Catholic Mother Mary Church of Hyderabad has been subjected to acts of vandalism. In the latest incident, the main altar as well as bibles, mass and song books, crucifixes and liturgical gowns were set on fire.

The parish priest, Father John Felix, wrote in an open letter to the authorities of the State of Andhra Pradesh that such an incident could only occur “on account of the inactivity and neglect of the police and other authorities.”

In the letter, which was made available to international Catholic pastoral charity Aid to the Church in Need (ACN), the priest complained that proceedings relating to attacks perpetrated in the years 2004 and 2008 have been closed by the police with no action being taken.

In July 2004, parishioners, including a priest, who were working on the building site where the church was being constructed, were physically attacked by a mob of some 100 people who abused them and threatened to kill them.

In July 2008, the doors of the church, which had been completed in 2006, were locked from the outside during a service, although close to 250 faithful were in the building, including infants, as well as aged and sick people.

“In order to avoid further conflicts, we followed the teachings of our Lord Jesus Christ, i.e. we practiced forgiveness and love of enemies,” the parish priest emphasized.

But he called on the authorities to reopen the past proceedings and to investigate the latest incident, because the congregation was “under constant threat.”

In reply to an enquiry from ACN, the responsible Bishop, Jacob Mar Barnabas, explained that the church is currently under police protection, but that the parish intends to repair the damage as quickly as possible.

He called on Catholics throughout the world to pray for his flock, because there are “people in the district who do not want to have the church here.”

As an Eastern Catholic Church, the Syro-Malankara Church in India is in full communion with the Holy See. It has some 430,000 faithful.