The Libya situation is complicated. I envy no president stuck with the task. Among the complexities, the most daunting unknown is what’s behind the opposition. We would all like to see Moammar Gaddafi tossed to the ash-heap of history, but the rub is who, or what, would replace him. What a tragedy it would be if America intervened only to see Gaddafi replaced by an Ayatollah.

President Obama has a tough situation in Libya. I was more certain about what to do with Saddam, in 1990-91 and 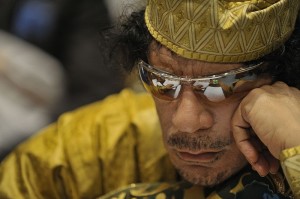 That said, it’s disappointing to see liberals rally behind Obama in Libya in a way they refused under the Bushes in Iraq. I won’t go through all the maddening double standards, but there are two that really struck me after President Obama’s speech on Libya, and seem to mount by the minute, namely: coalition size and cost.

President Obama stressed that America has not “acted alone” in Libya, and is joined by a “broad coalition,” a “strong and growing coalition.” He named 11 countries: the United Kingdom, France, Canada, Denmark, Norway, Italy, Spain, Greece, Turkey, Qatar, and the United Arab Emirates.

Now, these were two areas—coalition and cost—where the American Left vilified both Bushes, especially George W. Bush, literally accusing him of acting “unilaterally” in Iraq in 2003. The accusations were outrageously, irresponsibly absurd. And yet, when comparing Obama to the Bushes here, Obama falls way short.

For the first Gulf War, George H. W. Bush assembled a multinational coalition that (depending on varying sources), ranged from 27-34 nations, with as high as one-third of troops stationed in the Persian Gulf by December 18, 1990 provided by U.S. allies. Also contributing were 11 Middle East Muslim nations—they alone equaled the total of President Obama’s current coalition partners—and even members of the still-existing Soviet Warsaw Pact.

The vast majority of the costs were provided by U.S. allies, especially Kuwait, Japan, and Germany. A March 2003 Associated Press analysis determined that the Gulf War initially cost the United States $61 billion, with all but $7 billion reimbursed by allies with cash or other contributions like fuel.

For the record, other accounts have been more generous, claiming Uncle Sam was reimbursed entirely.

As for the Iraq War in 2003, that, no doubt, was far more costly. The Bush team had a handle on initial costs; costs rose not with the initial invasion, which went far better than planned, but with the nasty occupation and reconstruction that followed.

Yet, one aspect of the 2003 war that again far surpasses Obama’s work in Libya is the coalition George W. Bush put together.

Remarkably, by March 18, 2003, Secretary of State Colin Powell announced a coalition of 30 to 45 nations. That number depended on the form of support, which ranged from a vocal 30 nations to a discreet 15 nations, the latter largely Arab. This Bush coalition was one of the biggest in history. Such a multilateral stamp of approval was precisely what critics had clamored for, and Bush delivered. It even included Afghanistan, a nation once run by the Taliban, and once Osama Bin Laden’s home.

And yet, rather than commend the Bush team, Democratic Congressmen like Lloyd Doggett ridiculed the coalition. He sneered that “the posse announced today is mighty weak.” It included “such military powerhouses as Eritrea and Estonia,” two nations the administration considered a sign of the worldwide opposition to Saddam. The coalition, said Doggett, was “embarrassing” and signaled a “foreign policy failure.”

The day after Powell announced the vast coalition, Thomas Friedman wrote in the New York Times: “We’re riding into Baghdad pretty much alone and hoping to round up a posse after we get there.”

The frustrated president said repeatedly that the coalition was multinational, but to critics it didn’t matter.

Nonetheless, these are facts. In both cases, the Bush coalitions were far superior to President Obama’s in Libya.

Frankly, that doesn’t matter much to me. I supported President Reagan’s unilateral run on Tripoli in April 1986. This multilateral thing isn’t my standard.

But it is the standard of the American Left; or at least when the Bushes are in charge.

And as I kept reminding my liberal friends when the Bushes were in charge: be careful about the standards you’re demanding to demonize the Republican president, because someday your guys will be back in charge.