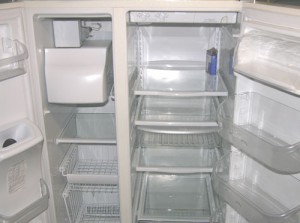 Blame it on another quirky “holiday” – in case you missed it, “Clean Out Your Refrigerator Day” was November 15th.   All I know is one minute I was praying to the light at the rear of the dark tunnel for dinner inspiration and the next minute I was waist deep in seven half-empty mustard jars.  I should’ve never opened that refrigerator door.

When I attempted to move the mayonnaise aside it stuck to the glass shelf…. perhaps that’s what made me start cleaning. I pried off the jar, grabbed a rag and attacked the ring of sticky goo.  Except the ring became a river and I had to empty half the shelf to get it all.  At that point, I figured I might as well remove the shelf and wash it in the sink.  It’s a lot easier to reach that way, but mainly I feared easing too deep into the fridge lest my kids shove and lock me in until I promised them ice cream for breakfast.

With the shelf removed, all sorts of pretty drips and spatters became visible on the interior walls.  I filled the sink with fresh, hot sudsy water and got out the heavy-duty scrubber sponge.  What was that stuff and how long was it there? I did some calculating…we were in our old house…it was getting replumbed…the kids were old enough to tell the plumber embarrassing family habits…we still had our old dog because I remember him peeing on the plumber’s new truck…Right.  We bought this fridge six years ago.

The remnants of the bright yellow Energy Efficiency Rating label were still stuck inside.  Today was as good as any to remove them.   My heavy-duty scrubber sponge gummed up in one swipe.  I got out the Goo Gone.  It made the kitchen smell citrus fresh but didn’t cut all the way through the adhesive.  I shouted out from the cavern, “Hey kids, bring mommy a razor blade, would ya?”  I heard them dial the phone.  “Dad, remember that time you told us to tell you if mom started playing with sharp objects again?”

Scott made it home in record time but the damage had been done.  Each crisper drawer had been removed, scrubbed inside and out and lined with fresh white paper towels.  The door shelves had been disassembled, cleaned, dried and replaced.  The condiments were arranged by color and bottle size. The remaining mold-free leftovers were on the counter as “dinner”, adjacent to a paper towel where I’d scrawled, “Column In Progress: Do Not Disturb!” On it rested my refrigerator treasures: razor blade, dehydrated spinach, dog hair, brittle rubber bands, a marble, sock, plastic rectangle with the words, “Use one N battery” and a carton of whipping cream stamped, “Best used by 12/22/03”.

Scott looked at the kids and dogs cowering in the corner then to the counter.

“Honey,” he said wrapping his arms around me, “You should’ve never opened that door.”