Trending Now
You are at:Home»Learn & Live the Faith»Those in Need»Rebuilding the Church in Haiti
By ACN-USA News on February 25, 2011 Those in Need

A Haitian bishop has spoken about his plans to rebuild both his earthquake-shattered cathedral and the broken lives of the people in his diocese.

Speaking during a visit to the international headquarters of Catholic charity Aid to the Church in Need (ACN), Bishop Launay Saturné of Jacmel described his calling to bring the love of God to a shattered country

Bishop Saturné said, “The fact that I survived the earthquake shows me that God still needs me and that I have a mission to fulfill.”

“As shepherd of my diocese, I tell people who have lost everything, that even if everything else has gone, God has still spared our lives.”

“With them we have the duty to work for a more humane, more reconciled world and for a better future.”

Part of his plan involves rebuilding his cathedral, which was severely damaged in the earthquake of January 2010. The bishop explained it was a “symbolic place” and “a place of unity.”

Until now the faithful have continued to gather to worship in a tent, but he is hoping that the Diocese of Jacmel – which was the hardest hit after Port-au-Prince in the earthquake of January 12th, 2010 – will soon find a site for a new cathedral.

Several other churches and Church properties were either destroyed or severely damaged by the quake and will also need to be rebuilt.

ACN is committed to supporting the Church’s plans to rebuild the national seminary, churches and convents.

However, the 47-year-old bishop, who has only been in office since May 2010, emphasized physical rebuilding is not everything.

He said there could be “no rebuilding without mission, without evangelization, without prayer, without the proclamation of the Word of God.” 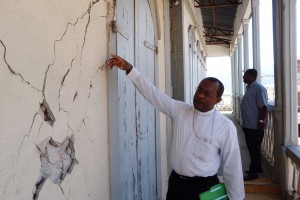 Although the earthquake had destroyed everything, he described how it had given Catholics, Protestants and members of other faith communities an “all-embracing brotherliness and solidarity.”

The bishop added that the disaster had brought Haiti closer to God and shown people that “the things of this world are very fragile.”

He expressed his thanks to ACN’s benefactors who “showed such solidarity in the darkest hours of Haitian history” and expressed the hope that “the attention focused on the Church in Haiti will continue, so that this terrible catastrophe for Haiti will be an opportunity for rebirth and a new departure.”

ACN recently gave grants for projects including repairs to a school for prospective seminarians in Cap-Haitien and a new roof for St Joseph’s Church in Port-de-Paix, as well as Mass stipends for priests across the country.

A further $65,400 has gone towards repairs to a religious sisters’ convent, which is temporarily home to more than 50 Sisters after the congregation lost most of its houses in Port-au-Prince.

The Diocese of Jacmel, in the southeast of Haiti, covers a region of more than 1,000 square miles and has a population of almost 530,000, of whom 65 percent are Catholic.