Al Mohler absolutely dismantles Nicholas Kristof in this new piece. The cause of this skewering? Kristof’s “Beyond Pelvic Politics” column in The New York Times.

After asking his most pressing question, “After all, do we really want to make accommodations across the range of faith?,” he makes this amazing statement:

“The basic principle of American life is that we try to respect religious beliefs, and accommodate them where we can.”

That sentence caught the immediate attention of many. Could someone of Nicholas Kristof’s influence and stature really write and mean that?

Mohler highlights some of Kristof’s commendable work on human rights abuses (he’s the recipient of two Pulitzer Prizes), but Mohler says “when it comes to human rights at home, Mr. Kristof reveals a horrifying blind spot.” 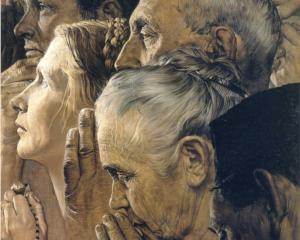 Our country is not a country that “accommodates” or “tolerates” religion. There is undoubtedly a growing disconnect of those who have no fundamental understanding of the meaning of religious liberty in the American framework. Now we are clearly seeing that the exponential growth of government is a grave threat to religious liberty. Some of the “enlightened” want to somehow “accommodate” religion, at least publicly.

Face it, many who no longer look to the Lord for their help, look to the state as their provider, caretaker, and the dispenser of whatever freedoms they are granted.

Concerning our fortress of religious liberty, look no further than a book I recently reviewed on James Madison by Richard Brookhiser. Madison objected to the “fullest toleration” of religious freedom in Virginia’s Declaration of Rights, and his language found its way into the Bill of Rights. Brookhiser spells it out perfectly in his Madison biography and points to the uniqueness of America’s first freedom:

Madison, half Mason’s age, improved his language, proposing a crucial change to the clause on religious liberty. Mason’s draft, reflecting a hundred years of liberal thought going back to John Locke, called for “the fullest toleration in the exercise of religion.” Yet this did not seem liberal enough for Madison. Toleration implies those who tolerate: superiors who grant freedom to others. But who can be trusted to pass judgments, even if the judgment is to live and let live? Judges may change their minds. The Anglican establishment of Virginia, compared with established churches in other colonies, had been fairly tolerant – except when it hadn’t, and then it made water in Baptists’ faces. So Madison prepared an amendment. “All men are equally entitled to the full and free exercise” of religion. No one could be said to allow men to worship as they wished; they worshipped as they wished because it was their right as men. Madison’s language shifted the ground of religious liberty from a tolerant society or state, to human nature, and lifted the Declaration of Rights from an event in Virginia history to a landmark of world intellectual history (23, 24).

Furthermore, take a look at “Birth Control Yes, Government Control No” in The Wall Street Journal for more on the threat to religious liberty.

Toleration or accommodation is of course flawed because it posits the notion that religious freedom or freedom of conscious is offered by the whims of the state. Many pundits rolled their eyes at the “war on religion” ad by Rick Perry during his presidential campaign. I admit, I think I rolled my eyes and thought it was quite the overreaction. I was too enlightened and nuanced for an ad like that. Given the actions of the executive branch, I don’t know if we can say it’s an overreaction anymore.