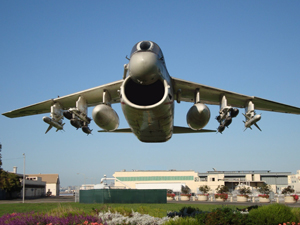 Within days, the Obama Pentagon is expected to decide which supplier to rely upon for what is, arguably, the cornerstone of America’s ability to project power for the next forty years: the next generation aerial refueling tanker known as the KC-X.  The choice for this role – which is worth conservatively $40 billion – would seem to be a no-brainer.  The obvious winning candidate to produce and maintain for decades to come 179 tankers would be a reliable, experienced and responsible U.S. manufacturer, Boeing.

It seems, however, that Team Obama is poised to entrust responsibility for this vital defense capability to a company that has none of those attributes – the European aerospace conglomerate EADS.  The pretext apparently will be that the foreign competitor is offering a lower bid than its American counterpart.

This claim is preposterous on its face.  The Lexington Institute’s Loren Thompson, one of Washington’s most respected defense program and budget analysts, noted recently that each of the two bidders has to satisfy 372 mandatory performance requirements.  “Thus, the key discriminator in who wins becomes price.”  Meeting or substantially undercutting Boeing’s bid is problematic since the Airbus tanker based on the A330 weighs in  28 percent larger with 40 feet more wingspan than Boeing’s derivative of the 767.  “It appears that is exactly what the European company plans to do, raising the obvious question of how such a bid is possible.”

How, indeed?  The answer is not so hard to fathom if you look at the nature of EADS.  As the Center for Security Policy documented in a white paper issued in September 2010 (http://www.centerforsecuritypolicy.org/p18520.xml), the company has relied on devious, unethical and unfair practices to buy-into or otherwise win contracts.  It has then relied upon massive subventions and/or cost-overruns to stay afloat.  For example, last June, the World Trade Organization estimated that EADS garnered some $20 billion in illegal subsidies from its European governmental owners.

Then, there are EAD’s endemic problems with bribery and corruption. Eleven years ago, with the company’s Airbus sales in mind, former Director of Central Intelligence R. James Woolsey told Europeans in an op.ed. in the Wall Street Journal:  “Your companies’ products are often more costly, less technologically advanced or both, than your American competitors’. As a result you bribe a lot.”

In addition, EADS has been under investigation in France for the past five years in connection with alleged insider trading tied, presumably, to the company’s abysmal financial track record.  In early February of this year, the Paris judges said they were focusing the investigation on Daimler.  In particular, EADS’ massive cost-overruns have gotten so bad lately that the German government has scheduled an emergency summit on February 23 to discuss bailing out Daimler, by nationalizing Daimler’s 7.5% stake in EADS.  According to the Financial Times, the EADS losses cost Daimler €231 million in the last year alone.  Is this really the kind of company we want the Pentagon to be keeping?

Here is what U.S. taxpayers can expect in EADS performance. The company’s A400M military transport plane program is surviving only because of a $4.6 billion bailout forced from European taxpayers in November 2010 .  The A400M program was originally to cost $27 billion; a recent study found that final costs could now rise to $44 billion. The program is three-to-four years behind schedule.

It is not easy getting a company with such a dismal past cleared to win what may prove to be the largest Pentagon contract ever.  In January 2010, then-Representative Todd Tiahrt of Kansas wrote in Human Events: “Given the well-known corruption practices by EADS, it would make common sense that it not be awarded Pentagon contracts. In fact, Congress has passed the Foreign Corrupt Practices Act that bars companies who engage in bribery overseas from competing for United States government programs.

“The U.S. Department of Justice has appallingly interpreted the laws to only cover U.S.-based companies – therefore exempting EADS. But it gets worse. The federal government has gone even further and exempted EADS from the Buy American Act, the Berry Amendment, the International Trafficking and Arms Regulations, and the Cost Accounting Standards. Complying with these expensive regulations is mandatory for any American company looking to do business with the Pentagon, but waived for a foreign competitor such as EADS.” (Emphasis added.)

If these considerations were not grounds enough for denying EADS the KC-X contract no matter what price it offers, there are other compelling reasons to have these tankers made in America.  These include: EADS has a highly politicized socialist workforce in Europe, one that has exhibited profoundly anti-U.S. sentiments in the past. Do we really want to rely on such workers in the event their efforts are essential to future combat operations with which they vehemently disagree?

There have also been issues of technology theft and commercial espionage associated with EADS.  With the Kremlin owning a 5% stake in the company, the security implications of such behavior cannot be minimized.

Taken together, the arguments against turning the future of a key determinant of America’s power projection capability over to EADS are compelling.  If the Obama administration persists in its efforts toward that end, it will likely find the Congress less willing to ignore the strategic and economic repercussions of such a step.  That is especially true insofar as doing so would give lie to the universal mantra of politicians on both sides of the aisle to promoting American competitiveness and the need to expand the number of skilled jobs here at home.

Alternatively, the Government Accountability Office may find irregularities in the KC-X award (notably, the Pentagon’s inexplicable sharing with EADS last November of proprietary, competition-sensitive data supplied by Boeing) that once again justify overturning an ill-managed award.

Either way, the real loser will be the servicemen and women who needed a reliable and capable new tanker years ago – and certainly deserve no less now.