Trending Now
You are at:Home»Learn & Live the Faith»Apologetics»Take Me to Church — The Mega-Church, That Is
By Misty on April 16, 2015 Apologetics, Evangelization, Featured, Live in Christ 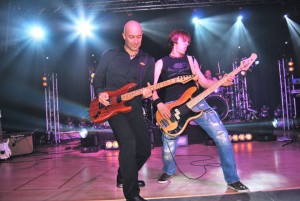 My best female friend is a non-practicing Catholic. Like many lapsed Catholics, she attends Mass twice a year (Christmas and Easter). Though she has no genuine faith, she at least still appreciates Catholicism culturally, which is why she had a Catholic wedding, is supportive of our celibate priests, and ferries her kids to CCD at her local parish so they can receive the sacraments. She grew up in the church, but as she put it, going to Mass was “more of a tradition than anything else, sort of like putting up a Christmas tree.” She was, as the saying goes, “sacramentalized but not evangelized.”

For nearly 13 years, I’ve been trying to gently evangelize my friend. I’ve corrected her erroneous ideas about the faith, prayed and fasted for her, and persistently challenged her to reach out to the Lord. When she’s had negative experiences with more-Catholic-than-the-Pope Catholics, I’ve reminded her that those folks were not representative of the love for neighbor Jesus calls us to. (I’ve reminded her, too, of her own weaknesses.) It’s been a labor of love to encourage her, and because we’re so close, she knows I’d love nothing more than for her to embrace the true heritage she’s been given as a baptized Catholic.

And she may be on the cusp of doing just that. In the past year, she’s started praying, going to Mass occasionally, and reading books about the faith. Earlier this week, she finally approached a local parish priest about joining the community.

During the meeting, the priest complimented my friend on her timing, because the parish is in the process of rejuvenating itself by becoming more “relevant” to modern Americans. How? By following the advice of Rebuilt by Father Michael White, a book that encourages Catholic churches to model themselves after successful Protestant mega-churches.

One of the most important ways the parish plans to become relevant, the priest told my friend, is by changing the lingo of Catholic worship to destroy the negative associations people have with it. So instead of a church with a sanctuary, they’re going to have a “campus” with a “worship space.” The “childcare team” will shuffle your noisy kids off to “Jesus time,” while the “host team” (not ushers) will help you and your spouse find a seat in the “environmental elements” (not pews).

The “worship band” (not the choir) will provide contemporary Christian rock music during the “weekend experience” (not Mass). After the “services,” you can enjoy a latte in the vestibule cafe right outside the worship space. And the best part is, you get all this AND you no longer have to fear God’s “performance review” at the end of your life!

My friend was very taken aback by all this and wanted to know what I thought. So I told her: “It’s great that you’re finally investigating the faith, but please find another church. And stay away from that one, because it’s rotten to the core.”

It sickens me that I have to advise my friend to avoid a Catholic church, especially when she’s finally ready to build a relationship with God. But having experienced the mega-church personally, I know that any parish that models itself after this trend is more likely to destroy my friend’s burgeoning faith than grow it.

Two years ago, I attended my friend’s local mega-church to show my oldest daughter the difference between the Catholic liturgy and this evangelical Protestant service. After depositing my friend’s children in the childcare room, we walked into a gigantic auditorium with multiple movie screens across a large stage, which flashed the lyrics to the very loud Christian rock being played by the praise band on a smaller stage to the right. A few people were singing with their hands in the air, obviously praising God.

At least half of those in attendance were talking to each other, knitting, or on their cell phones (including my friend’s husband). After about 20 minutes, a young man came out and gave a talk about Scripture. During the talk, people continued to talk, knit, or play on their phones. Others were carrying coffee drinks and snacks in from the cafe right outside the auditorium doors. After his 30-minute talk, the band started up again and played for another 15 minutes.

Then my friend stood up and started putting her coat on. “So, what did you think?” she asked, smiling expectantly. I was confused; were we going somewhere else in the building for another activity? Then I realized that everyone was putting on their coats and packing up, because the service was over. I had foolishly been sitting there waiting for the liturgy to start.

This, then, is the model for my friend’s prospective new Catholic home at the “rejuvenated” parish. The mega-church model epitomizes all the wrong reasons to even go to church in the first place. It should go without saying that you shouldn’t be going to church primarily to:

Why go to Mass at all then? Well, how about going to:

Mega-churches may get people in the door, in much the same way a football game in a stadium does. Being at my friend’s church was fun, laid-back, and easy, after all. (And though I didn’t get coffee, I’m sure Leviticus is easier to take while sipping a latte.) But in the end, entertainment will never fill that void in our hearts that longs for genuine relationship with God. At best, it produces a revolving door of church members: sure, you’ll initially attract legions of people, because who doesn’t like the idea of going to a rock concert and coffee bar instead of stodgy old “church?” But you’ll constantly lose members, too.

The people who showed up for all the reasons on the first list will get bored eventually and drift away, while the genuine Truth seekers will leave to search for the sacred holiness their souls yearn for. Well-formed, lasting disciples of Christ can’t be formed through painless consumerism any more than a strong, lasting marriage can be formed by an endless honeymoon. One has to wonder how long the crucifix would last in a Catholic church determined to avoid the mandate to “deny yourself, and take up your cross daily and follow Me.”

Our Lord is like his creatures in one important way: He wants to be loved for himself. He wants us to come to a meal at his house to spend time with him, to get to know him so that hopefully, we will come to love him as passionately as he loves us. He loathes receiving us out of obligation, or having us show up just to show off our membership in his religious country club.

When I think about the Catholic mega-church, I can’t help but think of The Great Gatsby, where thousands of people attended Jay Gatsby’s extravagant summer parties either for fun or to brag about being associated with the millionaire. Meanwhile, most party-goers didn’t even recognize their host when he walked among them. And no one came to seek friendship with the man himself. It almost makes you wonder if the Catholics who consider the person of Jesus Christ an insufficient draw for modern audiences have ever actually met him.

While I do believe Catholic churches need to refine their evangelization approaches (especially for groups like gays and lesbians), marketing Christian discipleship as a commodity to be enjoyed by modern consumers isn’t the answer. May God preserve my friend’s growing faith, and the faith of all Catholics subject to the mega-church trend.