During their brief existence, the Occupy movement has already yielded some benefits on the economic front.  As Fr. Thomas Massaro of Boston College puts it:

My gratitude to the Occupy movement grows directly out of my identification with Catholic social teaching…. In these years of high unemployment, blocked opportunity, crushing debt, anxieties about future economic security and deep doubts about recent economic policy, the United States desperately requires greater attention to the relationship between private gain and public benefits, and to principles like the common good and social responsibility.*

In addition to awakening the nation to what Fr. Massaro calls “the countercultural principle of ‘people over profits,’” Occupy Wall Street achieved some economically measurable results on Bank Transfer Day, 11/5/2011.  In the Puget Sound region, credit unions stayed open for several weekends to handle the huge volume of accounts being transferred to them, and away from the likes of Chase, Wells-Fargo, and Bank of America.  Nationwide, credit unions enjoyed 70 times the usual volume of business. 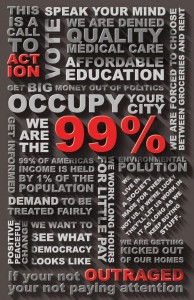 In taking stock of OWS as we move into a new year, there is considerable uncertainty in Church circles about the Occupy movement.  But at this point, I would argue that we have no good reason to boycott the movement, nor to oppose it.  A lot about what I’ve seen in Occupy Seattle is indeed encouraging to me as a Christian and as a practicing Catholic.

During the decades since Leo XIII wrote Rerum Novarum (1891), the Church has eschewed rugged individualism, and has stood in solidarity with mainstream labor movements.  Catholicism has been steadfast against unbridled capitalism.  In the United States during the labor struggles of the 20th century, the Church sponsored priests to serve as labor chaplains, most notably Msgr. John A. Ryan, and Msgr. George Higgins.

In the Pacific Northwest, Catholicism has long been an ally of labor.  Prior to Word War II, Seattle and Portland gave warm receptions to Dorothy Day, who was traveling to promote her Catholic Worker movement.  In her journal, she noted in 1940 that Seattle Bishop Gerald Shaughnessy “takes an active interest in the affairs of the unions in his city.”

Shoehorning Catholicism into the Occupy movement should be all the easier in Seattle insofar as labor is the foremost ally of OS.  Labor enjoys a relatively strong presence here, and most local unions marched in support or in some way lent assistance to Occupy Seattle.  That Catholicism prioritizes labor over capitol has obvious Occupational as well as labor movement implications.

Therefore, I submit that it would be appropriate to seize the opportunity now, while Occupy is in its nascency, and bring the Archdiocese of Seattle openly into solidarity with the 99%.  On average, each of the 194 Roman Catholic dioceses in the United States encompasses four or five local Occupy movements.  How the various Bishops respond could have significant repercussions, both for the Church in America and for the Occupy movement itself.

Principles we hold in common, like our “preferential option for the poor,” draw credibility from the Church by virtue of her steadiness and balance, which rank among the noble qualities of Catholicism in practice.  Our record against class warfare rejects both extremes of the spectrum – from liberation theology and Marxism on the left, to right wing forms of exploitation, such as slavery and utilization of child labor by free market capitalism.  In short, OWS needs balance and therefore needs us.

As Catholics we often recite the Magnificat: “He has put down the mighty from their thrones and exalted the humble; He has filled the hungry with good things, and the rich He has sent empty away” (Luke 1: 52-53.)  But anyone who applies this ethic should keep to the Lord’s timetable, as best we mortals can discern it.  And we should pray for the rich and the powerful, even as we work to oust them from positions of disproportionate and oppressive influence.  In this way believers can contribute stability and spiritual solidity to the mix of ideas circulating in the Occupy movement.

The Catholic approach exhibits constancy and steadiness in defense of the common good, but imperatively not class warfare.  Neither, in my observation, is Occupy Seattle pursuing class warfare, nor advocating a liquidation of the 1%.  What is transpiring here and nationally is, rather, an uprising in self-defense.  If anyone is guilty of waging class warfare, it is the 1% themselves.

Occupiers look to the Constitution’s first three words.  “We the People” are authorized by the Constitution, and by basic principles of democracy, to defend ourselves against the plutocrats, with their armies of lobbyists to purchase legislation.  One Seattle protestor carried a sign that said simply, “I’m here because I can’t afford a politician.”

Big money manipulating democracy to death is political repression of the postmodern kind.  Like despotism in any form, it violates Catholic social doctrine.  Speaking to the German Parliament in September, Pope Benedict noted:

Politics must above all be a striving for justice, or as with the Nazis, the state risks becoming a highly organized band of robbers capable of threatening the whole world and driving it to the edge of the abyss.

Furthermore, OWS is fighting in self-defense against the architects of an elaborate stagecraft, paid for by the 1%, who nullify the principle of the consent of the governed.  The few and the very few have transformed elections into extravaganzas so prohibitively expensive that 99% of the citizens are political ciphers.  We the people have been reduced to the role of crowning winners in brawls between two gargantuan political machines beholden to mega-corporations.  Stockholders in these corporations may well include a significant proportion of foreign nationals. 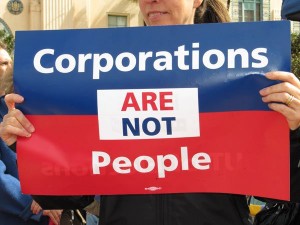 OWS also claims an economic right to self-defense against corporate job-stealers.  Many Americans, including activists in Occupy, see outsourcing as a crime perpetrated in the name of the idol of globalist free-trade.

Furthermore, it would be quite consistent with Catholic teaching on social justice if an uprising were to cast down from their thrones the greedy financiers and fraudulent bankers who play fast and loose with the economy.  As Pope John Paul used to say, “the economy is for people, not people for the economy.” 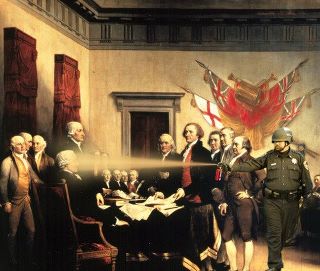 During my time at Occupy Seattle, I’ve encountered – a little surprisingly – quite a few protestors who have not entirely lost faith in the political system demarcated by the written Constitution.  But they do see the system in its practical operation as having been corrupted and warped far in contrast to its original contours.  For example, Justin, a 27 year old college student feels that the current crop of political officials have shown an incapacity to administer the most basic systems of governance.  He hopes people will unite in order to fix the system both locally, nationally and globally.

However some protestors disagree and oppose repair jobs.  “The whole damn system, tear it down,” went one of the chants in NYC during a massive march on Nov. 17th.

Despite the wide variation in worldviews and political outlooks, I think an almost universal expression of what Occupy Seattle wants was articulated on the East Coast by Occupy Boston:  “We have occupied Dewey Square because Wall Street has occupied our government, broken our economic system, divided our country, and negatively impacted our lives for far too long.”

In a somewhat similar vein, without mentioning OWS, Mark Shea, a devout and orthodox columnist for the National Catholic Register, composed a fine piece on December 9th entitled “Ben Franklin’s Warning is our Present Danger.”

Right on, Mark, and power to the people!  Vivat Jesus.