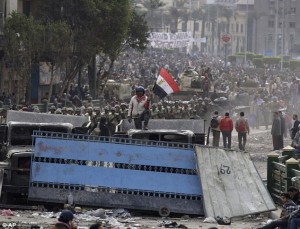 Provocation does carry consequences:  First the Seattle government sent its riot police to drive Occupy Seattle out of its campsite at a downtown park, Westlake Center, and subsequently from its campsite at Central Seattle Community College.

Adapting imaginatively to the new situation, Occupy Seattle took the initiative.  On December 12th, hundreds of marchers barricaded entrances to the city’s port facilities. Using discarded lumber and other materials, they effectively shut down shipping operations at the only two piers operating that day.

In other words, the government provoked a tradeoff.  Instead of tenting on public property, where the effect on business was innocuous or mixed, the city can now look forward to Parisian style barricades impacting Seattle’s seaport.  Great work, Mayor McGinn!  I sometimes marvel at the capacity of officials to foul things up, and then to fend off criticism for bungling.

Riot police themselves seem to have a penchant for provocation in Seattle.  They assaulted two clergymen even as they were mediating as peacemakers. First, the senior pastor at University Temple United Methodist Church, Rev. Rich Lang, was maced directly in the face while wearing his clerical robes (see photo below). Later, during the blockade of Seattle’s Port facility, another United Methodist minister, Rev. John Helmiere, was thrown to the ground, pressed to the pavement, and beaten in the face by an out-of-control cop. 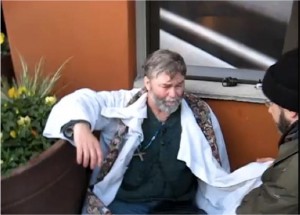 And then there was the 84 year old Dorli Rainey, (whose photo went viral on the internet after Seattle riot police pepper sprayed her).  “I believe change begins in the streets,” wrote Rainey in her blog, “and all citizens have the power to make a difference.”

Street actions are quite compatible with Catholic doctrine.  Lech Walesa and the Solidarity labor union led massive street confrontations in Poland (1989) with the blessing of then Pope John Paul II.

I myself became personally involved with Occupy Seattle while doing investigative journalism for Catholic Lane (see part one and part two in this series).  Before too long I found myself a member as well as an investigator.  Currently I am one of 134 on the Occupy Seattle Tactical Team.  As my own pastor put it in mid-November, “The Catholic Church should support OWS since we are both against greed, and since we both support the little guy.”

My pastor in Bremerton WA, Fr. Derek Lappe, is a brilliant young priest, educated in Rome, and orthodox to the core.  His reflections included the Spanish Civil War, and the reality that associating mainly with the rich got the Church into big trouble during the 1930s, culminating in persecution exceeding what we suffered during the French and Bolshevik Revolutions.  “We need,” said Fr. Lappe, “to help OWS on the principles laid out in the Gospel that move us to action on behalf of the poor,” as well as for pragmatic reasons in order to avert persecution.

Another reason for my own involvement is that so few of the protestors I encountered were Christians.  Most of the activists in OS are, I found, very much products of the postmodern pagan revolution that has been advancing in this country since approximately the assassination of JFK.

To address this situation, I sought and obtained authorization from the Catholic Action Committee of the Knights of Columbus (council 1379) to try and introduce a Catholic presence into Occupy Seattle.  Part of my work was to act as a liaison with Seattle’s several weeks old chapter of the original Protest Chaplains which sprang out of Occupy Boston.  My first initiative was to provide the Occupy Sanctuary tent with a Bible.

Despite the disadvantage of a commute exceeding an hour, I managed to do some shuttle diplomacy that involved Fr. Paul Magnano of Christ our Hope Catholic Church in downtown Seattle.  He was willing to get involved and was introduced to head Occupy Chaplain, Tsukina Blessing, a married young mother gifted with great charm.  She welcomed Fr. Magnano warmly as a new member, and as the first Roman Catholic priest on the Occupy Chaplains list in Seattle.

In mid-November, Occupy New York saw the veteran protestor, 90 year old Fr. Daniel Berrigan, and some Jesuit confreres involved in the massive march to Foley square.  But from the outset, Catholic clergy from the parish or diocesan level have been notably invisible; likewise with Evangelical or conservative Christian denominations.

But Occupy Chaplains in Seattle includes some 50 liberal clergymen, including one Reform Rabbi, some Quakers, about 40 left-leaning Protestants, a Gnostic, a few Wiccans, some Sufi Muslims, and others with whom orthodox Christians and Jews might, shall we say, feel uncomfortable.  It would be an understatement, I think, to say that there is a cultural divide between the Occupiers I’ve met and the people I see at Church on Sunday. 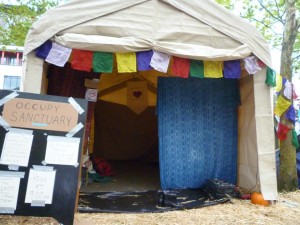 Tsukina told me without equivocation that a plaque displaying the Ten Commandments would be unwelcome to the sanctuary tent.  Inclusiveness is the watchword, said she, and LGBT folks might be put off.  I was also informed that Occupy Chaplains has a policy against proselytizing.

Approaching the sanctuary tent with a gag in one’s mouth reminds me a little of Acts 4:17-20, where the religious authorities in Jerusalem forbade Saints Peter and John to speak about Jesus to anyone.  Against such suppression of religious free speech, however, we have not only the testimony of Sacred Scripture but a statement by the American Bishops.

Our nation is enriched and our tradition of pluralism is enhanced, not threatened, when religious groups contribute their values to public debates.*

And so my challenge was to leaven the movement as best I could, and to uplift its spiritual awareness.  After I introduced Fr. Magnano to Tsukina and three of her fellow chaplains, Father was inspired to mention last October’s papal pilgrimage to Assisi, and the interreligious gathering of Christian and non-Christian clergy, where Pope Benedict prayed for “dialogue among people of different religions.”  Tsukina was obviously delighted.

Hopefully, God will bless Father Magnano with an effective ministry in this kind of environment.  His history of involvement with the Catholic Worker movement cannot hurt.  Also he and all Christians immersed in this milieu need our prayers for protection.  Seeking to improve matters spiritually is not always safe.

Given the level of spirituality in the Occupy movement, Americans who value our Judeo-Christian heritage should be relieved that OWS has yet to produce a manifesto for particular reforms.  Given a predominantly (not exclusively) pagan orientation, it is frightful to speculate on what agenda might emerge if an Occupy revolution should come to power in the near future.

But the dominant system in America, corrupt as it may be, is most unlikely to yield radical concessions in a matter of months, as in the Arab Spring.  Hence we have the luxury of more time.  Christians should therefore work methodically to increase our presence.  To boycott the movement – like a few of my fellow KC’s have advocated – would run counter to our vocation in announcing the Good News.  Imagine if St. Peter and the Apostles had turned a cold shoulder at every chance to associate with members of the pagan majority in the Roman Empire!

We need to look hopefully and sympathetically upon idealism wherever we encounter it.  If disciples of Jesus can ignore the call to shun Occupiers, and if we press on when Occupiers spurn us, to that extent there is reason to be optimistic.

One of my fellow Tactical Team members, Joe Hellstern (not himself a Christian), wrote this:

…..How clever these young kids are!  I love them so much. We are all so inspired. We all have hope, perhaps for the first time since Jack and Bobby Kennedy were taken from us.
…..In fact these and other assassinations have produced, I suspect, a transcendent awareness – a reluctance to entrust our hopes to such leaders again, lest the ruthless people in power take them down as before.
…..Thus a powerful movement for change has sprung up, a leaderless revolution, powered and inspired by the dispossessed of our society. God bless them and help them.

During this season of Christmas, I too am thankful.  But our machine-like society, in the face of which so many Americans cringe, inspires more resentment than gratitude – especially among the young who foresee much less opportunity than did my generation.  Regardless of how it turns out in 2012 and beyond, I’m sure that without the advent of OWS during the past few months, the year 2011 would have been darker with more despondency and despair.  The great thing about the rise of the Occupy movement this year is that it has engendered hope.
______

*US Conference of Catholic Bishops, “Faithful Citizenship: A Catholic Call to Political Responsibility,” 2003